The Father of the Bride (FOB) has more responsibilities than just paying for the wedding. For me, the most daunting of these responsibilities was the father-daughter wedding dance. I have never been considered “light” on my size-13 feet.

My history of slow-dancing is not impressive.  My performance at my senior homecoming was so terrible that my date (who was very cute) never spoke to me again.  The dancing at my senior prom was such that my date soon moved out of the country.  The last time I slow danced was at my friend John’s wedding.  I was a groomsman and had to dance one song with a bridesmaid.  Of course they paired me up with a woman with enormous hooters which were protruding ominously out of her dress.  So I am trying to maneuver this woman around the dance floor without making contact with her trophies, as my wife carefully watches.  I also am aware that if this chick decides to unexpectedly give me a neck-nuzzle, my life is going to be hell for an indefinite time.  No one can be expected to perform well under those circumstances.

My daughter knew the dance could be a problem so she selected a song that was easy to “shuffle” to. Her expectations may have been low; however the standard for this dance had been set by my brother-in-law Mike a year before.  Mike had actually taken lessons to prepare to dance with his daughter Hannah at her wedding.  After Mike danced admirably and knowing my turn was coming up, the women folk in my family all asked: “Oh Don, are you going to take dance lessons before Cassie’s wedding?

I considered this an outrageous question.  Of course I am not going to have any dance lessons.  In my opinion, I consider this behavior a violation of the “man code”.  However, I will grant Mike an exemption because this dance was very important to his daughter.  Still, I hold Mike completely responsible for everything that ended up happening.

Mike had indeed raised the bar, so I needed a plan and the plan was this: I would watch instructional YouTube videos to learn how to dance and then surprise everyone at the wedding with my outstanding moves on the dance floor.

I found several how-to videos and studied how the men smoothly glided their partners around.  This looks pretty easy.  I’ve really got this.

The videos emphasized the importance of footwork.  Even though I am not a dancer, I am an athlete so I fully understand the concept of proper footwork.  I played basketball in high school and Coach Wendmore taught me the proper footwork for playing low post defense and I reasoned those same principles would be useful in slow dancing.  It’s like guiding your partner away from the hoop so you can grab the rebound. Yeah, that’s it. I’ve got this.

Then the big moment came.  My daughter thought we would going to “shuffle”, but then I assumed the proper dancing position.  She said, “Oh, are we going to waltz!” and then the music began.

We literally got off on the wrong foot. My daughter was surprised alright but she was not adapting well to this situation.  My niece Hannah, who of course knows how to dance, quickly determined the problem and shouted out, “Cassie, let him lead! Let him lead!!!!!!!!!!!!”

But it is not Cassandra’s nature to be led, something her new husband will find out about soon enough.  So we ventured on in an ugly manner, one side pushing and the other side pulling, but at no time was there any coordination or progress. It was an interpretative dance which represented how the U.S. government functions today.

I hoped the dance did not look as dreadful as it felt, but those hopes were crushed when the heckling started from the crowd.  And those hecklers were my friends, who someone in a moment of horrendous wedding planning had seated at a table right next to the dance floor.  When you get heckled by your enemies you know you are performing poorly, but when you get heckled by your friends, you know it is horrendous.

It turned out to be one of the worst father-daughter dances ever.  Thankfully the photos make it appear that we actually are dancing well.  Fortunately there is no video of this 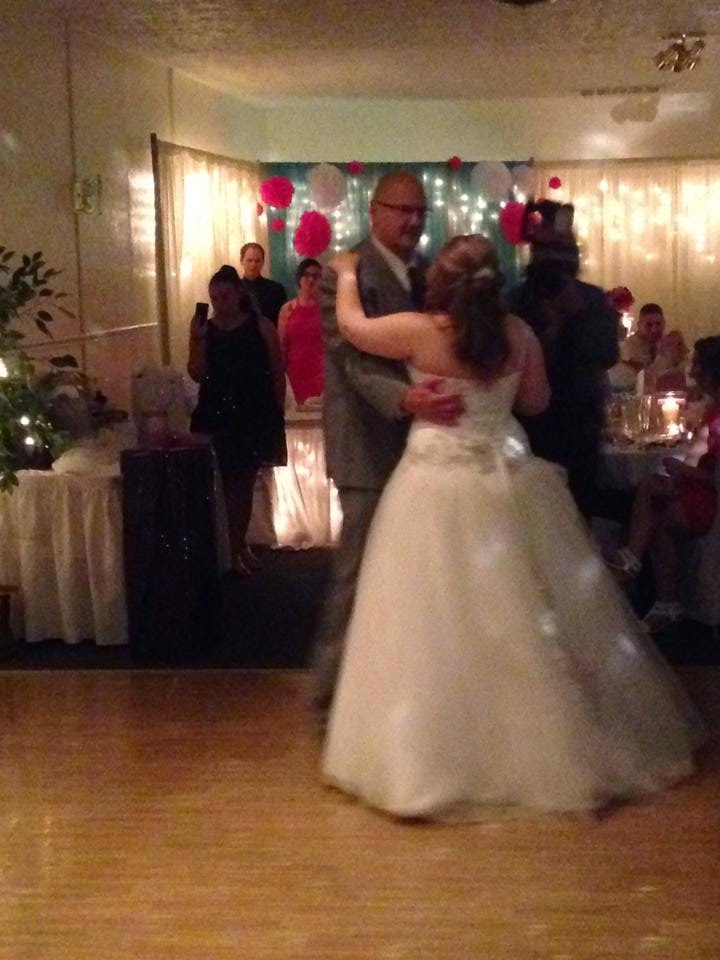 debacle.  There was, but destroying a couple smart phones is nothing compared to having a YouTube video go viral.

This was an utter personal failure.  It was one of the worst ideas I have ever had. No, I did not have this. I never had this.  This was embarrassing. In the middle of this joyous occasion, I felt horrible.

And then something totally unexpected happened.  It’s one of those special moments that you remember forever.  Later that evening my daughter sought me out and took me aside.  I thought something was wrong at the reception that needed attention.  Then she said:

“Dad, you danced really great. I didn’t know you could dance like that, thank you.”

In the world’s eyes, I am a terrible dancer.

In my daughter’s eyes, I am a wonderful dancer.

While these views are diametrically opposed, only one of them matters at all.
Posted by Don Ake at 1:41 PM