Colons Need To Be Tougher Than This

I need to make everyone aware of a potentially explosive situation before it gets totally out of control.  A man in Virginia has been awarded $500,000 in a lawsuit because he was insulted by the medical staff during his colonoscopy.


I am not making this up.  Somehow he recorded the derisive comments while he was sedated. These bored colonoscopy professionals reportedly made insensitive and mocking remarks during the procedure.  The man sued them and the jury awarded him the cash on four separate counts.


This is alarming and I strongly disagree with the verdict.  Because in effect, wasn’t it the man’s colon that was truly being insulted?  Therefore, I contend it was really his colon taking the legal action and it was his colon, that was awarded the money.


Our culture has become overly sensitive and gets offended by everything and anything.  We have become a nation with the emotional maturity of a whiny three-year-old. And now even our colons are getting offended and bringing lawsuits.  This must stop now.


I do not want an overly sensitive colon.  I do not want it to get annoyed at the mildest irritation.  I do not want it to go into convulsions if offended.  I want a tough colon, a colon that can withstand the worst aggravations and insults and still operate at peak performance.  I want a colon that can literally take it in – and then dish it back out (the other end, of course).  I guess what I really want is a Donald Trump-like colon, but with better hair.


If we permit our colons to be overly sensitive and then hire lawyers to bring big lawsuits, then I personally am in big trouble.  I fear my colon would immediately sue me and my hemorrhoids of course would join in on the lawsuit.  I would hate to have to testify during this trial:


Colon’s attorney: Mr. Ake, was your colon if fact spastic on the morning of October 3?


Colon’s attorney: Would you like to explain to the jury what caused this?


Colon’s attorney: On the evening of October 2, did you not dine at El Sheetzafirro Mexican restaurant with your friend Tim and three other guys?


Colon’s attorney: And did you not order the Fuego Loco, 5-alarm burrito, with a side of sriracha sauce?


Colon’s attorney: And did you not in fact comment after ordering, “I’m going to have fire shooting out my a$$ tomorrow!”


Me: I was just trying to impress the rest of the guys.  I was the oldest and as a middle-aged man it is important to try to prove I still got it.


Colon’s attorney: Louder, so the jury can hear Mr. Ake.


Colon’s attorney: Yes, it did. So much so, that smoke actually rose out the commode, did it not?


Me: Maybe just a few puffs.


Colon’s attorney:  And it was as that point that your colon went spastic to discharge the burrito and stop the burning sensation. Isn’t that true? Mr. Ake.


Me:  Yes, but it fully recovered after a few days.


Hemorrhoids attorney: Let’s move on to your hemorrhoids, Mr. Ake, because that’s where the scorching hot burrito ended up next.


Hemorrhoid’s attorney: And when the burrito was finally expunged from your nether regions, did it not cause intense inflammation and swelling of your hemorrhoids.


Me: Yes, it did, but I immediately went to the store to buy some medication to care for them. I don’t neglect my health!


Hemorrhoid’s attorney:  Your Honor, I would like to enter Exhibit 1 into the record.  This is a copy of the receipt from the drug store on October 3.


Me: Yes, I was just trying to save some money.


Hemorrhoid’s attorney:  And exactly how much money did you save


Me: Not very well.  My hemorrhoids were still very irritated.


Hemorrhoid’s attorney: So what did you do next?


Me: I scratched them 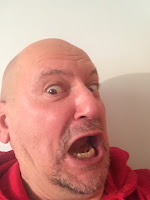 
Hemorrhoid’s attorney: HE SCATCHED THEM! HE SCRATCHED THEM!  JUST WHAT TYPE OF A MONSTER ARE YOU?


Colon’s attorney: I now want to enter Exhibit 2 into the record.  These are images of Mr. Ake’s recent colonoscopy.


Me: (to my attorney) Aren’t you going to object?


My attorney: Heck no, I want see this! I think everyone wants to get a look at these.


Trust me, no one wants to see that. And this is why colons and other body parts should not be allowed to sue people.  Everyone in our society needs to be less sensitive about being offended by stupid stuff and toughen up.


But seriously, you do need to have your periodic colonoscopy.  And it is also probably wise to treat your colon with some respect.
Please buy my new humor book - Just Make Me A Sammich http://donake.net/just-make-me-a-sammich-book