(I am vacationing in Florida, but the vacation is being ruined by Tropical Storm Colin)


I can imagine George Harrison being on vacation during a tropical storm, gazing into the dark clouds over the ocean. Suddenly he sees a glimmer in the distance and is inspired to write “Here comes the sun! And I say it’s all right!”


But the sun is still nowhere to be seen here, and it is not all right, it is not close to being all right.  If Harrison was writing about the current conditions, he would no doubt be so bummed that he would ingest mass quantities of drugs and write a horrible, unintelligible, song containing many swear words. This composition would not make the Billboard charts.


Now the worst of the storm has passed. There is still a gusty wind and a steady rain, but this does not deter people from emerging from their refuge to reclaim the beach. However, it is difficult to describe the immense damage and utter destruction caused by Tropical Storm Colin.  None, I repeat, none of the young women walking on the beach are wearing bikinis. This is a tragedy of enormous magnitude.  It is a severe bikini shortage. It is a bikini crisis.


It is June, it is the afternoon, it is Siesta Key, the second best beach in America.  I am here on vacation and there are no bikinis.  I am devastated by this tremendously woeful situation.  The women walking on the beach are wearing shorts and t-shirts.  But not tight t-shirts, and unfortunately the rain is not heavy enough to spur an impromptu competition.  Some of these women are even wearing long pants. Just let that sink in for a moment.  No bikinis, long pants.  And they are walking, not strutting. One does not strut on the beach in long pants and t-shirts because there is no point in doing that.  I’m sure some of these ladies are incredibly beautiful, but I can’t tell, because there are no bikinis, none.


Somebody pointed out to me that I really should not complain about the weather in Florida since the flooding in Paris is so bad that they had to close the Louvre.  “How would you have liked to flown all the way to France and then had your vacation ruined?” they said.   This is of course kooky-talk. Because I choose to visit the sunny beaches of Florida, except there is no sun.  If they ever put Mona Lisa in a thong bikini, I might consider vacationing in France (I wrote that last sentence to be at the top of the search results when someone Googles “Mona Lisa thong bikini”). 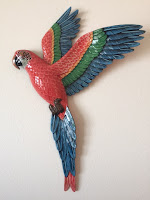 But I am not out lazing on the beach. I am going stir crazy, locked inside this condo, being held prisoner by that bastard Colin.  Sometimes I just stare at the walls. I notice that the condo has a “parrot” theme. Normally I wouldn’t even notice, because I wouldn’t be inside, I would be outside, on the beach, the sunny beach.  But now I glare at the stupid parrot artwork on the wall, as it mocks me.


“Look at me pale, vacation-boy.  You don’t want to see me, but you have to. Caaaaawrk! No bikinis for you! But you can always check out my tail feathers, caaaaaaaaaaawrk!”


I could watch more TV, but it is a dinky 42” model, with no HD.  I repeat, no HD, it is standard definition.  I didn’t even know that still existed.  And the Internet is not high speed, so I can’t even surf as fast as I can at home even though I am at the ocean. But there is only so much “Judge Judy” I can watch. On the last episode, a woman boyfriend agreed to pay for breast implants, but only paid for one.  Now she is having problems staying upright.  I wonder what Judge Judy looks like in a bikini?


Author Stephen King has a $9-million mansion nearby on the beach.  During a break in the weather, I sashayed down there hoping since I am a fellow author, we might share some wine and brie and have a discussion about our craft.  I was thinking I could give Stephen some pointers about how to incorporate humor into his stories to make them less scary.


I found the front gate and told the person on the intercom that the author of Just Make Me A Sammich wanted to chat with his buddy “Steve”.  For some reason, the line then went dead. It must be defective. You would think for $9 million you could get a intercom that worked.


So I stood at the gate yelling “Sammich!, Sammich!”


Soon a lackey appeared and informed me that no one there had ordered any sandwiches.


“No, not sandwich”, I explained. “Sammich, sammich. Just Make Me A Sammich”.


He just stared me.


“Do I look like the Jimmy John’s delivery guy?” I asked with disdain.


Okay, so apparently I do.


They keep talking about the dangers of riptides during the storm, but I think I am in danger of being ripped off.  So I marched down to the rental office and demanded a refund for the two days of rain during my stay.  The guy refused and said no one can guarantee sunny beaches. C’mon, it’s Florida, I wasn’t born yesterday.  The beaches are supposed to be sunny all the time.  I’m being ripped off.  But when I protested again, he just started angrily screaming at me “Sunny Beaches! Sunny Beaches!” and chased me out the door.  I don’t understand, this is all that I want. Just give me a sunny beach, please! This has to be the worst vacation ever.


But now as I write this, something miraculous is happening.  The clouds have parted, it’s getting brighter. Yes, it is really happening and I am inspired!


Beachy beauties, it seems like days since it’s been bright


And I say, yeah all right!