My Superiority Is Carved In Scone

After a recent dentist appointment, I stopped at my favorite coffee shop/bakery to reward myself with a delicious cappuccino, as I always do.  As the barista was preparing my drink, I realized I needed something for breakfast and began to peruse the offerings.

To my left, I spotted two humongous muffins. No, I am not referring to the waitress (and how dare you think that I was), although she wasn’t a flatbread.  These actual muffins were indeed huge, but perhaps too big. Even if the muffins were tasty, there was just too much muffin.  I know some guys will claim that muffins can never be too large, but I decided to pass on the muffins.

To my right, were a cornucopia of baked goods.  There were the standard cupcakes, pastries, etc. Then I saw it, a platter with four wedge-shaped confections.  The sign below read “Scones $3.00”.

Scones? I had heard of scones. Isn’t this something that queens nibble on with their afternoon tea.  I didn’t know they still existed.  I wasn’t even sure they were  legal, in the great-again United States.  But the scones intrigued me. Why were they $3? They surely didn’t look like they were worth $3. The muffins were only $2 and they were much bigger than these flattish wedges.  I should get the muffin, I thought.

Yet, the urge to try something new was pervasive. The barista returned with my cappuccino and asked if I wanted anything else.

There were different toppings on the scones, so I assumed there were different flavors. I did not want the barista to know I was a scone-virgin, I wanted to come off as a debonair, scone connoisseur, a man of the world, and many, many, scones. Of course, even being concerned about how a bakery employee perceives me, reflects a personality flaw that I’m sure a therapist would have a field day with. But I’ll never see a therapist, because I fear that after the first session I would be locked up and heavily medicated, and who needs that?

So, I look confidently into the woman’s eyes, turn, gesturing to the scones, and with my best Raymond Reddington voice and expression:

“The scones, what types do you have?”

She promptly rattles off the four flavors.  A couple were very fancy.  I’m in new territory here, so I keep it very simple.

“Lemon, please get me the lemon”.

She wrapped up the scone and I realized I had just paid $3 for some unknown, apparently fancy food. The scone was heavier than I expected, maybe I had spent $3 for a lemon rock.  I hope it doesn’t bust my teeth, which would be ironic, coming home from the dentist and all that.  However, as I left the store with my cappuccino in one hand and the scone in the other, I suddenly felt exceptional.   This just wasn’t a typical glorified yuppie experience, no, I felt dignified.  I, Don Ake, was going to have a scone for breakfast and it was going to change my entire day.

I noticed a new hop in my step as I went to my car, not quite a strut, but much more pronounced than my usual gait. When I motioned a driver to proceed in front of me in the parking lot, instead of the standard side-wave of my hand, I gave her a stately, two-finger salute.  And inexplicably, I started to think in a British accent. By George, I started feeling rather chipper and distinguished, I did.

I was so excited about my scone, I never touched my cappuccino once on the drive 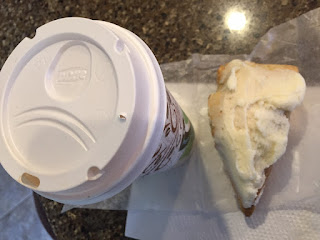 home.  When I realized this, I worried that the two flavors might be in conflict.  An English baked good with an Italian drink, ugh, I didn’t want to have a reenactment of World War II in my stomach.

I’ll never forget that first bite. Intense lemony bread, melting in my mouth, overwhelming my taste buds in an extremely delightful manner.  This is more than just a royal delicacy, it is the breakfast food of the gods.  Oh my! Yes, it was $3 very well spent.  It was so tasty that I didn’t even drink that much of my beloved cappuccino, as to not dilute that incredibly delicious lemony flavor.

After devouring the scone and finally enjoying the cappuccino, a strange feeling enveloped me.  Suddenly I felt massively elevated, privileged and empowered.  This was status food.  It had fed my stomach and also fed my ego!  I imagined myself superior to everyone else (Okay, I realize I always feel this way, but the scone made it worse).  It was almost as if I possessed magical powers.  That book should have been titled: Harry Potter and the Sorcerer’s Scone.  I thought I could achieve anything that day.

I began my work day (I work from home) and was soon involved in a debate with my co-worker Ron.  Silly Ron thought we should decrease our forecast 50 basis points because the Philly Fed Coincident Index had weakened.  I argued that the forecast should be increased 30 basis points on the strength of the Diffusion Index.  Everyone knows the Diffusion Index is a far superior predictor than the stupid Coincident Index, but Ron wouldn’t listen to me, as we went round and round about this.  Exasperated, finally I resorted to this:

Ron: I had toast

Me: That’s what I thought.  Well, I had a scone, so we are going to raise that forecast, you see.

And we did raise the forecast, because what could he say? I mean, I had a scone for breakfast and he only had toast.

Later in the day, I called my cable company over a disputed charge on my bill. The rep refused to listen to my explanation, so:

Me: Do you realize who you speaking with?

Rep: You said you are Don Ake

Me: You are speaking with someone who happened to have a scone for breakfast.

Rep: You had a scone?

Rep: I will remove that charge from your bill immediately, Mr. Ake and throw in a free month of Showtime. I am so sorry about our error, it won’t happen again.

Late in the day, my stockbroker called me with a hot tip.

Broker: You need to invest in Hightechia Corp. They have a new high-tech doohickey that’s going to cause a whiz bang in the market.

Me: I think I should invest in Amalgamated Scone and Strudel

Broker: What! are you stupid? A bakery instead of high-tech?

Me: Of course, you did. Well, I had a scone for breakfast, so buy some Amalgamated Scone and Strudel right now.

Broker: What’s the ticker symbol on that?

Me: It’s “A” something, something.

So you see, eating a scone for breakfast changed my whole day for the better.  You can be sure I will be stopping back soon to sample some additional flavors.  In addition, I am now prepared if I ever get invited to have tea with the Queen.  The scone is truly an amazing food.