Where Are My Fancy-Smancy Socks?

Stephen Hawking the so-called brilliant astrophysicist passed away recently.  I say “so-called” because I believe the guy was vastly overrated. He was a theoretical physicist, which meant he used all his extraordinary brain power coming up with these complex theories on the universe that no one could understand.

I mean he spent a lot of time just staring into black holes. So he was similar to, no better than a, well a –

(Okay, just insert your best offensive joke right here.  Just make sure it does not include the word “gynecologist”.)

The point is, he spent his time on very impractical things. Theories on black holes and the origins of the universe don’t improve my life in any tangible way. I, however, choose to focus my brain power on much more practical matters, such as:

WHERE ARE YOUR SOCKS THAT GO MISSING IN THE DRYER?
Now this is also one of the great mysteries of the universe, but it occurs very frequently under our own roofs. I had the occasion to ponder this question recently when my wife cleaned out her “sock refuge” basket and presented me with 14 orphaned socks.

It saddened me to look through the pile.  In included some great socks, a few I remembered from long ago and had only worn a couple times. How did these poor socks get orphaned and where, oh where, are their mates?

Now you may think this lost sock problem is insignificant, but you would be wrong, so wrong!  A study in England found that we lose 1.3 socks a month or 15 in a year. Which calculates out to 1,264 socks in our lifetime or $2,500. That doesn’t seem like a lot of money, but when you come to the end of your life and your funds are running out, that could be the difference between eating dog food versus a ham sammich. All because you couldn’t keep track of your socks!

I was relieved to see those statistics because I estimate I lost my 14 socks over about a two-year period, which puts my separation rate much below average. Still, I felt an obligation to match those socks up with their lost partners. This caused me to do something extremely uncomfortable for a man. I reorganized my sock drawer. Yes, you read that correct. I actually spent time going through my hosiery. Now I know this is not a manly thing to do, and it does pain me to admit it publicly. But I will argue that I should be able to retain my “Man Card” on the basis that the action was necessary to complete this very important project.

I found seven orphans in my sock drawer and I was able to match up all seven with the orphans from the basket.  Hallelujah!  14 lost socks had been redeemed.  I started singing:

Reunited, and it feels so good
Reunited 'cause we understood
There's one perfect fit
And, sugar, this one is it
We both are so excited 'cause we're reunited, hey, hey*

Now I do admit to owning too many pairs of those patterned, fancy-smancy socks. This is because my friend Jeff told me about Roger, who was the first man at his company to begin wearing fancy-smancy socks.  All the guys snickered behind Roger’s back at his gaudy hosiery, but even though Roger was an arrogant, disgusting, sunavabeech, he quickly rose through the ranks to become CEO.  In basketball it “must have been the shoes” but in the corporate world, it’s all about the socks, fancy-smancy socks.

I have worn fancy-smancy socks ever since. This discount store I shop at sells $3 socks for only $1. Only $1!  So I buy three pair.  Except that I don’t really need any, therefore I end up spending $3 I don’t need to, in order to save $6.  That’s shopper’s math right there.

My fanciest-smanciest pair of socks is shown here. Now I did not buy these. They were 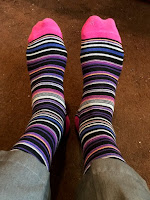 given to me to wear at my daughter’s wedding. I know posting this pic also threatens my “Man Card”, but the photo was taken on Easter when the church has ordained people to wear bonnets, pastels and all other gay apparel.

But where do the lost socks go? That study in England attempted to answer this, but its findings were lame. I decided to make like Stephen Hawking and peer into the black hole inside my dryer, but it was just too darn dark to see anything. I guess I’m just not as smart as Hawking. He must have had great night vision.

Now in the Church of Wayward Socks, the devil is static cling. I’m thinking the socks just get stuck to other clothing.  But if this was so, you would see people at the store all the time with socks stuck to their clothes.  One time my friend Lynn went to the store with a pair of panties stuck on her back. She claims it was an accident, I believe it was an advertisement.

I have two ideas to help mankind deal with this scourge. The first is to create a website, Sock-Match.com, where single socks create a profile to find their perfect match. But of course, there would still be some disappointments:

Yolanda says: He lied in his profile!  He claimed he was lavender, but he was aqua!  Aqua! We clashed right from the start, boo hoo!

But my best idea to determine where these socks go is to use modern tracking technology. All they have to do is put tracking sensors into every sock and then record where the lost socks end up. If they ever conduct a study like this, I will be first in line to sign up. And I will be sure to wear some fancy-smancy socks to the interview to make sure I am chosen!