A Very Crabby Time At The Beach

All I wanted to do this year at the beach was relax. I wanted no distractions, none. A strict zero-tolerance policy on distractions was in effect. Well yes, I might make an exception for any “beach bunnies” hopping around in thongs. But after all the stress I’ve encountered this year, I needed total relaxation with NO DISTRACTIONS!

Unfortunately, my peaceful beach oasis was disrupted on the very first day. I looked up to see the biggest, hairiest, most vicious spider I have ever. It was scurrying towards me, staring at me with its beady eyes.

I screamed “SPIDER! SPIDER!” as I struggled to propel my rotund body out of the low-sitting beach chair, ready to run arms flailing, screaming like a little girl, back to the condo. But my wife didn’t flinch, “That’s a crab”, she calmly replied.
A crab? Are you serious? What the heck is a crab doing on the beach?  I mean they live in the ocean with the rest of the seafood don’t they? What part of “sea” food don’t they understand? 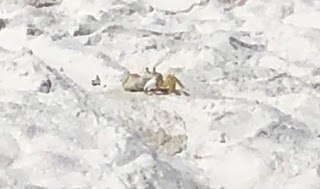 I remain on the beach, but I can’t relax because this crab keeps staring at me with those creepy, beady eyes. When I would stare back, with my beautiful, not beady, eyes, the crab would crouch back down in the sand. I would then go back to reading my Kindle, but when I would look up, there would be ol’ beady eyes staring me down.  So, I’m playing hide-and-seek with this crustacean instead of enjoying the day.

Even more disconcerting, this crab reminded me of an old boss who used to stare at me with those same awful beady eyes whenever I screwed something up, which of course I rarely did. And interestingly enough, this boss was very crabby. Coincidence? I think not, and not a pleasant flashback.

I wondered what I could have done to upset this crab and then I realized I had posted a favorable review of a local restaurant called “Crabs” on Facebook the previous evening. This must have really torqued him off! I didn’t know crabs knew how to use the Internet since they are a lower-life form.  But looking at some of things posted on social media, it appears there are many lower-life forms using Facebook.

The next day, I was totally relaxed, deep in a beach-induced coma, when I was literally shaken by a deafening roar from above. Unbelievably, the Blue Angels were practicing their routines over the beach for a show that weekend. While the other people on the beach, including my wife, were enjoying watching the maneuvers, this was totally unacceptable to me.  They should have been doing this “practicing” somewhere far away from the beach where I am chilling.  It is impossible to relax when the ground is shaking and your ears are ringing.

And the weirdest part of the whole vacation was when a woman walked over to me and asked what religious group the Blue Angels were associated with. I told her I thought they were Presbyterian since that denomination has historical connections with the color blue. My second choice would have been the holy order of the Azulians.

The next day I was rattled by the family of Hayden and Silas, camped next to us, which produced almost as many decibels as the Blue Angels. I know their names because their mother yelled at them every five seconds to get them to behave. But Hayden did not want to behave, he instead responded with the mother of all temper tantrums. I wanted to stand up and scream, “GET YOUR STUPID KID TO SHUT THE HELL UP!” Of course, in doing this I would be a 60-year guy throwing a public tantrum, which for some reason is socially unacceptable.

The fourth day was uneventful at the beach, but I was written up by the condo management for violating the rules. I had left my water shoes outside the door when returning from the beach. I laughed when my wife presented me with the yellow violation card.  Usually my wife yells at me for being a slob, and here I was trying to be neat by not tracking sand in the condo, and I get written up for it. 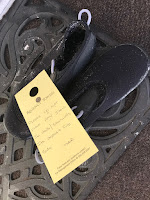 The last day was also relatively calm except for when this bodacious blonde strutted by in a string bikini. She had huge, er, nice, uh … let’s forget I said anything about this and assume I was able to overcome this disturbance.

The trip back was uneventful until we boarded the plane for the final flight. We were told the flight was going to be delayed because front lavatory was clogged. I assume that someone from the previous flight had unloaded a turd of Blue Angel-like magnitude, that was securely wedged in the commode.

This is totally unacceptable. Aren’t there laws against doing this? The “bomber” should be hunted down and charged with bringing a dangerous substance onto the plane and then depositing it in the lavatory.  It took two maintenance workers 40 minutes using a high-pressure water line to dislodge this enormous turd. It was stuck so tightly, the flight attendants actually flinched when it busted loose.

But overall, it was a great, relaxing vacation. So relaxing that I will be taking a few weeks off from blogging. Enjoy the rest of your summer!