I Smirk In Your General Direction

Hello, my name is Don, and I’m a smirker. I guess I smirk a lot.

Because it’s a personal trait I never really saw it a negative. But when I looked up the definition it said “smiling in an irritatingly smug, conceited or mockingly way. Other words used were: offensive, self-satisfied, insolent, scornful, contemptuous, affected, and “offensive smugness”.

I have to say that I disagree with all five dictionary sites I saw. I mean “smug”? I think being an author of two books, that I might know more than these hacks about what a smirk is.  And “conceited”? C’mon, would people love me as much as they do if that was true? Ha!

I will admit that my favorite TV character, Raymond Reddington (of the Blacklist, played by actor James Spader) smirks a lot. Interestingly enough, all those adjectives listed above apply to Reddington, they just somehow don’t apply to me at all.

And I don’t rely on just one smirk. Friends get a friendly smirk. If I don’t know you, you get a neutral smirk and if I don’t like you, you get a derisive smirk.  Okay, maybe that “scornful” definition could be true. 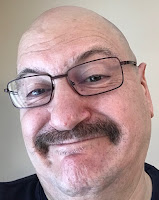 But there are people who believe I smirk an excessive amount. After I posted a photo from a trade journal on social media, complaining that they had caught me in “mid-smirk” (can you even believe I was smirking when they took the shot?), a friend responded with this: “I feel like mid-smirk is just a smoothing of your full range of expressions, which run from nascent smirk to over-the-top smirk.” And this comment is from a friend! When your friends are saying this type of thing, you certainly don’t want to know what your detractors are thinking.

I like to think I can control myself from smirking at inappropriate times. I do this by presenting a stoic, poker face. So if you ever catch me showing no emotion whatsoever, rest assured I am smirking fervently on the inside.

I once got into trouble years ago by smirking at work. The boss called me into his office to chastise me for a report I had done, that management didn’t agree with. He knew the report was true. I knew it was true, but we had to go through this ritual so I would write more agreeable reports in the future. But the best part of the conversation went like this:

Boss: And your numbers on Page 10 are all wrong.

Me: How are they wrong?

Boss: See this 97.2? You did it wrong. You can’t calculate it that way. Your logic is way off. Here’s my calculator, I’ll show you.

Boss: See you first take this number and you divide by this one and then you multiple by 10% and then and only then, can you subtract this number over here. So what’s the real value?

(The real answer is “math” but I couldn’t say it, so I just smirked broadly)

But this post is not about me. It is about a recent, ugly, incident in which a teenager, confronted by a stranger banging a drum in his face, chose not to respond with words or physical confrontation, but to smirk. Because he smirked, he was savagely condemned on the Internet and even received death threats. Well let me remind you that this is America, where smirking is protected by the Constitution and by the republic for it which it stands. I may not agree with your smirk, but I’ll defend to the dea,… well, to the point it becomes somewhat uncomfortable, your right to smirk it.  This was an I am Smirkitus moment. And I am proud to smirk with the smirkers! And if you disagree with this, well, well, (You know what I’m doing right now).

And I Stand With The Cows (Just not behind them)

Also recently, it has been proposed we eliminate cows because the tremendous amount of methane gas they emit is damaging the planet. This concept is totally demeaning and embarrassing to cows everywhere. They can’t help it they fart, and fart a lot. They have four stomachs, they eat grass, and it gestates in there for days. It’s not as if they can hold it in. Cows have been farting ever since they were created and I believe they have the God-given right to blast out methane wherever and whenever they choose. Heck Yeh! I stand with the cows – just not behind them.

First they came for the cows, because of their horrendous gas, and I did not speak out – because I was not a cow.

Then they came for the pigs, because of their atrocious emissions, and I did not speak out – because I was not a pig.

Then they came for the canines, because of their awful puppy gas, and I did not speak out – because I was not a dog.

Then they came for me – and there was no one left, brrraaapp, to speak for me.