I Declare Shenanigans on TV Advertising

There’s a commercial with “financial experts” advising you to invest huge amounts of money in silver. They say the stuff is cheap and if it goes up to its all-time high you are going to make a boatload of cash. (Of course, it only ever hit that price once, for a short time) Only smart people will in silver, and you are very smart, so buy some smart guy.

But: These guys are getting paid big bucks to hype silver, just so the silver company can get your big bucks. I hope they actually own some silver, but I can’t image they own much because: SILVER IS A VERY RISKY INVESTMENT! It’s more like spinning the wheel in Vegas than investing in a certificate of deposit.

All they talk about is the huge reward, with no mention of the huge risk. So …

There are several commercials about financial products which begin with older people hearing about some new-fangled type of thing that sounds “too good to be true” but then someone says they “did some research” and found out it was true, and it’s spectacular! Believe it! Believe it! Believe it!

But:  They did no research. None. They are impostors reading a script that says “I did some research”. Did they tell you to do your own research? No, they want you to call now, because that lackey has allegedly already done the research for you. The most ridiculous ad features a wealthy “real” actor, whose home is probably worth $6-million, saying he “did some research on reverse mortgages”.

Dude, if you mismanaged your multi-millions so horribly that you now need a reverse mortgage, then you are the last person I want to take financial advice from. So …

This commercial is about a men’s razor with a new whiz-bang design, that of course shaves closer than ever before without irritation! The guy in this ad claims he suffered for many years from shaving irritation but now, “this razor has changed my life”.

But: Hey Pal, Jesus can change your life. All this razor does is improve your shave. If your life is this dull, you don’t need a new razor, you need a new life! So …

But: How did these salespeople get into the houses? Unlawful entry is a crime. And in houses of where people own guns for protection, these commercials would end suddenly!

“My insurance is better … BLAMO!

The commercial with the pillow guy is creepy because he is somehow magically staring out through the other side of the medicine cabinet. But the woman he is talking to is wrapped in a towel, as if she just got out of the shower. Which means if the guy was peeking out from that cabinet ….. Whoa Nelly! So…

Numerous commercials for weight loss plans that promise to ship delicious (and very expensive) food right to your door! All you have to do is eat the food and the pounds fly right off!

But: Well, I do believe they are telling the truth that if you eat the stuff they send, you will lose a bunch of weight. I’m just not sure what you are eating is real food. I think it is all made from the same high-fiber goop and then “food artists” make it look and taste like something else. So that delicious lasagna they are all excited about is really just a lump of fiber painted red. And if you’re eating that much fiber at every meal, you’re going crap for five hours a day – and those pounds are going to fly right off! So …

The hundreds of prescription drug commercials that promise to improve your life immeasurably if you can fork over some serious cash and survive that long list of terrible side effects.

The people in these commercials look so happy that it looks like they may actually be glad they have the ailment, just so they are able to take this wonderful pill.

But: If fact, they just look too giddy. It makes you wonder what’s in that pill. Could all of these drugs just be different forms of medical marijuana? Maybe they snuck some LSD in there! “Look Grandpa is dancing down the middle of the road through traffic because he just dropped some acid!”

My favorite side effects are “confusion” – how are you going to know that the medicine is causing side effects if you’re confused? And “genital yeast infection in men”. Does that mean the drug causes you to grow a vagina, which then is infected? And if you get this infection, who do you think treats it? You want to clear out the locker room after golf league? As a man say, “Yes I am getting better. My gynecologist thinks it will be all cleared up in a week”.

Something is wrong with all these supposedly afflicted people being soooooo happy. So …

The commercials for new incontinence briefs as “sexy”. I know that the new products are much improved over the old products. Women and men feel better wearing something that doesn’t look and feel like an adult diaper.

But: It is still a diaper, a fancy diaper, but a diaper nonetheless. So don’t go showing it off to anybody and it’s best to still remove it as fast as possible in those “boudoir moments”. It does look better than before, but it is by no means “sexy” so … 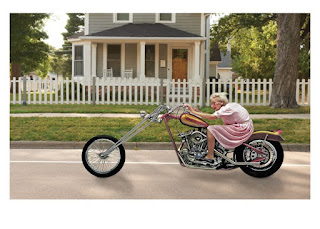 But: If you do take the bike out for a spin, I hope you are wearing the briefs mentioned above, just in case you hit a bump.

No! Assisted living and motorcycles do not mix! So …