The scorching Florida sun was baking me like a potato. The heat index just hit triple digits; my bald head drenched with sweat. My long day on the beach was done.

room. But it would be a most laborious journey back there. My right foot was badly swollen due to illness. I began the trek, every step on the shifting sands was painful.

I just needed to get across the beach to the spray station, an oasis as it were. I craved the cool water pouring over my steamed body, washing all the sand away. I trudged on, foot throbbing, hoping there would be no waiting at that fountain. I was fried, tired, thirsty and in pain.

I was joyful when I spotted the two spray stations up ahead. One was open, the other occupied by a mother and her two small children. I would be able to rinse off quickly and be on my way. 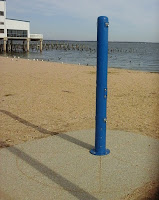 But then suddenly I spot three people off in the distance headed right for the open spray station. Under normal conditions, I would have quickened my pace and arrived there well before them. But I had no pace, I had one speed, a slow slog. I was still fifty feet away, when they got to the open shower. I felt like the Biblical paralytic who was always too late getting to the pool.

My attention quickly shifted to the young mother. She had already rinsed herself and was finished washing her daughter. All she had to do is clean her young boy and that spray station was mine!

But I watched in horror as the boy left his mother’s side and scurried about twenty feet away. I didn’t know his name, but soon everyone in the general vicinity would.

"NATHAN, NATHAN! Come here and get rinsed”, she yelled.

But poor Nathan was being a little snot, and Nathan would not come.

But poor Nathan would not budge. He then turned his back to his mother and pretended not to hear her.

The woman was getting upset and screeched “NATHAN, NATHAN! GET OVER HERE NOW!”

Poor Nathan responded to this by moving another five feet from her, never even looking back.

But poor Nathan was now being a little $h!+ and didn’t even flinch.
And into this drama, now enters the fat, middle-age, bald guy, perspiring greatly from the agonizing trudge across the hot sand.

What to do, what to do? I could wait for that little $h!+ Nathan to obey his mother and get rinsed, or I could step up, pull that lever and feel the cool water running over my sweltering body.

I suppose the charitable thing to do would have been to join the mother in a chorus of pleas for poor Nathan and wait patiently for him to respond.

Well, I’m not the nurturing type and who knows how long it was going to take to get poor Nathan over to that spray station?  And the sun was hot. Did I mention the heat and sweat and all that? And my foot ….

So without hesitation, and without even looking at the woman, I walked right over to the shower and turned on the water. And what happened next?

You have never seen a five-year-old run twenty-five faster than poor Nathan did. I actually didn’t see it. I was too busy washing off. But I heard him arrive back at the spray station, gasping for air.

Poor Nathan kept protesting, as his mother explained he would now have to wait. Of course, I totally ignored him. Yes, how does it feel poor Nathan when someone ignores you, like you just ignored your mother?  It doesn’t feel very good, now does it? Poor Nathan, poor, poor Nathan.

And then poor Nathan began to cry. Oh, not real tears. It was that fake-y type of crying and a weak attempt at it, I must say. It was so lame, I had to keep from laughing out loud, but of course I kept my head down as I smirked (I’m a smirker). Poor Nathan, poor, poor Nathan.

I finished washing up, neither going faster, nor slower, than I normally would. I turned off the water and left the area without acknowledging the mother or the boy. I imagine poor Nathan did not have to be persuaded much to rinse off this time.

Now you make consider me a big snot or even a big $h!+ for my conduct, but I have no guilt, no remorse. I feel that I was a guru teaching this youth an important truth. And poor Nathan learned a valuable life lesson that day about seizing an opportunity before it disappears. Sometimes these lessons are painful. Not as painful as dragging a swollen foot across the beach, but painful nonetheless. Poor Nathan, poor, poor Nathan.

As I trudged back to the hotel, I couldn’t help to lament over and over again. Poor Nathan, poor, poor Nathan.