This was an unusual honeymoon. Betty and Gene had only known each other for three months, following a ten-day relationship. Their infatuation, not even sure you can call it love at this point, was still burning hot on their honeymoon in Niagara Falls. This meant they engaged in frequent procreating activity. So, it should not be surprising that they indeed procreated during this trip.

Up to this point, they may have been living in a fantasy world, but it just got real. It GOT REAL, real tough, real fast. Betty and Gene had been acting like young lovers, but now it was time to face the adult world.

Betty called it her love-child. Maybe it was more of an infatuation-child. This was not the immaculate conception, but in their minds, it was a miraculous conception. A few months ago, they never thought they were ever going to be parents, and then without warning: Boom! Boom! Boom! Yeah, life was coming at them fast, and it was all good.

However, this unexpected, unplanned pregnancy created the first test of their still-fragile relationship. The intention was for Betty to keep working for a while until they saved up enough to have a child, but that plan was now shattered. You could argue that they should have been more cautious on that honeymoon, but remember, they had gotten engaged after knowing each other for ten days. Caution had been thrown to a whirlwind, and no one was thinking clearly.

The expectant baby created a crisis. Betty may have been willing to make sacrifices to live in that small apartment, but that concession applied only to her. She delivered an edict: “No child of mine is going to be raised in a small apartment.” This was non-negotiable. Gene had a big, urgent problem on his hands.

They needed a house now, but they had little money. The pressure was on; the clock was ticking, and there was no easy solution. Now you might expect Betty’s prosperous family to help them out of this jam. And family did step up, stepped up big time. But it wasn’t Betty’s family, incredibly, it was Gene’s Uncle Frank. Uncle Frank gave, not loaned, the money for the entire down payment. Sadly, Frank died a little over a year after this most generous act. (You can’t take it with you, so you may as well use it for great things while you are still here.)

This bailed them out of a tight spot. But you still have two strong-willed, stubborn, independent people, set in their ways, not used to compromise, with bad tempers, living in the same house. And they still don’t really know each other. Despite everything, how was this marriage ever going to make it long term? This union still had disaster written all over it, except for this wild-card they had suddenly been dealt.

The house was purchased, and the Kid arrived. And while usual circumstances put Betty and Gene together, the whirlwind of activity pushed them closer together. But long term, the thing that kept them together was the Kid. The Kid was the focus; he was the glue to this relationship.

No, they didn’t stay together in a bad marriage for “the sake of the child”. They made the marriage work.  They MADE IT WORK because there was something, well, someone, who was more important than anything. And making this relationship prosper was tough, difficult work in the early years. There was considerable conflict. Yelling, lots of yelling. But the anger never persisted; there were no long-term grudges. After all, there was a child to raise. This turned out to be one of those few marriages that got stronger and stronger over time.

Gene turned out to be a great father, remarkable because he was raised without one. He had no role model, other than those uncles. He recognized that his son had not inherited much of his mechanical ability, nor his love of hunting or fishing. But he never forced the Kid into being something he wasn’t. Gene passed along his Pennsylvania Dutch values to the Kid. You work hard for what you achieve, but you never brag about your accomplishments because you are no better than anyone else.

Gene was pleased the Kid had inherited most of his intelligence, and strongly encouraged his scholarly pursuits.  Gene knew how much he had been restrained by his lack of education and wanted the Kid to have all the opportunities he lacked. This was so important to him that even though the grandparents on both sides had provided full funding for the Kid’s college, Gene paid every penny of the costs himself.

Betty had extremely high standards for her son. She also knew she had fallen short of her potential due to health issues and circumstances. The fact that the Kid was being raised in a working-class home instead of something more prestigious meant that the Kid was just going to have to work harder to get where he needed to be.

So she pushed the Kid hard. He was expected to succeed because he was her son, and that heritage made him exceptional in her eyes. There was no ridicule for failures, but there was no compassion either. Winning was assumed. Losing is supposed to hurt. If you don’t like the pain you’re feeling, then perhaps you’ll put forth a better effort next time. But she also supported the Kid, guided the Kid, provided the best she could for the Kid, loved the Kid. And always, always wanted the very best for “her child”. 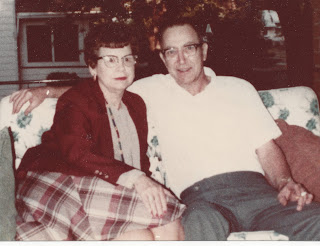 It began as a chance encounter in a small neighborhood bar. Two very different, desperate people infatuated with each other because they had only a few things in common: They were desperate to find love, they wanted a family, and they were quickly running out of time. But bit by bit, step by step, the relationship hung on, and then it flourished. It was patient, it was kind. It did not envy, it did not boast, it was not self-seeking. It was not easily angered (okay, this one’s a stretch), it kept no record of wrongs (this makes up for the last one). It did not delight in evil, but rejoiced in truth. It always protected, always trusted, always hoped. And it persevered -and never failed – until literally “death do us part”. It turned into love; strong, enduring love, in its purest form.

Next Time: Part 4 – The Epilogue - How did The Kid turn out?