Which Grandpa Do You Want Driving The Car?

Jan has a dilemma. She and her neighborhood friends need someone to drive them to volleyball practice. Everyone who normally does this is busy, so Jan must choose between her two grandfathers, Grandpa Joe, or Grandpa Donald to drive them. But who is the best choice to drive the car?

Some people would argue that both Grandpa Joe and Grandpa Donald are too old to drive and would be a danger behind the wheel. But they are very eager to prove they are capable drivers and much more skilled than the other in directing the vehicle.

However, Jan is leery of letting either one of them drive the gang to the gym. But these are her only choices, so she thinks long and hard before her decision.

Grandpa Joe is really a nice guy. He smiles a lot, laughs a lot, and everybody likes him. But lately, Grandpa Joe has increasingly been showing his age. Sometimes he doesn’t know where he is or what he is doing. He gets confused quickly and often says stuff that doesn’t make much sense.

Grandpa Donald still has most of his mental faculties in place, however he is totally missing that filter that prevents offensive and sometimes ridiculous statements from leaving his mouth. If he thinks it, he just says it, with no regard of how people will interpret or respond to it.

Grandpa Joe will adamantly insist he can still drive the car, but Jan has her doubts. He is going to need lots of help on the drive to school. She can tell him when to turn, but he might be rambling aimlessly about how he once played volleyball naked. And lately, Grandpa Joe has started making too many left turns, sometimes resulting in him driving around in circles and providing no clear direction.

Grandpa Donald will boast that he is a great, great, driver – possibly the greatest driver ever. But he’s not. He drives recklessly and all over the road. He zips through 4-way stops and often blatantly runs red lights claiming, “Those rules don’t apply to me.”  If there are pedestrians in the street, he doesn’t brake for them shouting, “They are here illegally, and it is my job to protect the curbs.”

If Grandpa Joe is chosen, Jan wants to make sure all her friends get in the car quickly. Because Tiffany uses that fruity, herbal shampoo, and Grandpa Joe enjoys sniffing girl’s hair. And there was that incident last year when he tried to give Sheila that shoulder massage when they both happened to be over at the house.

If Grandpa Donald is chosen, Jan will hope he doesn’t find out that Aniellka is Nicaraguan and ask how her parents got into the country. He might even ask her for proof of citizenship. And hopefully, he won’t brag about how he built that wall on his property to keep the Honduran kids out of his yard.

If Grandpa Joe is chosen, the gang will bolt from the car because it was a long and frustrating trip, where the driver was confused and preoccupied from beginning to end. The worst part was when he aimlessly started singing along to a different song playing on the radio. Jan is concerned that Grandpa Joe won’t be able to find his way back home without some help after dropping the gang off. But he assures her that he can call his friend Kam, if he is no longer able to drive the car himself.

If Grandpa Donald is chosen, the girls will rush from the car because it was a fast and harrowing trip, featuring numerous traffic violations and several driving maneuvers the girls had never experienced before and never want to see again. The worst part is when he became upset with another driver and screamed some vulgarities out the window, some of which the girls will have to Google when they return home. Jan is concerned Grandpa Donald may stay and watch volleyball practice, shouting “Loser” when somebody misses a shot. 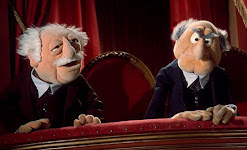 Jan has a difficult choice to make. She wishes there was another way to get to volleyball practice, but there isn’t. She must choose one grandpa or the other.  Which one will it be?