This Year’s Weirdest Christmas Gift Ever!

Several years ago, at Christmastime, I began donating a goat for poor people through ChildFund International. While I admit it’s kind of a gimmick to get you to donate, it is a legitimate thing. I wrote about this a few years ago, and the essay appears in my book Turkey Terror At My Door! (If you want to send a goat to Africa, click here)

I wanted to use ChildFund’s photo of the African kid holding a goat in my book, so I sent a copy of the essay to the head of the organization with my request. The woman didn’t find my writing all that humorous, but let me use the picture. In response, I did tone down some of my wisecracks.

The purpose of the goats is to provide milk to their hungry owners. I enjoyed giving a goat so much that  I started giving two goats. I was ready to do the same this year when I noticed another option. Instead of giving two female goats, I could donate a pair of breeding goats. So, when the female goat wasn’t supplying milk, the couple could get busy and end up creating a Ponderosa full of goats.

I was intrigued by this idea, so I decided to go with the breeders because my gift could potentially populate the continent with goats and solve world hunger. Because that’s just the type of guy I am. 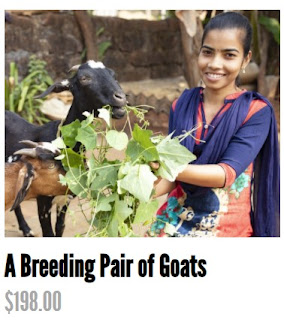 Here Is Your Mission – If You Decide To Accept It

But then, of course, I began to worry about what could go wrong with my master plan. Did my male goat truly understand his mission? Does he know he is supposed to impregnate his traveling companion as soon as possible after arriving in Africa? Wonder if my goats are not compatible lovers? What if she is a stuck-up bitch goat, and this turns him off?

Now my fears were spinning out of control. Could he be a gay goat? There is such a thing; it’s called a gayoate’ (please don’t look this up). I’m really hoping they check this out before they ship him out. Maybe show him photos of some hot goat babes and see how he reacts, because I ain’t paying for a gay goat. And this has nothing to do with discrimination or bias. Bucky, the goat, has only one job, and he can’t do it if he is climbing up the wrong hill.

On average, every 21 days, the female goat enters this thing called estrus – not to be confused with the character on Gunsmoke, or people in the Bible. She stands in the ready position for up to 36 hours, waiting for the male to mount her from behind. And then, in the time it takes to say “Wham, bam, thank you maaaam”, it’s all over. Yes, he finishes the deed in just a few seconds. She doesn’t even know who did it, and you can bet he’s not going to text her in the morning. This explains why there is no porn for goats; if they blink at the wrong time, they miss the whole thing.

But guys, this does give you an out the next time you are premat … uh, you can’t hold ah, there’s a fast finish. Just tell her, “Hey, I lasted longer than a goat!”. Please let me know if that one works.

Therefore, this year I am experiencing the joy of Christmas by sharing the joy of goat sex. I hope my stud goat soon arrives in Africa and gives her what she needs, if only for a few seconds. Because Christmas is all about giving – and this year, also about fantastic goat sex.