The Big Gulp is Way Too Big For Buddha!

The Mayor of New York City sure got everyone riled up with his proposed ban on large “sugary” drinks.  The reaction has not been very sweet at all.
I think the issue is very confusing to most people.  For example I’m sure many older adults cannot understand why anyone would want to drink that much in one serving.  And for anyone with “piping issues” regarding the bladder or the prostate, imbibing that much carbonated beverage would seem ludicrous indeed.  Why even the thought of downing that much soda pop would cause… uh oh eh, oh no.  Please excuse me for one moment.  I’ll be right back………. 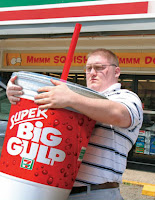 Ah, that is much better, yes.  Where was I?  Okay, people don’t like the ban.  But in the words of South Park Guidance Counselor, Mr. Mackey: “Pop is bad, mkay”.  You shouldn’t drink pop, because pop is bad, mkay.”
And pop is bad. Studies have shown that the combination of high-fructose corn syrup and phosphoric acid will rot your innards (this is a medical term).  And diet pop is supposed to be even worse for you although scientists don’t know why yet.  This should scare the hell out of everyone, but it doesn’t.  The proposed ban doesn’t even apply to diet soda which may kill you faster.


Still, Americans don’t like the government telling them what they cannot have.  My socially-conscientious friend Anne was outraged when she first heard about the proposed law.  Even though she lives in Ohio, she had this ravenous, almost insatiable, craving to consume a Big Gulp.  When her boyfriend heard about this, he immediately told her that the mayor of her town was thinking about banning sex between single people in her city.  I don’t know if Anne has calmed down any because I haven’t heard from her (or her boyfriend) in days.
But do you really need that much soda?  Back in my day, fifteen cents got you a bottle of Coke from the vending machine in my grandpa’s grocery store.  You didn’t gulp it because it was only 6 ½ ounces and you needed to savor every sip.  Sure we were still thirsty, but we could still fit into our britches and we didn’t get diabetes as kids.  No my generation gets diabetes when we get older. And we get it by eating too much pie, which is the proper way.  And encouraging people to gulp pop creates excess intestinal gas which negatively impacts us all.
And there have always been fat kids.  Growing up I lived across the street from a kid my friend Fred referred to as “Whoa-Jelly” his brother was called “Whoa-Jam”.  When this huge kid ran barefoot down the sidewalk, there was fat shaking everywhere, which always prompted Fred to yell out “Whoa-Jelly, Whoa-Jelly, Whoa-Jelly”.  The problem is that while Whoa-Jelly was an oddity then, he is everywhere now.  We are becoming a Whoa-Jelly nation.  Of course in the past there were these people who actually put limits on what children ate, drank or did for their general welfare.  These people were known as “parents”.  I’m not sure where these people went.

Nobody really needs that much soda pop at one time, but the government telling us how much to drink is too intrusive.  I guess we can still consume, but in moderation.  However, the recent health studies tell us that maybe “moderation” should be way less than we current consume.  Yes, we all need to be Buddhists on this one.  Drinking a Big Gulp is not Zen-like in any fashion.
One shudders to think what could have happened in the Big Gulp existed in Buddha’s day. I’m sure it got steamy sitting under that fig tree all the time and you know that figs taste great with Pepsi.  If one day Buddha got really hot and thirsty and said, “Forget this moderation stuff and bring me a Big Gulp” now!, the world would have been deprived of a major religion.


From My Other Blog: The dangers of high fructose corn syrup
Posted by Don Ake at 4:01 PM