Steroids Are Legal In This League

In 2013, Major League Baseball responded to its latest steroid scandal by finally decided to get tough and enacted a lifetime ban on all players who were found to be using performance enhancing drugs. (Okay so maybe this is a fantasy tale).  In response, the banned players and a group of “Mark McGwire wannabees” formed a new league, “Roid Rage Baseball” and began play in 2014.

We pick up action in the 5th inning in a late season game between the Boston Biceps and the New York Needles, Skip Scary and Joe Bulk on the call:

Skip: No outs, two on for the Biceps. The next batter is Brian Brawny, but there seems to be some delay.

Joe: Brawny is having trouble finding a batting helmet that fits.  He had been using a size 12, but it looks like he’s ready to move up to the 14.

Skip: The head size has become a real issue with Brian.  I really look for him to go for the home run here so he can walk around the bases.

Joe: That was really unfortunate when he got that single last night and kept tipping over when running the bases.  Not only did he get tagged out, but it took two guys to set him upright. 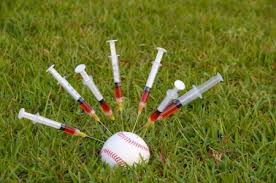 Skip: Brawny is finally set in the batter’s box and takes a 140 mph fastball high for ball one.

Joe:  Brawny has recently been on a tear lately with 12 homers in his last 4 games.  He currently has 140 for the season which is second in the league behind “Steroid” Sam Cooper’s 155.  The Biceps trail 20 to 17 so they could use one on Brawny’s tremendous 780-foot jacks right now.

Skip:  Brian credits his new Rawlings sports bra for his recent success at the plate.  It seems his man-boobs were interfering with his swing, but the bra offers the support he needs to swing smoothly through the ball.

Joe:  You can remember the commotion starting back in May when he moved up from the formula VX 30 to the VX 40 and he started to sport some serious hooters.

Skip: Yes, it got so bad at one point that his teammates refused to shower with him!  Then eventually everyone moved up to the VX40.  Now shower time resembles a “Girls Gone Wild” video.

Skip: Fisher fires a 120 mph cutter on the corner for strike one.

Joe: What a pitch! Does Hiller need a new mitt after that one?

Skip: No, he’s using that new Kevlar mitt.  Not only can it withstand the cutter, it has greatly reduced the number of broken hands.  This is a great improvement. Remember the league went through 31 catchers in its first month.

Joe: The other thing that has really helped Brawny is that he’s has grown a fully functional third eye.  At first they thought it would be a third eye blind, but it’s not.  He now has 20-15-20 vision.

Joe: No need with Brawny at the plate.  And remember in June when Wilson stole third, but couldn’t stop and ran straight through the stadium wall and landed in the third row?

Skip: Yes, but team pharmacist Jerry “The Juice” Frazier said he dialed back Wilson’s meth hits to two per day. Not only doesn’t he shake as much, but he is chewing his food so much better!

Skip: Brawny swings and misses at a smoking hot fast ball that registers 157 on the radar!

Joe: What’s with Crawford at first base?  The guy is really scratching up a storm.  I mean baseball players scratch, but this looks excessive.

Skip: That’s because he had nad replacement surgery last week.  He did that pop-up slide in a game against Detroit and unfortunately they popped out.

Joe: We have seen other players have a problem with this.  The synthetic nads are great, but they can be very irritating until your body adjusts.
Skip: Fisher to the plate and oh no, Brawny has been hit by the pitch.

Joe: That fastball was clocked at 162 and the ball has cracked in two pieces in front of the plate.

Skip: That’s not the only thing that cracked; Brawny’s forearm is laying just to the left of the batter’s box.

Joe: Yes and here comes the limb retrieval squad racing on to the field.

Skip: That is a bad break for the Biceps. Remember when Strickland suffered the same injury in June; he was on the disabled list for three weeks.

Joe: They will have to shoot him up with some formula CF-45, that stuff is great for healing this type of injury!