Surprisingly, the mall wasn’t that crowded.  I assume more people were shopping on-line this year, maybe because of all the credit card fraud at some major retailers.  When on-line shopping is the safest option, you know there is a problem.  I was going to buy a Sony television but I was afraid I would end up also buying Christmas gifts for thousands of North Koreans.  A “North Korean Christmas” (Oh, let’s see what Little Kim Jong-un got this year!) might make a heartwarming Hallmark movie, but it would be a horror movie when I opened my credit card statement.

Shopping In The Cloud

My first stop was Yupperman’s department store.  The perfume cloud at the front of the store was so thick this year that it coated my body.  Normally I would be concerned about arriving home reeking of perfume, but this is the expensive stuff worn by classy ladies.  My wife knows that women this refined would not be cavorting with the likes of me.

I think I figured out why these stores create the perfume cloud.  Once guys get coated with this stuff, they may feel more feminine and be tempted to become transvestites.  “Hey, I’m already wearing women’s perfume; maybe I should get some women clothes!”  You may scoff, but the women’s clothing section is located next to the fragrances. Coincidence? - I think not.   Don’t worry; it did not work on me.   Yupperman’s clothing is much too classy and expensive for a cheap tramp like me.

At my next stop, the perky sales clerk insisted on explaining the Super Duper Customer Loyalty Program in excruciating detail. The program is about as complicated as quantum physics and twice as boring.  As far as I can tell the program has something to do with earning “points”.  But as a guy, the only points I care about are how many Ohio State scored in the Sugar Bowl, which are 42 and how many points are prominent in the latest Jennifer Lopez video, which are always “2”.

Camping Out At The Mall

I had problems navigating around the calendar kiosk because some guy decided he would park his baby stroller in the main aisle.  Only this was not a traditional stroller, it was a baby Winnebago.  It had enough storage space for a camping trip to the Alaskan wilderness.  I can’t imagine a baby owning enough stuff to store in that contraption; perhaps these people shop at Yupperman’s.  I just hope they eventually donate that to a homeless person (and his family).

I was surprised the daily calendar “What Your Poo Is Telling You” is still very popular.  I was again tempted to buy it, but realized that it would be giving me shit every day this year, which very accurately describes my previous job.  No, I’ve already lived that year and never, ever, want to do it again.

I Lost My Head Over This One 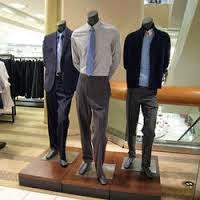 I was very offended to see that the male mannequins in one department store were all headless.  This is highly insensitive considering recent world events.  If we make mannequins already without heads, then the terrorists have won!  Either that or the store is implying that men are brainless when it comes to fashion decisions, so women need to buy them some decent clothes.  And we all know that it so not true.

I Skipped The Free Food Sample

But the weirdest thing I saw at the mall was this Asian guy handing out food samples in front of the Japanese food stand “Wok This Way” in the food court.  I noticed that he had this strange, slightly angry, expression on his face and I wondered why. I think the guy was in fact half-Asian but was contorting his face to appear full-Asian.  He probably thought he could hand out more samples if he looked more authentic and I do admire his dedication to his job.


Of course I cannot fully describe exactly what he was doing without being extremely offensive and horribly politically incorrect.  You will have to figure this one out on your own, since I would not want you to have a slanted opinion of me.
Posted by Don Ake at 4:42 PM