There is a big dust up at my alma mater The University of Akron.  Seems they spent $950,000 renovating the university-owned house for their new president and then the guy comes in and up and fires 161 employees.

This got the college community in an uproar.  And if that wasn’t enough, someone made a jarring discovery, a literal jarring discovery, which further enraged the masses.  A review of the itemized expenses on the renovation project shows the purchase of a jar of olives that cost $556.

I thought people were overreacting way too much about this.  I am a member of the “cooler heads” because it is said “cooler heads prevail”. I am one of the coolest heads around and I never overreact about anything, so I gave them the full benefit of the doubt.

There are a couple simple explanations why someone would pay $556 for a jar of olives. Maybe they bought them at the warehouse club and there was like a million of them in the jar.  So this, in fact, was a great deal.  They might be planning on including these olives as free appetizers during university 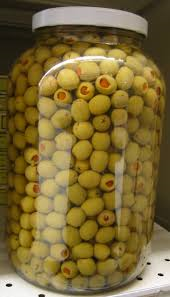 functions.  I love olives and you know how I feel about free appetizers, so this would be a very prudent use of funds in my opinion.

Another explanation might be that these are very special, exquisite, gourmet olives.  Grown in exclusive, organic, groves in southern Greece and fertilized by the dung of massaged, coddled, Kalamatatian, sheep.  You can’t really judge the cost until you taste these olives now, can you?  If you feed these delicious, magical, olives to donors and they write you huge checks, then $556 is a true bargain.

But then I found out that this was not a jar of olives, but an olive jar, an empty olive jar.  My reaction of course was calm and reserved.

ARE YOU FREAKIN’ NUTS? YOU PAID $556 AND NOT ONE FREAKIN’ OLIVE?  DID YOU BOTHER TO ACTUALLY LOOK INSIDE THE JAR? THERE ARE NO OLIVES! NO OLIVES! I REPEAT, YOU GOT NO OLIVES. WHO IS THE MORON WHO PAID $556 FOR AN EMPTY JAR AND DIDN’T GET A SINGLE OLIVE?

THIS IS AN OUTRAGE! THIS IS MALFESCENCE! MALFESCENCE I TELL YOU. I DECLARE SHENNANIGANS!

It turns out the jar is a Greek, antique, ornamental, piece selected for the master bedroom by a hoity-toity interior designer hired for the restoration project.  The designer defended this choice in the press by saying:

“This is a decorative piece, something nice to have in the corner of a room.”  I’ll tell you what is something also nice to have: A JOB! And 161 people now don’t have one!  Poor Phil is now explaining to his wife why his job got replaced by an olive jar!

“It’s like a plant” There’s an idea for you, buy an actual living thing. Probably could get one for 50 bucks.

“It cost less than the original plan”.  Well thank you for being economical and budget conscience.  I know you were tempted to go for that larger $1250 jar, but you didn’t. Nice job on that one!

“It is used to fill a spot in the corner of the room.”  Thank heavens that spot is now occupied. If that space had been left vacant, a migrant family may have found it and set up camp.  It is never a good thing to have strangers living it your bedroom. This would have been embarrassing to the university, not to mention a disruption to the marital-type relations of the president.

There were other extravagant expenses on the list also. Including a $3,172 curved TV, $1000 counter stools, $1,800 mirror and $838 make-up chair.  All these are big wastes of money, except possibly the make–up chair.  Perhaps if you are butt-ugly you might need to apply make-up in a chair with magical powers made of wood from the Peruvian Rainforest in order to transform your appearance.

The house also reportedly now has a remote-control shower.  I have no idea why you would need this.  Maybe if the shower area is large. And maybe you couldn’t reach the handles, because there was someone in there with you and perhaps your hands weren’t free. Oh my! OH MYYYYYYYYYYYYYY! Okay, forget I even said anything about this one.

This is like one of those reality home remodeling shows except in this one the couple has no budget so they spend money like wild until they collapse on the couch, the imported, hand-crafted, designer, couch. It should be called: Say Yes To Excess

So workers get canned, jars get blamed, and I can’t contain myself.  Next time, please check to see if the jar you are buying actually contains any olives, you idiots!
Posted by Don Ake at 4:43 PM