I Love Shania Twain – And Her Music’s Okay, I Guess (The Summer of County Music - Part 1)

Got in my car, turned on the radio, and ---- heard something very disturbing blasting through my Dolby, it was, it was …. country music.  This was odd since I have my radio pre-sets carefully coordinated and none, none of the six buttons, are programmed for country.

It seemed that one of my favorite stations had changed its format from 60’s and 70’s classics, to modern country.  Of course any sudden change is extremely irritating to a middle-age guy.  This totally fizzed me off and ruined my whole day. My classic station was so dear to me that it occupied my second pre-set button, a very esteemed position, indeed.

I loved my classic station because its music made me feel young again.  Of course this causes some problems.  This station played a healthy dose of The Stones. Instinctively, I hit the gas whenever The Stones come on.  It is literally impossible for me to maintain the speed limit. This is particularly troubling when the Stones come on in a school zone.

“Get the hell out of road kiddies. Here comes a child of the 70’s and Jumpin’ Jack Flash got his foot on the gas, gas, gas ….”

Now most sane people would have just found a new station to program in the #2 button, or at least pushed another button, but not a stubborn middle-aged guy.  I let the country music play, just to make me even more miserable. Now I don’t hate country music, but I don’t have the “country music gene”.  It somehow skipped a generation.  My dad was a huge country music fan, as is one of my daughters.  And love of NASCAR is also bundled in that very gene.  If you give me the choice between watching a NASCAR race and a curling match, I will ask you which one will be over first, however my daughter, as my dad was, is a big fan.

But I learned something unexpected by listening to these country tunes.  It used to be county music was ridiculed because the lyrics were stupid and predictable, but my, my, has this ever changed.  I found that the lyrics were usually well composed, covering a wide scope of human situations and emotions.

This is in stark contrast to today’s pop music, dominated by chicky-babes with heaving breasts, wailing about overcoming tremendous obstacles.  Of course you can’t help but think they used their boobs in some way to achieve these mighty victories.  This means males and flat-chested women can’t relate to these songs.  I mean I’ve never been able to use my man-boobs to achieve any triumphs.

And compared to rap lyrics, which I can’t even listen to anymore, the country lyrics are a doctorate level thesis.  If there were a device that filtered out all rap music from my radio, I would hip hop down to the store and buy one today.

My second encounter with country music this summer involved being interviewed live on a country music radio station for my book, Just Make Me A Sammich. The host read an excerpt from the book mentioning Shania Twain.  He then assumed I was a huge country music fan and starting asking me questions, not about the book, but about my love of country music – and remember, this was live, very live.

Of course one can be a devout Shania Twain fan without even listening to her music.  For example, I really like her, uh, ah, well ah, you know.  And her uh, oh, eee, ah, well, that is outstanding also.  He totally caught me off guard by 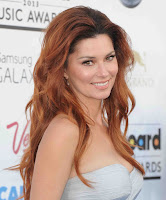 asking what other county singers I enjoy.  I said while country is not my favorite music, I do have some Kenny Chesney, Dixie Chicks and  early Eagles on my mp3.  If I could have thought faster, I would have included Rascal Flatts, Keith Urban and Buck Owens.

Buck Owens?  Yes, he’s on there because he was my dad’s favorite and your father influences you in ways that you can’t begin to understand.  I was even sad the day Buck Owens died, because I knew my dad would have been sad. Strange indeed.

My third summer encounter with country music involved the big Tim McGraw concert that was part of the Football Hall of Fame induction weekend in Canton, Ohio.  I had purchased a very, did I say very, expensive ticket so my country music lovin’ daughter could attend.  My daughter warned me not to buy the ticket, way back in February, because she works Friday nights and she couldn’t guarantee she would be able to go.  Hogwash, I said.  They will let you off work for Tim McGraw, I mean it’s freakin’ TIM McGRAW!

But no, due to some unique circumstances my daughter HAD to work that night.  Which means I attended the concert instead.  Well, what did you expect me to do?  It was a very expensive ticket.  So I found myself in the utterly bizarre world of a major country music concert.  You’re thinking “Wow, that sure sounds like an Ake’s Pains blog post to me!” And you are correct – next post it is!

Well, I don’t know how long it took me to realize that my 70’s classics station had not changed formats, but I had programmed the wrong station into button #2 after my car had some electrical work.  I was so fizzed off at the radio station, but it turns out the culprit was really me!  There was a time I wouldn’t make stupid mistakes such as this.  It would be an extremely rare occurrence, an utterly anomaly. Now days these incidences are known merely as “Tuesday”.

Please check out my new humor book - Just Make Me A Sammich http://donake.net/just-make-me-a-sammich-book