By far the most difficult task in my becoming a humor writer was learning how to write well. The humor part just comes naturally.  I may not have popped out of the womb holding a quill, but I may have had a smile on my face.  Laughter is firmly rooted in my DNA.

My father loved to laugh at the odd circumstances and peculiarities in life.  While most veterans tell war stories involving blood-and-guts, dad’s tales were about spiking the sergeant’s canteen with castor oil and then locking the latrine.  For the longest time, I thought “Hogan’s Heroes” was a documentary.  His sense of humor was bizarre and sometimes he even made jokes about inappropriate things. I’m sure glad I didn’t inherit that trait.

My mother’s family had a devilish ornery streak.  My grandfather loved to play tricks on his grandchildren and would always end up having more fun than the kids.  One of my enduring childhood memories is when my grandfather convinced me that a relative actually lived in the basement of the old family farmhouse we were visiting.  One late night he convinced me to open the trap door to the basement so me and my cousins could meet our kinfolk.  It took all my strength to lift that heavy door. I raised about six inches, when grandfather yelled “Eeeeeeeeeeeeeeeeeeee!” The door slammed shut as we all ran terrified out of the room. My Uncle Bill also had a warped sense of humor.  He was an expert storyteller who could turn a simple trip to the store, into a mesmerizing, hilarious yarn.  I’m just glad I never write about such trivial things.

If you mix all this frivolity together, you get one weird, wacky, humorous guy. I’ve always had a quick wit and can come up with funny quips at a rapid-fire pace. Of course, sometimes these witty sayings come flying out of my mouth too quickly and are deemed inappropriate, offensive or just plain stupid.  However, my humorous comments have never gotten me punched in the face (okay, probably because I’m a big guy), nor have I ever been reprimanded at work by HR. (well, I’ve just been plain lucky here).

I would like to tell you about the moment I discovered how to blend my humor and writing talents together, but I can’t. Someone else did that, and this is how it happened.

I took Journalism as an elective my senior year of high school.  It was unusual to take an English class for an elective, but I enjoyed writing and had an interest in newspapers due to the influence of my parents. Our family subscribed to two daily papers and my parents read them intently every day.  Consequently, I became an avid newspaper reader at an early age.

Journalism was taught by Mrs. Maher, an experienced, skilled instructor in her 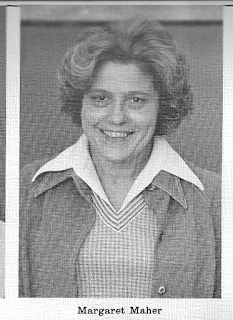 mid-50s.  She was very patient with her students, with a kind and caring heart.  This served her well in teaching this class because it was considered one of the easier English classes, attracting a wide variety of students, including some “stoners”.

Mrs. Maher announced on the first day of class that she needed writers for the school newspaper and this would be a good way to put into practice what you learned in class.  I immediately volunteered.  The time commitment was not excessive. Instead of going to study hall after lunch, I went to Mrs. Maher’s classroom to write and work on the newspaper with other staff members.   I wrote a couple of articles about the sports teams and earned my very first bylines.

But then everything changed ……

It was the day before winter break. There was nothing to work on, so the five of us (I’m sure my friend Shipe was there, whose sense of humor is more warped than mine) put our desks in a circle and engaged in friendly banter as Mrs. Maher stood reading at a lectern by her desk.  I was really on a roll that day, causing raucous laughter with my witty comments.  I thought Mrs. Maher had joined in on the frivolity when she said, “Don, write down some of those jokes and we will print them in the paper.”  Mrs. Maher didn’t joke around much, but when she did it was usually hilarious. Everyone began laughing at this ludicrous comment, but then I noticed I was the only one still laughing. I looked up and my friends all had the same astonished expression.

That’s because they could all see Mrs. Maher but I couldn’t, because she was directly behind me. I whipped around in my seat, still smiling because of her silly remark.  But she was not smiling. This was no joke. She was stone-cold serious.  The smile left my face, replaced by a look of disbelief.

“Yes, that’s your writing assignment over the holidays,” she affirmed.

However, I was not excited over this proposal.  “They are never going to print this,” I thought. No way, no how, never going to happen.  The student editor Diana, was not present to hear about this brand-new feature for “her” paper.  She was as straight-laced as a librarian in a convent. She rarely laughed at my jokes and I knew she would be dead-set against this. There was absolutely no chance of this happening in my mind.

I didn’t make writing this a priority during the break because I thought it was a total waste of effort, because of course, They are never going to print this. Then one evening I realized vacation was ending soon, so I sat down at the typewriter at 12:15 a.m. and belted out some copy.  I labeled it “Giving The Bird” because the newspaper was named “The Cardinal” (our school mascot).  It mattered little that the name was provocative and would never be approved by the school administrators because: They are never going to print this. No way, no how, never.

The first day back at school, I wondered if Diana had been told about my new project. It didn’t take long for this answer. As I entered the newspaper room, Diana glared at me.  I slowly walked over to her, paper in hand. Before I could say a word, she thrust her hand out, fully extending her arm.

“Let’s see it,” she demanded in full librarian scowl.

I handed her my work.

She read it intently, the scowl now turning more into disgust. At no time was there any hint of a smile.

“This looks like something you would write very late at night, right before you go to bed,” she barked.

I shrugged my shoulders with a sheepish look on my face. Busted! However, I liked what I had written, for the same reason I blog today. Because IT WAS FUNNY.  Yet I still felt foolish for even spending my time on this because I was surer than ever that: They are never going to print this.

I would have loved to hear the discussion between Mrs. Maher and Diana about Giving The Bird.  An average teacher transfers knowledge and provides an environment for learning. An extraordinary teacher recognizes potential that a student doesn’t even realize he or she has and then provides the avenue for developing that potential. I’m sure Diana vehemently protested, but if you remember, Mrs. Maher did not say they “might” print my quips, she said “will”.  To my utter astonishment, Giving The Bird made its debut, mostly unedited, in the January edition of The Cardinal.

The column was an instant hit; the students absolutely loved it. The jokes were all about things at the school. (I wish I could give you examples, but those newspaper are buried deep in my attic) It was so popular, that I was the speaker at our Senior Banquet, presenting a final oral version of “Giving The Bird”.

Those 15 words uttered by Mrs. Maher in 1975 had a huge impact on my life. It gave me the confidence to join the Buchetlite staff at the University of Akron as a freshman. I then had the gumption to convince Jane the editor to give me my own weekly humor column, Ake’s Pains, as a sophomore.  It was also a huge hit.

For info on my book: http://www.donake.net/