I Done Got Played! - The Making of a Humor Writer (Part 1)

Skilled writers are made, not born.  Your DNA certainly provides some talent, but you do not exit the womb grasping a quill.  While what you write is a function of imagination, emotion and life experience, how you construct those thoughts is the result of teaching and learning.  Therefore, every one of your writing teachers had some influence on your craft.

I was reminded of this after my last post regarding the closing of Kenmore High School.  The post generated a record number of hits for my blog in the first week.  Many of the readers posted the names of their favorite teachers, a name mentioned often was that of one of my writing instructors, Miss Jameson.

In one of my high school years, I faced a scheduling dilemma.  The school had mistakenly offered the college prep math class and the college prep English class during the same time.  I wanted to take both that term, but I had to choose.  I reasoned the math class was more important, so I took the “mid-level” English Composition class for my other requirement.

There was a consolation in this. English Comp was not nearly as difficult as the class I wanted to take.  It was the mid-level course and I considered myself top-level.  I smelled cake! Ake was going to get some cake.  I anticipated cruising to an easy “A”.

English Composition was taught by Miss Jameson.  She was in her late 50’s, short, stocky, resembled a fire hydrant in an unfashionable dress.  She was everything you would expect from an aging high school English teacher, and less.   She had taught English at Kenmore since the 1950’s. 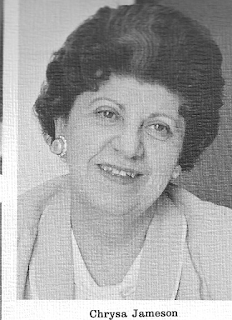 We got our first assignment and I put my normal amount of effort into it.  Which means just enough effort to typically earn a “B”.  That was my basic strategy, I never really put much effort into school work until my junior year of college.  Up until then, I didn’t get by on my good looks, I got by on my good brains.  However, I did not expect to receive a “B” on this paper, I expected an “A”.  There is no grading on the curve in an English class, but I was confident that my “high-level” writing skills would be judged superior in this “mid-level” course.

That morning when Miss Jameson handed back my first assignment, is one of my most vivid high school memories. I looked at the paper and was surprised by the flood of red ink poured out on it.  I raised my eyes to the top of the page to see the unthinkable. My “A” paper had received a grade of “C-“.  What the heck?  What is this? THIS IS AN OUTRAGE!!!!!!!!!!!!!!!!!!!!!!! It would have been amusing to see my expression as I absorbed the reality of the situation.  I grabbed the paper in both hands and just stared at it, I’m sure I began to shake.

“Maybe she’s just a really hard grader on the first assignment”, I reasoned.  I whipped around in my desk and looked at the paper of the girl sitting behind me, incredibly it was marked with a “B”.  “Can I see that?” I asked. And then I rudely snatched it right out of her hand before she even had a chance to answer.  I quickly, but carefully, skimmed her paper.  It was well-written and fully deserving of the “B”.  However, I mean HOWEVER, it was not nearly as good as my paper. Which means I deserved an “A”, but somehow, some way, it got mistakenly marked with a “C-“.

After class, I bolted up front to protest the heinous injustice that had been inflicted on me.  I was prepared to argue arduously to get my grade changed.  However, I was not given the opportunity.  This conversation was bizarre, and certainly not what I expected. Miss Jameson didn’t explain my grade, she didn’t defend the grade and definitely was not going to change the grade. She was a real, she was a real bi….., okay out of respect I will use the word, “biddy”.  She was a tough biddy and this biddy, no budgie.

However, without a valid justification for my grade, I wasn’t ready to give up yet.  I still had one card left to play, the “Mom” card.  As I mentioned in my previous post, my mother had been a secretary at Kenmore High School years before.  She knew Miss Jameson and they had been friends, a fact I had been made well aware of.  Somehow, I was able to persuade my mother to meet with Miss Jameson and question the grade.  I would like to believe she did this out of devoted, motherly love. Most likely she did it to end my persistent whining, but I’ll still go the love thing, yeah.

I was sure my mother would have success, but she returned from their meeting to inform me the grade would stand and that I better improve “because “C”- work is not acceptable”.  At this news, my intense anger turned into intense fear.  I had received a “C-”  on an “A” paper and not been given any explanation why or given much instruction on how to improve.  I was in danger of receiving a “C” or lower, in this “cake” course.

Even worse, I had not been paying much attention in class or to the textbook, because of course, I considered the stuff to be boringly easy and had expected to receive an “A” on the first paper, not a “C-”.  However, after that things changed dramatically.  I studied every one of those red marks on that paper.  I read and reread the textbook assignments. I took copious notes during class.

It was then time for the second writing assignment.  I wrote it, then rewrote it, reviewed it thoroughly, and then wrote it a third time.  I spent more time on this assignment than on my college-prep math homework, more time than I had devoted to any previous school assignment.  I tried to appear cool as Miss Jameson handed back the papers, but my palms were sweating, my heart was racing and I gripped the side of the desk so I wouldn’t quiver.  I nonchalantly took the paper from her hand, but as soon as she turned her back, I quickly flipped it over. It was a “B”.  Big sighs of relief.  I wasn’t even upset that it wasn’t an “A”.  This time I didn’t look at anyone else’s grade.  All I cared about is that it wasn’t another “C-”.

And this is how the class progressed, with me putting strenuous effort into each assignment and receiving a “B” grade in return.  I never received an “A” on any assignment.  I did manage to get “B+’s” on my final two papers.   This enabled me to cancel out that dreaded “C-”  and receive a “B” for the class.  I was still very bitter towards Miss Jameson when the class ended.  I thought Miss Jameson did grade on the curve, except she had a much more difficult curve for me.  I thought she didn’t like me for some reason, which was perplexing considering her relationship with my mother.  Miss Jameson smiled at all the other students, but she did not smile at me.  She was one tough biddy in my book.

For nearly 40 years, I regarded Miss Jameson as my worst high school teacher, by far.  The biddy had unfairly gave me a “C-” on my “A” paper and I had always resented that, but then something changed. Miss Jameson passed away in November 2014 at the age of 97.  The obit was posted on several Facebook Kenmore alumni pages.  I was puzzled by the large number of comments from former students lavishing praise on Miss Jameson.  Some even stated she was their favorite teacher at Kenmore, others wrote she was the best teacher at Kenmore.  Many similar comments were posted on the original obit.  People looooooooved Miss Jameson, they adored her.

“What is wrong with all these people?” I wondered. How could so many people love this stupid biddy? This caused me to reassess what had happened in her classroom so many years ago.  Only this time it wasn’t through the eyes of a naïve high school student, who thought he knew everything about life.  No, now it was carefully inspected by a much, older, wiser man. Someone who was putting together his first book  (Yes, I said “first”, big announcement soon) and beginning to appreciate all the people over the years that contributed to my work.

What you have just read is my new recollection of my experience in Miss Jameson’s class.  At some point in the narrative you smiled, perhaps even laughed out loud, when you realized I had been played. I had been totally played by a fire hydrant in an old flowery dress.  Miss Jameson was a playa and she had played me like a fiddle.

She had read my first composition and had perceived two things.  First, she recognized that I had potential. Maybe enough talent to one day be an author? Second, she saw that potential was in danger of being wasted by a pronounced lack of effort.  Some teachers would have marked my paper with an “A”, but lectured, “Donald, you have a lot of talent, but you need to try harder”.  However, that wouldn’t have had any effect, now would it?  Miss Jameson instead used what she no doubt called the “C- maneuver”. I wasn’t the first student to get this treatment and I suspect I wasn’t the last.  Long before that television commercial, Mrs. Jameson held that fishing pole with the “A” on the hook, taunting “Ooooh look, a B+, you almost got it that time!”

I had no idea that I walked out of Miss Jameson’s class a much better writer than when I walked in.  I realize now that I learned so much more in her class, than I would have in the upper-level English class.

I still don’t know how she was able figure me out by reading just one composition.  The word I use to describe such ability is brilliance. Therefore, I was privileged to study under a brilliant writing teacher.   So, Miss Jameson was not my worst high school teacher, she was one of the best.  She’s still not my favorite however, some bruises can’t be washed away.