I started writing humor my senior year of high school in a monthly column titled “Giving The Bird”. Yes, they actually let me call it that because the mascot at Kenmore High School in Akron, Ohio is the cardinal. Or should I say, was the cardinal, because the school will be closing soon. 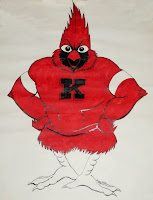 My friend Fred suggested I write a final “Giving The Bird” in this blog as a tribute.  I thought that was a lousy idea, but I have been following Fred’s outrageous ideas since we were young pranksters terrorizing the neighborhood.  If this post turns out to be terrible, you can blame Fred.

Officially, they are not closing the school, but “merging” it with our arch-enemy Garfield High.  However, the new school building will sit on the site of the old Garfield High and they will bus the Kenmore kids in, so they are in effect closing my school. You bastards.

Combining these schools is a horrible idea. It’s like making the Greeks go to school with the Turks, the Hatfields studying with the Mc Coys, the Trumps playing ball with the Clintons. It just ain’t right.  We were taught in grade school that Garfield kids were stupid, smelled bad and had serious cooties.  This had something to do with football games and rivalries or such.

The acrimony was drilled into us so deeply that it was still anathema to date a Garfield girl even after you graduated.  Even if she was cute, it didn’t matter.  You would be ostracized, and besides that, who wants to visit the medical clinic to receive treatment for a bad case of college cooties.  I have only had one friend from Garfield High my entire life.  Interestingly, she was a former Garfield cheerleader who I met through work.  I overlooked her heritage because she had uh, she was eh, - let’s just say she had a lovely personality. Did I mention she was a cheerleader?

Mixing these schools into one is just plain wrong. You bastards.  The school names, mascots (Cardinal and Ram) and colors (red/black and maroon/gold) are not easily combined for the new school.  Potential new names such as Kenfield and Garmore do not easily roll off the tongue. The worst combo would be Garken, which sounds too much like gherkin, where the school would be the home of the “Fighting Pickles”. Love that mascot!

The school is closing since enrollment is now less than a third of when I graduated.  The environment inside the school has become more violent.  The mean kids beat up all scholars and the scholars transferred to the nearby suburban district in droves.  Now there are only a few students left and no one
to beat up.

But don’t feel sorry for the mean kids, the plan is to transfer the Garfield students into the Kenmore building for a year while the new school is being built (the school will have some combo name for one year).  This means the Kenmore hooligans will have a fresh bunch of kids to beat up!  This should work out really well. You stupid bastards.  If the fighting is too intense, there may not be anyone left to attend the brand new Garken High.

The conditions outside the school walls have deteriorated also.  The community is sliding downhill.  The potheads, turned into meth-heads, who turned into opiate addicts. Convenience store parking lots are  littered with used needles. There is a guy running loose who poops on people’s cars during the night (I am not making this up). In my day (used to hate this expression, but for some odd reason I’m using it more every day), you could walk the length of the main drag, The Boulevard, and feel safe at any hour of the day. Now, people get robbed at gunpoint in mid-afternoon.

My connection with Kenmore High School is tighter than most alumni.  My mother was a secretary there in the 1950’s.  It was a job she dearly loved, however she chose to give it up when she became pregnant with her only child (bonus points if you can guess his name).  She often lamented that her old high school had been closed in the early 80's.  I used to consider these comments as just the aimless ramblings of an old person, needlessly yearning for days gone by.  Ironically, I am now the same exact age as my mother was when they closed her school.  Suddenly, those ramblings are not so aimless and I yearn. Yes, I yearn.

Sadly, the first line of the alma mater is “Oh Kenmore High forever”. Well, now that’s a lie. Thanks, you bastards.  Now we need a new song.  Maybe one titled “My School Was Gone”. No, that sounds too close to “My City Was Gone” and that song was written about a totally different place, what city was it? Oh, Oh, Oh ….. Uh, Chrissie Hynde, could you please write a fourth verse, “I went back to Ohio, but my school was gone”.
My gratitude to this school runs so deep.  I received a tremendous education there, of much more value to me than I could ever realize at the time.  What America provides you is opportunity and Kenmore High School gave me the opportunity to thrive, and I took it and ran.  First, at the University of Akron where I was the top Marketing student my senior year (“line up behind me, you suburban kids”) and then in the business world.  I’m not sure how high I stand on this corporate ladder, but be certain, the first rung is painted red and black.  Just as important, as mentioned previously, my humor writing began in a classroom there and ultimately lead to me being an author.

I desperately needed that great education, because as LeBron James said “In Northeast Ohio, nothing is given. Everything is earned. You work for what you have.” You may understand what his words mean with your head, I can feel what his words mean in my heart.  And while LeBron is “Just a kid from Akron”, I will look out at the awesome scene from my hotel room, at a fancy resort where some group has flown me in to speak, and think to myself, “Not bad for a Kenmore kid”.

Now I have a deep, gut-wrenching pain.  The agony you feel at the funeral of an old friend.  A friend with whom you shared many great times, a friendship full of cherished memories.  A friend who departed much too soon.  The administrators who made this decision will claim the school died, I would argue they strangled it to death over many years.  But what these highly-paid, educational poohbahs will never, ever, realize, is when you close this school, you are closing part of me.  And for that, I will give you the bird. Rest in peace Kenmore High, rest in peace.

And three guys I admired it’s true
Senuta, Fortner and coach Wendschuh
They locked the door, the key they threw
The day the Cardinal died

And we were wailing
Bye, bye, school on Akron’s south side
Tried to study, got too bloody
And that spirit has died
Them Buckey boys passed the ball one last time
Saying this’ll be the day that we cry