I gasped as I signed the final check on the morning of April 15th. I don’t have to tell you what the check is for, because it is one of the few days that is so distinctive that we use the actual date to mark the occasion.  It is in effect a national holiday.  We should think of April 15th as America’s birthday, even more so than July 4, because on this day the citizens in the land send the government gifts, pay their literal homage to this great country.  And this year I paid dearly, very dearly.

I was extraordinarily generous this year, by writing four (one fed, one state, two estimates) ginormous checks, involving many zeros.  I know it’s wrong to complain, since the reason I owe so much is because I had a prosperous year.  It’s wrong to complain, so, wrong …. BUT I WROTE BIG F#*%!N& CHECKS! BIG, BIG CHECKS!  BIG ONES!

You may contend that I should have prepared for this better, but preparing for this extraction of funds is as futile as preparing for a root canal, there is still going to be pain, lots of pain.  Planning for this is difficult because my taxes are complicated. Why are they complicated? Well, I’m not telling you and I’m not releasing my tax returns, because people named Donald just don’t have to do that and that’s the truth, pbbtttt.

Regardless of my situation, sending the all this money to the government creates feelings of intense dread.  I sit there numb after sealing the final envelope, as my bank account cries out in anguish: “Stop, make it stop!  Please, I’m begging you!  You’re killing me, you’re killing me …….”.

Some people claim that paying your taxes is your patriotic duty.  In that case, I feel like Paul Revere, Patrick Henry and Nathan Hale all wrapped into one! Oh, I am sorry.  I just compared myself to real patriots, many who fought and died to found this great country and provide these freedoms I enjoy.  And what were they fighting against?  A corrupt and greedy government that taxed them excessively ….. Oh crap, - let’s just forget I ever brought this up. 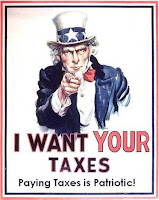 Isn’t it interesting that politicians advocating this patriotic tax paying are always the one’s “making money off of other people’s taxes”.  They are strongly sucking off of the public teat and they won’t budge.  They are addicted to taxes as strongly as junkies addicted to crack. They wail and scream if someone tries to reduce their stash. They are filthy rotten tax whores, that’s what they are.  And they keep sucking that teat, yeah they suck. They really suck.

Maybe it wouldn’t be as painful if so much tax money wasn’t wasted.  If my money was used for something important, maybe I would feel better.  I fantasized that maybe I bought one of those Tomahawk missiles (why do they call it a miss-ile if it’s supposed to hit something?) that were fired off recently?  Yeah, kick a$$!  Yes, boom, boom! But then afterwards there was just a was just a hole in the ground, ehh that doesn’t quite do it. My daughter suggested that maybe my check was so large that I actually paid for the “Mother of All Bombs”, also recently dropped.  Now we are getting closer, except it feels as if they extracted that bomb from my rear orifice.

The taxes are collected by something called the Internal Revenue Service, which has to be one of the worst misnomers of all time.  Your great government has external revenue and we also have internal revenue.  We are so glad that you had such a prosperous year Mr. Ake and that you will be sharing some of your goodies with us! Remember, sharing is caring and we are so glad you care!

You can take the term “THE IRS” and eliminate the space in between and you get “THEIRS”, because it’s theirs, whatever they want, it’s theirs.  A better name for the agency would be the Tax Bastards, because that is truly what they are. It might even help people feel better if they actually wrote the check to the Tax Bastards.  Of course, since my tax return has not been approved yet, please understand that I am using this term in a very affectionate, endearing, kidding-type way. I love you guys, I really do.

I do employ a tax accountant to do my returns.  I have to, or I would begin my 1040 in February and finish up around Thanksgiving.  I have noticed something peculiar when my accountant Tom delivers the much-anticipated verdict concerning my return. He always has the same big goofy grin on his face, no matter if I owe a lot or I am due (a rare) refund.  I think he does this with everybody as a defense mechanism, so people don’t shoot the messenger.  I bet someone, somewhere, at some time, has literally shot their tax accountant after getting the bad news.  I have never wanted to do that, but I will confess I’ve been tempted some years to kick Tom square in nuts. But I don’t, because he smiling so broadly and it’s difficult to do this to someone who seems so happy.  And Tom knows this, oh does he know this.

Regardless, it is not a good idea to ever kick your accountant in the nuts, no matter how much money you may owe.  Because you could get audited by the Tax Bastards (love you guys) and you desperately need a guy like Tom there to fight with you.

I can imagine sitting in the IRS office for the audit, wondering why Tom is so late, when his assistant sashays in:

IRS Guy:  Is this your accountant?

Me: No, she’s Bambi his secretary.

Me: Possibly because I kicked him in the nuts, sir.

IRS Guy: Bambi, how are you prepared to help Mr. Ake settle his dispute?

Moral of the story: Never kick your accountant in the nuts.


Well, I’ve complained more than enough for one post. I need to get back to work, so I can make more money, so I can pay more …… I’m such a patriot, such a patriot.
Posted by Don Ake at 5:21 PM