I’m Scoring Every Night In This Bed

Recently I purchased a Sleep Number Bed.  I know these things are darn expensive, but I am not trying to impress you with this revelation.  I do not spend money on things to flaunt my status, however I can drop some serious coin on things which are important to me.  Because sleep is important and I spend over six hours a night on a mattress, I figured the cost was justifiable.

We should have replaced our old mattress years ago, but when you have two kids in college you tend to delay some purchases. By the time I wrote the final tuition check, we had become accustom to sleeping on our aging mattress.  It was almost like the mattress intentionally conformed to our bodies in order to extend its useful life and avoid the scrap heap.  But one night I felt a spring pushing against my ribs and it was time.

The Sleep Number Bed is basically a high-tech, adjustable air mattress. You can adjust the firmness on each side of the bed to your individual preference.  The company claims the mattress “contours to you for proper spinal alignment” and most restful sleep.

Now I really enjoy the bed and I am sleeping better, especially with no springs poking my ribs.  However, the most unique aspect of the Sleep Number mattress is the SleepIQ ® app (I am not making this up, see photos).  The app tracks and rates how well you sleep each night.  It records how long you sleep, how long it took you to fall asleep and when you are restless.  It also tracks the number and duration of your bathroom trips.  And it does this individually for each side of the bed.

This app is truly incredible.  It even measures your heart rate and breathing rate while you are in the bed.  Using all these metrics, it calculates a SleepIQ® score for you each night.  The app even gives you advice on how to improve your score, for example:

Research suggests eating a healthy diet that includes a variety of foods can lead to more normal sleep patterns affecting your SleepIQ® score. 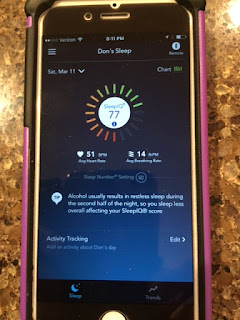 Welllll-doggies!  We don’t just have a bed – we got ourselves a “smart” bed.  I thought the Sleep Number Bed with this app was the greatest thing I had ever seen, until of course, my wild mind realized something extremely disturbing.

So, it would be possible to develop an app (one probably exists) to measure all of this and provide you a “score” for each “session”  I would call it ScrewIQ and the score provided would be an F-number. If your F-numbers aren’t high enough, the app could send you tips to improve your performance. For example:

Women respond well to non-sexual touch. Try giving her a backrub beforehand to improve your F-score.

The implications of this are troubling, however.  You and your partner would be generating more metrics than pro baseball players.  There would be more data on you than Masters and Johnson ever had.  There would be increased pressure on the guy to perform, knowing each time it was being monitored and scored.  Heck, it would be as if some chick in a lab coat was standing in your bedroom with a stopwatch. Wait, no, of course not a stopwatch. Maybe a shot clock, yes, in this case, a literal shot clock. Wait no, no, not a 30-second shot clock.  A timer, with a full 60 minutes on it. Yes, that would cover it, well, most days at least.

If this app became popular, it could change discussions about “bedroom activity” forever.  When women get together to talk about their guys, they would have actual proof of their complaints:

Woman #2: That’s dreadful. Maybe you should try your landscaper.

Likewise, guys would not be able to brag so much if they couldn’t produce any proof.  It’s Monday evening in the health club locker room and the muscled neanderthals are bragging about their weekend conquests. Proudly, the pencil-necked accountant whips out his phone and sticks it in their faces:

“Hit an 87 F-score Saturday night. As you can see by the chart, I rang the bell three times, fellas”.

And like any app, it would have multiple uses.  You are sitting in a business meeting, when suddenly an alarm blasts out from your coworker Roger’s phone:

Roger: My bed alarm just went off.  My wife is doing the pool guy again.  Wait, what day is it?

You: You have a landscaper?

Roger: Yes, I have some wild bushes that need attention.
You: Indeed, you do.

Roger: Sorry, they just blew past an 82 F-score. I have to get home right now!

Even more frightening, this data is transmitted over the Internet, which means it is vulnerable to foreign hackers, who could monitor your love life in real time.

And your data could be sold to companies selling all sorts of aids, pills, devices and apparel.  I am concerned about this potential loss of privacy, very concerned.

Now I know what you are thinking. Don is just being his crazy, imaginative goofy, self.  He is just imagining weird things that could never, ever happen.  But noooooooooooooooo!  You are wrong!

I do know my friend Carol (I have several friends named Carol and I don’t want the other Carols to be embarrassed, so we will refer to her as THAT Carol) was not a customer of this company.  If they had been tracking her activity, she would have received an award for “Customer of The Year” (prize includes a year’s supply of batteries).

Just knowing big brother, foreign hackers, and possibly everyone in the world could be tracking my bedroom activity has created so much performance anxiety that uh, err, eh. Let’s just say the missus and I have had to adapt to this most unfortunate situation.  On a related note, we will soon need to buy a new couch.  However, I can assure you, it will not be a “smart” couch.