My Devices Are Now Managing Me

Sometime around 2003 I traded in my portable CD player for something called an MP3 unit to listen to music while jogging.  I felt some remorse at this change because it was a high-end CD player with cool anti-skip and water-resistant features.  But it was bulky and I wore this ridiculous contraption called a “tune-belt” across my chest to hold the player when I ran.  I’m sure it looked like I was wearing a sports bra to passing motorists, but it did provide the secondary benefit of stabilizing my man-boobs when jogging over rough terrain.

I did like my new MP3 unit.  I was glad I waited until the “3” came out, which I assumed was an improvement over the MP1 and the MP2.  I was successful in magically “ripping” my CDs into a digital file.  I must be very good at this since I can still rip CDs without even damaging them at all!  The MP3 player was easy to carry, had superior sound quality, and stored all my music in one place.
Although I did not realize it at the time, I now had my first “device”.

In 2007, I got my first personal cell phone.  Up to this point the family had shared pre-paid phones.  I really didn’t think I needed my own phone, but we signed up for a family plan and I had my very own mobile phone number.  At first, I only used the phone to place an occasional call and no one but family had my number.

But then in 2008, my mother fell seriously ill and I had to give the hospital my cell number so I could be reached anytime.  I took my phone to work and placed in right next to my business phone so I could answer it quickly if necessary.  That morning I needed to go talk to a co-worker on the far side of the building.  I became anxious because I was concerned the hospital might call my cell phone (sitting there on my desk) while I was gone.  I actually sat there pondering this troubling situation before coming up with a solution.  Yes, they call it a mobile phone for a reason and being a middle-age person in the digital age has its challenges.

In 2010, I bought a Kindle.  It is my favorite device and is so wonderful I will never read a physical book ever again if I can help it.  Strangely, some of my writer friends don’t want one because they enjoy holding, feeling and smelling books.  This sounds a bit too kinky for me, could it be “50 pages of Grey?”.
I felt so technically advanced when my millennial co-worker Tim found out I owned a Kindle (he didn’t) and asked me a bunch of questions about it!  I even brought it to work the next the next day for “show and tell”.

I got a laptop computer in 2011 so I could type my blog posts while I watched television.

I was issued an i-Pad for work in 2013.  I had to learn “Apple-stuff” and I took my first selfie!  Beside work-related functions, I use it to download the daily newspaper if the delivery guy is late.

I bought my first fitness band in 2014 because apparently it is important to know the number of steps you take every day. For the first 20,000 or so days of my life I was oblivious, totally oblivious to my step count. But now I am obsessed by it. So much so that I will saunter outside at night in my pajamas just to make my “goal” for the day.

Of course, there have been upgrades and replacements over the years. Most notably the addition of the iPhone, the iPhone 6, (now the 7) in 2015 and the Apple Watch a couple months ago.  Now I am the proud owner of six devices, but maybe the devices own me? It is vitally important to manage all these devices on a daily basis. I have to keep them updated, upgraded, accessible and most importantly, charged so they don’t “die”.  It is a modern tragedy when we need one of our devices and it won’t work because the battery is drained.

Keeping them all charged is most challenging. You must monitor the battery icon and then find the right charger for the device.  Some bass-turd thought it would be a great idea to make each charger different. So I throw all the chargers in a drawer and try to remember which one I need.  Unfortunately, when I replace a device I don’t throw away the old charger.   After a while I forget what device the charger belongs to.  Then I can’t throw it out because I might need it to charge something, even though I have thrown away the device it belongs to a long time ago. Over time the number of obsolete chargers grows and grows. 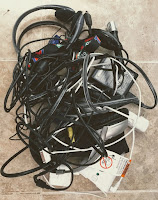 So, these old chargers go in the drawer with the cables from my last five televisions and radios and cassette players and head phones. I bet I still have the one for my CD player!  But they do not just lay there peacefully.  Within that drawer all these cables engage in an orgy of Roman proportions.  The cords become spectacularly tightly intertwined into one large ball.  This is my best explanation for this phenomenon since it would take days for me to purposely entangle the cables this much and yet it happens naturally in that drawer. It gives a whole new meaning to the term hot cable sex.  Here is what my cable ball looks like.

Boss: Ake, what do you think about all this?

Now if you are away from home and need a charge, it can cause some interesting situations.  When you need juice, it’s the most important thing that moment.  Every day, in a coffeehouse or airport somewhere, the same conversation takes place.

Guy: Can I plug my hub into your port, baby?

Girl: Why are you asking?

Guy: Just need some of your sweet juice, girl. I know you have what I need.

Guy: I’m clean. I use protection. My anti-virus software is up to date.

Girl: I guess you can stick it in.  Will you text me tomorrow?

Guy: Sure, if I have enough battery life. But I could be plugged into another girl’s port by that time.

And I do worry about how this device obsession interferes with human interaction as people interact more with their devices than other humans.  This may be why millennials are not getting married. You can’t form a relationship unless you actually talk. “Dude, did you see the way that beautiful woman is looking at you?”  Of course you didn’t, because you are staring at your phone. You poor pathetic putz, you. It used to be men search earnestly for a good wifey. Now they just settle for finding good wi-fi.

Who ever thought that “managing devices” would be part of your daily routine?  You know it’s bad when you try to send someone an email from your MP3.  And if you get “locked out” of your device, it causes you to panic until you get back in. I take solace in knowing that I am not the only one overrun by my many devices.  A speaker at a recent seminar claimed that there are now over five billion devices, more than the population of the earth.  If you are worried about the machines taking over, they already outnumber us.

I know you techno-masters are laughing at me right now for not using my iPhone for multiple functions which would eliminate some devices. But that would be too much work learning how to move all those files around.  I know that sounds stupid, but that’s the way an older brain functions.


At one point I had no devices and was in control of my life and my time. But over the years my devices grew in number and importance, and now to a certain extent control me. So now you could say ---- I am left to my own devices.
Posted by Don Ake at 8:25 AM