Transforming Into The Perfect Gentleman

I’ve reached the point in my life where I don’t need to compete with people and I can put the needs of others in front of my own.  I can be more charming, gracious, courteous, polite, well-mannered and chivalrous.  I strive to distinguish myself by carefully listening to what others say and then reply in a wise, well-spoken manner.  Yes, my personal goal in life right now is to become a “gentleman”.

Of course, this is how I should have behaved my entire life, but that didn’t always happen.  Okay, that didn’t happen enough. Alright, there were times it didn’t happen at all.  But now I am older, and wiser, with a much-improved perspective on life.

The peculiar thing is that most women expect men to act like gentlemen and are attracted to those who do.  But few men exhibit these traits. We don’t do this, because we are men, and we have a male brain, we have testosterone, and man parts.  Add that all together and we seldom resemble gentlemen. Sadly, from what woman tell me and what I see on social media, gentlemanly behavior is decreasing.   The older generations have forgotten how to be chivalrous and I sense that Millennial guys don’t have a clue on how to treat women.

For example, a few months ago, I attending a reception at a fancy country club (Yes, they invited me and I didn’t crash it for the free appetizers). I waited and held the door for a gorgeous young woman. She was so surprised by this gesture, she actually blushed.  Hey, when a guy my age can make a damsel blush, in a good way, it’s a great day.  Likewise, when I was polite on a recent flight, the foxy flight attendant cooed, “such nice manners”.  So Millennial guys, listen up!  If you want to differentiate yourself from the pack, work on your manners!

I believe a major reason there are less gentlemen, and especially younger gentlemen, is the attitude of some “ultra-liberated” chicks.  These women feel the need to criticize men who hold doors open for them or perform other polite gestures.  Being criticized by a woman, and especially a beautiful woman, in public is crushing to the male ego, particularly the young-male ego.  But let me say this to the younger guys: If a woman berates you when you are doing something good, what do you think will happen when you do something bad?  You don’t want this type of woman, so why do you even care what she says.  Better to let her go become some other poor guys problem, regardless of how she looks.  And at my age, I am done with apologizing when I do the right thing and someone else has a problem with it. D-O-N-E - done.  If I encounter one of those ultra-libs, I just smile and say “You’re welcome” and if that fizzes them off more, uh, good.

So, I am making significant progress on becoming a perfect gentleman, but there are forces, nefarious forces, working against me.  This struggle is going to be much more arduous than I ever imagined when you consider this ……

Recently I joined a group of people playing euchre on Monday nights.  My first night there I was quiet and reserved (I’m serious) by design because as you know, Don Ake is an acquired taste and most people can’t handle the “full Donnie” right away.

Near the end of the evening, there was important hand in which Linda, a sweet, quiet, reserved lady, needed to take the final two tricks (the fourth and fifth) to win the game.  The fourth trick started with Linda playing third and me last. When it was Linda’s turn, she had a difficult decision about which card to play. She looked at the cards on the table, then looked at her cards, then more thinking, more hesitation.  Well, I knew by her indecision that she could not beat both of the cards I was holding. She was not winning the game. But she was taking way too long to decide. Finally, she looked at me for an indication (a tell, in poker terms) on what card I was going to play next. Without changing expression, or looking directly at her, I discretely lifted up my hand on the table and revealed my cards to only her.

“YOU @SS!” she shouted as she threw her cards on the table.

The players at our table were stunned.  Play even stopped at the other tables, everyone starring in our direction.  Andy, the group leader, rushed over to find out what despicable thing the “new guy” had done to elicit such a bad reaction from this pleasant woman.  But when he learned I was innocent, he still had a problem; a first-time player had just been publicly insulted.

Andy spun over to me with a worried expression. “You okay?” he inquired.

“I’m fine.  It’s nothing I haven’t heard before. However, I usually have to say something to get that type of response.  Maybe she’s just very perceptive,” I reasoned.

He looks at me incredulously, “You’re not upset?”

Andy grinned, and we have been friends ever since. Even Linda likes me, well tolerates me, now.  My nickname in the euchre group is now is “@ss”

I thought that was just a fluke, but the following week I was at a party, talking to my friend Lori. I was relating a recent conversation I had with a colleague. “You are such as @ss”! she exclaimed.

Then I realized my wife had recently used the term several times when she had been displeased by my behavior on our recent vacation.  When you’re in your 20s and women refer to you as an @ss, it’s a good thing. When you are in your 50s, not so much.

This was not a fluke, but a trend!  I couldn’t accept this characterization so I looked up the definition of @ss to see if my accusers were correct.  Well, according to the slang dictionaries an @ss is “a foolish or stupid person”. I knew this didn’t fit.  These women were not implying I was a dolt.   Definitions do evolve and even the Internet is slow to keep up sometimes, so I kept looking.

Then I saw the term “pompous @ss”.  Could this expression be changing in that people leave out the pompous part and just say @ss?  I was confident that in no way I am at all pompous, but I googled the definitions just to be sure.
The search returned: self-important, imperious, overbearing, domineering, magisterial, pontifical, sententious, grandiose, affected, pretentious, puffed up, arrogant, vain, haughty, proud, conceited, egotistic, supercilious, condescending, patronizing, portentous, turgid, vainglorious.

Come on guys, it’s just one word. If you take 23 other words to define one word, you are obviously trying too hard and you don’t know what you are doing.  I’m a busy, important person and I don’t have time for your cute, little word games.

But I am relieved that after quickly perusing this list that I am definitely not pompous.

Pontifical? – I’m not even Catholic.

Sententious? Well maybe, but I’m an author so I have to use lots of sentences.

Turgid? Absolutely not! I use 24-hour deodorant daily and my Mary Kay cologne.

Egotistical? Come on, I’m better than that.

The sentence example used was:  "a pompous @ss who pretends he knows everything".  Of course, this doesn’t pertain to me, because I don’t need to pretend now, do I?

To be absolutely certain that I have no pompousness whatsoever, I made a list of these words and asked my wife if any of them remotely described me.  I read them to her one at a time. On the first two she just looked at me bug-eyed. After the third word, she started laughing hysterically, face red, gasping for air.  I decided to stop there for strictly health reasons.

I then read the list to my co-worker Ron, a pleasant guy who never says anything bad about anybody.  This time I started at the other end of the list.   It was weird.  Ron was silent until I got to the fourth word and then he claimed he had forgotten to finish a critical report and had to go. And strangely enough he had told me at the beginning of the call that he had plenty of time to talk!

I must conclude I have reached the age where I don’t care so much about what others think of me.  While this is liberating and has positive aspects, it also enables some of my irritating qualities to leak out.  Maybe I’m not as careful in hiding these deficiencies, or it could be I am now less skilled at it. At some point in life you accept who you are and concede that you are not going to change.  Call it the Popeye Principle: “I yam what I yam and dats what I yam!”. 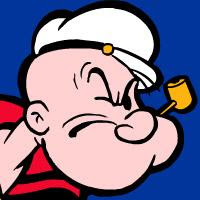 So as I strive to become the perfect gentleman, I am also naturally transforming into a greater @ss.  As I exude more charm and graciousness, I also show more arrogance.  I guess trying to figure out who you really are never ceases, it literally takes a lifetime.
Posted by Don Ake at 5:17 PM