The Story of the Christmas Goose – A Touching Tale

Disclaimer: This is a true story and I decided a year ago it would be my next Christmas blog.  It should not in any way be seen as a social commentary about more serious issues currently in the news.  However, if you are offended, please do not feel obligated to buy me a Christmas present this year, and we will call it “even”.

Christmas is coming
The goose is getting fat

It’s that special time of year again. Gather ‘round, children. And this year, I do mean all you adult-children (better send the youngin’s into the other room when you read this one). Your Uncle Don has another heartwarming Christmas tale from days of yore, that will make the season bright.  It’s a touching, a very touching, story indeed.

Some years ago, when your Uncle Don was younger and thinner, he got himself an invitation to a combination surprise birthday/Christmas party for his coworker John.  What could be better than that, children? Two parties in one. A chance to celebrate John’s birthday along with the Baby Jesus’ at the same time.

And this was going to be a big shindig, children, as a group of John’s coworkers were invited, as well as friends from his neighborhood. Now John lived many miles north of the office, so this party would be a coming together of the prosperous yuppies of the south and the well-to-do preppies of the north.

Uncle Don and his wife made the hour-long trek over the interstate and through the highway to John’s house on a cold Saturday night.  The scene was so Christmassy, children, with the snow on the ground reflecting the festive lights on the house. A large picture window was lit up and decorated with a beautiful garland.

There were over 40 people in attendance, fairly evenly split between work folk and neighbors.  We all gathered together in the living room to surprise John, sing “Happy Birthday”, and shower him with gifts and well-wishes.  Your Uncle Don even cracked a couple funny jokes, as he is known to do.  The party had gotten off to a wonderful start, children, just a wonderful start.

Then something disturbing happened, children.  After the birthday portion of the party ended. People filled their plates with goodies and broke off into numerous groups to share the joyfulness of the seaon.  But there was segregation. And you know segregation is a bad, bad thing, especially at Christmastime. The northern yuppies were in their groups and the southern yuppies were clustered in theirs.  There was lots of Kris-Kring-a-ling, but no intermingling, going on, children.

Then a mericle happened children, another one of Uncle Don’s Christmas mericles. Uncle Don and his wife were in a group of people enjoying the Christmas merriment, when Uncle Don looked down at his plate and saw it was empty!  Fortunately, Uncle Don was standing in the kitchen and there were plenty of free appetizers nearby, so he excused himself from the conversation and went to reload.

Uncle Don had almost reached the food, when Chad, one of the neighbors (the northerners), made a reference to a joke Uncle Don had told earlier and motioned for him to join their conversation!  The south would now be socializing with the north. It was a great Christmas moment, children, not unlike something you would see in a Hallmark special.

Chad was over in a far corner of the kitchen, near the sink. To Chad’s left was his wife Marla and to his right was another neighbor, Cindy, who was short, thin and reasonably attractive.  Uncle Don greeted everyone and we began a pleasant holiday conversation. We was coming together children, we was coming together.

Chad and Uncle Don were doing all the laughing and talking, the ladies were just listening. That is why Uncle Don didn’t notice Cindy moving closer to his left side. And then while Chad was talking, Cindy slyly reached behind Uncle Don and squeezed his left buttock. Oh my, children! I Uncle Don had received a big Christmas goose, but it wasn’t cooked and sitting on the dinner table. A 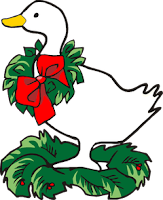 holiday goose was on the loose!

Your Uncle Don thought maybe he had just imagined the goose or, perhaps it was a mistake. He looked down at Cindy and was greeted with a wry, saucy smile.  Although she had a drink in her left hand, her eyes were crystal clear.  No, there definitely was a gooser in the kitchen.

At that moment it was important for Uncle Don to respond quickly and calmly to this wild goose or the party and even Christmas itself was in jeopardy.  Uncle Don did not smile back at her, even politely. Any hint of encouragement and she may have started dry-humping his leg like a horny Chihuahua right there in front of everyone. Uncle Don didn’t know if he was dealing with a Christmas nymph or a Christmas nympho. But he also didn’t want to appear shocked or repulsed.  If that was the response Cindy desired, the goose could turn into a gaggle.

Instead, Uncle Don gave her his best “James Bond” stare. A confident expression, showing little emotion, as if this was no big deal because his   buns got squeezed all the time. Most importantly, Uncle Don needed to throw her off track and think about her next move because there was another potential problem.

Uncle Don’s wife was standing only about 15 feet away, directly behind him.  He slowly and cautiously looked over his left shoulder.  His wife was facing the opposite direction so she was oblivious to the goose.  Everything in that group of people looked fine. It appeared no one had seen it or alerted her by saying: “That cute chick just grabbed Don’s @$$, you better get over there.” All was still calm, all was still bright.

This was most fortunate. If Uncle Don’s wife would had caught the goose, there could have been a bah-humbug hubbub. His wife often moved around 50-pound bags of material on her job.  It would not have been difficult for her to hoist up that little chicky-mama, carry her to the front room, and toss her right through that big ‘ol picture window.
Now that would have been a spectacular Christmas lighting display, children. With glass shattering everywhere, shimmering in the many colors of the holiday lights. Poor Cindy would have landed face-down in the yard creating an awesome snow angel, well maybe it would have been more like snow fallen-angel.

It would have been a spectacular end to this Christmas party, children, and people would have talked about it for years. And yeah, it would have kinda “hot”. But Uncle Don did not want anything like that to happen to embarrass his friend John and ruin his party. Besides, that picture window looked very expensive and Uncle Don’s December budget was already tighter than his backside, being Christmas and all.  Because of this disastrous possibility, Uncle Don needed to ensure there were no more geese in that kitchen.

Like a Civil War General who was under attack, Uncle Don moved swiftly to guard his flanks, specifically his left flank, which had been exposed and gotten pinched. He moved to his right and turned slightly so his buns were now temporarily out of reach.  He had successfully employed his rear guard.  The conversation continued, but it is extremely difficult to concentrate when your butt can get grabbed at any moment.

Uncle Don waited for a break, said his goodbyes (got the same sassy look from Cindy), loaded up his plate, and returned to his prior group chit-chat. No one was the wiser. However, like a good General, Uncle Don kept his rear-guard employed, backside always pointed at the wall, for the rest of the evening.  And he made sure he knew where the wild gooser was at all times.

Now Uncle Don knows what some of you children are thinkin’ and you are being naughty. Yes, you are having naughty, naughty thoughts. And let me remind you that Santa does reward naughty children.  You are thinkin’ that Uncle Don must have been a flirtin’ with that woman to attract that Christmas goose.  I can assure you that there was no flirtin’, none. Because Cindy didn’t say anything. She was the kind of women who talked with her hands, whose actions spoke louder than any words could. Maybe it was just Uncle Don’s magnetic personality that attracted her hand to his cheek, but there was no flirtin’, none.

Monday morning John stopped by Uncle Don’s office and asked if he had a good time at the party.

“It was great”, he said.  But Uncle Don couldn’t hide the big smirk on his face.

He motioned for John to come closer and said quietly, “Your neighbor Cindy pinched my butt”.

John was embarrassed and began to profusely apologize.  Uncle Don assured him everything was fine.  John said she had also goosed one of his neighbors. “I think she was drunk”, he said.  He then asked Uncle Don if he had told his wife.

Sometimes coworkers ask you the dumbest questions ever, children. Just stupid ones.  What was Uncle Don supposed to say? “Hey, you know that short, cute brunette at the party? Well, she grabbed my @$$.”  It was already a long, cold, ride back, why make it any longer or colder. I also have a big picture window at my house and – well, why risk it?

I didn’t challenge John’s assumption about whether Cindy was drunk.  I still thought she knew exactly what she was doing.  A couple years later, John and Uncle Don were reminiscing about that party and he told Uncle Don that Cindy had recently divorced.  That didn’t surprise Uncle Don a bit, children.  A woman with hands that active is sure to feel someone or something that elicits a response.  No doubt she had been reaching around some guy, grabbing his butt cheeks with both hands, while enthusiastically pulling him towards her – if you get my drift, children.  And I so much hope you do, because Uncle Don doesn’t want to have to draw you a picture.

Isn’t that the most touching Christmas story you have ever heard, children?  I know I was touched by it.  Really, really, touched by it. It is literally a touching tale, because she was touching, my tail.

So I would suggest this Christmas, and especially at all work functions and holiday parties, that you keep your hands to yourself and ask permission before taking any actions under that mistletoe.  What happens under the mistletoe, stays under the mistletoe, unless your dorky friend takes a pic and posts it.  Then it goes everywhere.  When it comes to Christmas, children, the goose belongs roasted on the table, and not served on the buns.