Every year there are things that are humorous but don’t merit an entire  blog post. So to clear the deck for 2018 and have some more chuckles in 2017, here are some leftovers!

My fans have been waiting for this a long time, some women have even been demanded it from me.  Some said it would never happen, others claimed it could not be done.  But during my summer vacation this year, I, Don Ake, made my wife a sammich!

I know you are stunned, but it is true.  I figured no one would believe me, so I took a photo of my remarkable creation.  The pic is not to impress anyone, nor make me look super amazing. No, not at all. You know I would never do that. 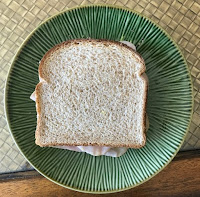 But the photo shown here is proof for all you doubters and haters out there.

My wife was surprised and impressed when she returned from the beach to find her sammich.  She was also pleased that it was edible and that I did not make a mess.  Served with a side of chips, it made for a tasty lunch.  I have notified the Food Channel of my abilities, but no response as of yet.

It’s Just A Sammich – Nothing More

In August, I took a local client to lunch at a place called “Grinders”.  They serve delicious submarine sandwiches, grinder being another, somewhat archaic term, for that type of sandwich.  However, when submitting your expense report to your home office located in another state, it may not be clear what the term “entertained client at Grinders” actually means.

There could be questions such as:

What type of grinding was involved in this so-called entertainment?

Was there any bumping going on along with this grinding?

Did any of the ladies working there remove any clothing as part of this entertainment?

Were there any cash tips involved that may or may not be included on your expense report under “Miscellaneous” expenses?

Now in the interest of providing the ultimate in customer service to my clients, I would have endured a bawdier environment. But this was not the case.  It was just sammiches, excellent sammiches at that.  The waitresses were fully clothed the entire time. And this being an establishment that caters to an older crowd, you would never want them to remove any clothing. In fact, if they tried, I would have tipped them generously to refrain.  I will admit to sticking one of the grinders in my mouth, and that’s all.

The Worst Dinner of the Year

While dining at a local restaurant, my wife ordered the 3-piece chicken dinner.  There are basic expectations here. It will be chicken and there will be three pieces.  My wife was served two pieces of chicken and a rock-hard, baked? – probably under-microwaved, potato.  The waitress successfully delivered the third piece of chicken upon request. However, the baked potato had to be sent back a second time for additional microwaving.  Of course, this blatant incompetency was entirely my fault because I selected the restaurant.  I think the staff could use some additional training.  Question #1 on the final test: How many pieces of chicken are in the 3-piece chicken dinner?

Runner Up: A bar-and-grill where one of my groups meet, serves chicken tenders which have a greenish tint.  The chicken tastes okay, it just looks funny.  I will never order it. Why?

The Biggest Cojones of the Year

In September, a major credit reporting service announced that in May, that would be four months earlier, massive amounts of highly-sensitive, financial data they are allowed to collect on you and 143 million other people, had been hacked.

Now your personal data may or may not have been hacked, since they never sent out a letter informing you for sure.  However, a week after their announcement, this same company was advertising a protection service that stops digital pirates from doing evil things with your stolen data, such as maybe draining all your bank accounts. The ads warn: You are in great danger if these hackers have all your personal financial data.

Of course, this danger is why you should have guarded my data much better than you did.  But by your gross incompetence, you did create 143 million potential new customers for your swell protective services.  I will not be one of them.  This takes cojones, big cojones. And if I ever meet the person responsible for this breech, I will kick him square in the cojones.

Worst Brown Out of the Year

My neighborhood was suffering cable outages and the technician traced the problem to the line extension in my bedroom.  He asked me how much I watched that TV and I explained “I only watch it when I poop”.  So my desire to watch TV when I poop was shorting out, or more like browning-out, the entire neighborhood system.  We decided to solve the problem by using the Internet. So now I am streaming video while I am streaming other things.

Worst Customer Service of the Year

My trash removal provider changed our pickup day from Tuesday to Friday.  I was not happy with this move because it meant my trash would be picked up on the last day of the week.  As someone whose last name begins with the letter “A” I am used to being at the front of the line, not the back.  I expect to be treated with the respect I deserve, even by my trash company.

Everything was fine until one week when the trash in our neighborhood was not picked up on Friday.  I don’t know if they accidentally skipped us, ran out of time for the week, or whatever.  Regardless, they should have picked up the trash as soon as possible, even if that had to incur additional costs.

The good news is the trash was finally, and triumphantly for the neighborhood, picked up on Thursday, only six days late.  And then the garbage truck came back on Friday for the regular pick-up, but strangely there was very little trash to collect.  Customer service of this level takes a special type of stupid and most of the neighbors have switched to a new provider who dutifully picks up our trash every Wednesday without fail.