The Endorsement of the Year

The business networking site LinkedIn lets your connections (equivalent to Facebook friends) endorse you for various business skills.  They even send you an email when someone endorses you.  For example, 51 of my connections have endorsed me for “Marketing Strategy”.  It is odd that I have only 24 endorsements for “Forecasting”, which is the most important skill needed in my job. And it is incredible that only one person has endorsed me for blogging. Can you believe that? Uh, okay, let’s forget I even brought that up.

But imagine my delight when I opened my inbox one morning and saw this:

That’s right losers.  You may be glad to be endorsed by Phil in accounting, but I, Don Ake, have been endorsed by Jesus!  Jesus has endorsed me.  I immediately posted the news on Facebook and had a strong boost of confidence the rest of the day.  And you can be sure I put this on my resume -- the top of my resume.  I mean the rest of the resume is sort of irrelevant if Jesus has endorsed me.  Next time I’m in a job interview, competing with a Harvard MBA, I’ll just say: “Sure, you can pick the guy with the great degree. But I must point out that Jesus has endorsed me, and not him. So you can reject me, as long as you are not worried about fire, brimstone and declining profits – stuff like that”.

For the record, my Mexican colleague, Jesus Morales, believes I am skilled at “Competitive Analysis”.

A Most Difficult Job

I noticed this sign in the parking lot of a local company. 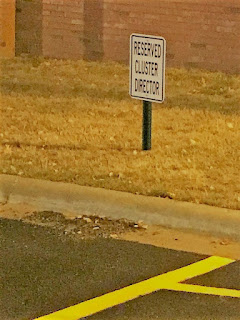 Wow!  This place is so messed up they need a Cluster Director to fix all the cluster-farks they produce.  How would you like to be in charge of fixing all the clusters produced by your co-workers?  It’s the equivalent of being the mop-boy at the supermarket.  “We’ve got a major cluster produced by marketing! Send it to our Cluster Director Ken.”  You can fix it, can’t you Ken?”  The sign may look stupid, but if the poor sap is responsible for fixing everyone else’s clusters, then he sure as heck deserves his own parking spot and a big salary too!

Performer of the Year

My wife and I were taking an after dinner walk when we stopped to listen to a singer, Chad, performing in the open-air (3 sides) bar/café under our hotel. He had good voice, was skilled on the acoustical guitar and covered a wide range of music.  I felt bad when we moved on because there were few people listening in the cafe, being this was the off-season.

When we finished our walk, I was delighted that I could hear Chad clearly from my nearby third-floor balcony as he neared the end of his set.  I could not see into the café, but I could tell by the comments, laughter and applause, there was now a small, older, but enthusiastic audience.   And they were enthusiastic because there were some drinks with dinner followed by some after-dinner drinks.  Oh yeah, they were sloshed. But that was fine because they didn’t have to drive home, they just had to make it back to their rooms without falling in the pool.  And they were really enjoying Chad.

Chad had finished all his staple material, so he opened it up for requests.
“Play thum Rod Stewarttttttt”, one of the ladies blurted out. Now Rod Stewart would not be my first choice in an acoustical setting, but without hesitation Chad broke into one of Stewart’s more obscure ballads.

Chad then asked for the next request.

A guy, who no doubt was chugging a large, strong, tropical concoction, loudly and proudly slurs out, “Plaa da Piano Man by Billy Joellllllllllll”!

Now Piano Man is a great song, by a great pianist, Billy Joel, but IT IS CALLED THE PIANO MAN BECAUSE THE SONG WAS WRITTEN TO BE PLAYED BY A MAN ON A PIANO – and definitely not on an acoustical guitar - you stupid, drunk, moron.

Now I have my hand over my mouth to keep from laughing out loud (I was close enough to be heard), wondering how Chad was going to politely deny his request.

But to my utter surprise, Chad replies, “Just give me a moment to download the lyrics”.

I’m astonished! Chad is going to give it a go.  I think this is a huge mistake and anticipate a train wreck.

But the next thing I hear is:

And then something truly remarkable happened.  Chad delivered an outstanding performance of Piano Man, on the acoustical guitar! Complete with the:

Chad foolishly asked for a final request and one of the drinkers stupidly requested a song he had already played. (Gee, I wonder why that song was stuck in her head).  Chad concluded with a song of his choosing.

The show was over, but the entertainment was heating up as one of the “golden girls” put her cougar moves on young Chad as he was packing up.
She kept repeating:

Yes, she wants his body

And now, she was letting him know.

Chad is darn lucky he didn’t try to play an acoustical version of that one!
I couldn’t see if Chad left alone, but I sense that he did.

Sing us song, you’re the acoustic guy
Sing us a song right here
Well we’re all in a mood for another drink
And they’re serving us plenty of cheer

For several years the “Fight Hunger Bowl” was the college football bowl game played in San Francisco in December.  This year it was replaced by the “Frisco Bowl”, sponsored by DXL.  But DXL is a men’s clothing company that specializes in “double extra-large” attire (I may or may not be a customer).  So it would appear that even though they tried to fight hunger for numerous years, hunger has won.  Pass the chips and dip, please.

I was lounging on the beach when a young couple (late-teens?) appeared about 30 feet in front of me.  The woman said to her boyfriend “I brought this game for us to play. This isn’t the ball that came with it, but it should work.”

This statement caught my attention (but not the skimpy bikini she was wearing, I didn’t notice that at all) because this was a Velcro catch game, but instead of a Velcro ball, she had a solid plastic one.  I was now interested in how this game was literally going to play out.

The woman starts off by tossing the ball to the guy.  He catches the ball by trapping it against the Velcro mitt with his bare hand, realizing that it’s not going to stick.

The guy then tosses the ball back.  The woman enthusiastically swings the mitt at the ball --- and WHACK!  The plastic ball ricochets hard off the mitt and rolls down the beach.

Unbelievably, she repeated this effort two more times, with of course, similar results.  After the third failure, the woman yells out: “IT’S NOT WERRRRRKING!”

You may laugh at this woman’s lack of understanding of Velcro, but how many times in 2017 did you repeatedly try to force reality to match your perceptions instead of adjusting your perceptions to match reality?  When I find myself shouting “IT’S NOT WERRRRRKING!” in 2018, I’m going to think about this woman on the beach and try a new strategy.