A Tribute To Midnight, My Dog: Part One – I Never Wanted A Dog

(Note: These are the most difficult posts I have ever written. I am counting the number of breakdowns during the series. (bd#))

I never wanted a dog.

My dad grew up in the woods of Pennsylvania and always had dogs as pets, including hunting dogs. But I never had a dog growing up.  We lived in the city and my dad believed that dogs needed freedom and it wasn’t good to coop and chain them up. Dogs were happy when they were free to roam the woods of Pennsylvania, but not in the city. So my dad was willing to forgo any enjoyment we would get from a dog because it would cause discomfort to the dog.  My dad was a great man.

But we had cats, lots of cats, for as long as I can remember.  We never went more than six months without having a cat in the house.  So when I formed my own household, we had cats as pets.

And my experience with dogs was contentious. I had been cornered, but not attacked, by two vicious dogs at my friend Chuckie’s house as a young teen.  Then I was attacked and bitten by a large German Shepherd when I was 18.  No, I did not like dogs and never desired to own one.

However, my youngest daughter, a pre-teen, now wanted a “puppy”.  We had moved to a large lot in the suburbs, so my dad’s argument about having enough space was less relevant. And of course, my daughter emphasized this would be “her dog” and she would take total responsibility for it.

I still was strongly against this, but my wife and other daughter were enthusiastically on board.  When you live with three females, you tend to lose a lot of family votes by 3-to-1 counts.

But if I am paying for and putting up with this creature, I was choosing the dog breed. Only of course, I knew nothing about dogs. I could only really identify a few breeds, and most of those (including German Shepherds) were not possibilities.  I asked my friend Brent for advice because he owned dogs. Based on my needs, he recommended a Miniature German Schnauzer.

I had no idea what this apparently tiny, foreign dog was, so I Googled it. And after researching the breed, I instructed my wife to get a Schnauzer.  It would cost $450, which I was not at all happy about.  But a father will pay some ridiculous, enormous costs just to make his daughter happy.

The dog entered our lives on a Friday evening.  My daughter would be returning late from a week at church camp and the dog would be a huge surprise. She was delighted to meet her new pet at 11:45 that night.  But the puppy needed a name. She looked at black dog, she looked at the clock, and christened the pooch “Midnight” (bd1).

I was totally unimpressed with my $450 purchase. I saw just a small fur-ball with two big eyes peering out.  The thing couldn’t even walk, it just sort of scooted across the floor.  When I questioned the cost, my wife replied, “He cost that much because he has papers, in case we ever want to show him.” Papers? He has papers all right. They are scattered all over the place and I now have to watch where I step in my own house.  I don’t want to show him, in fact I don’t even want to see him. 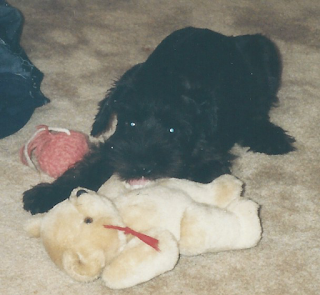 But my daughters enjoyed their new puppy, so maybe it was worth it.  I still totally avoided the “fur-ball with eyes”.

Our relationship (you don’t truly own a dog, you have a relationship) began unexpectedly.  My wife and I were watching television downstairs in the family room, she had Midnight on her lap.

“I have to go upstairs, so you need to watch the dog,” she said.

Watch the dog?  No, I didn’t sign up to watch this or any dog.  But before I could protest, she placed Midnight on the arm of my large chair and left the room.

I looked down at him nervously, thinking “I am very uncomfortable with this. You are not going to do something stupid, are you?”

Midnight rolled his eyes up and looked at me. He looked distressed. Somehow this dog had already sensed I was unhappy with his presence, his look said:

“I am very uncomfortable with this. You are not going to do something stupid, are you?”

For the next 15 minutes, we stared at each other nervously.

I continued to avoid interaction with the dog as much as possible. (bd2) I would carry him up the stairs when he was stuck at the bottom – okay I’m not totally heartless, but that was it.

However, soon I was forced to interact with the dog. Because puppies misbehave and need to be disciplined. And the females in the house were not going to do anything that would harm that puppy. But I was still raising two children, so I understood the concept of discipline.   It would go like this:

Puppy does something bad.

I would then swat the puppy with a rolled-up newspaper.

The females would then turn their wide-eyed, jaw-drop, worried expressions to me, because I had struck their puppy.  To counteract this, I began to carry Midnight to the downstairs hall to administer the punishment.  But the dog learned the routine and when I set him down in the hall, he would lie on his back with his four legs sticking up which said:

It was at this point I realized the dog was very intelligent, and it’s really difficult to administer discipline when you are laughing so hard. So to the dog, I was the “heavy”.

But the relationship was about to take a dramatic turn ……

One day I arrived home from work and opened the door from the garage on the lower level. At the top of the half-flight of stairs was Midnight. He was wildly running and jumping from side to side. His tail was wagging so forcefully his whole back end was shaking. I was reluctant to climb the stairs.

“What’s wrong with the dog?” I shout to my wife who was in the kitchen. She sticks her head around the corner, surveys the room, and replies, “I think he’s glad you're home. He’s happy to see you.”

Happy to see me? That is totally ridiculous. Why would this dog be happy to see me when I purposely ignore him and often swat him with a newspaper?  Is the dog actually that stupid? 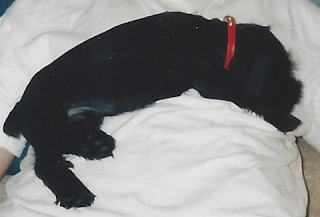 I really had no interest in greeting this animal, but he would not let me enter the room until I did.  This greeting became a daily ritual, which of course, I learned to enjoy.  My wife and kids did not greet me with this much enthusiasm, but Midnight did.

And then the dog introduced me to playtime. My wife had bought some dog toys (including a rope contraption that I labeled “ropey toy” (bd3)) and found a few old tennis balls in the garage. I did enjoy watching my daughters have fun playing with the dog.

One day when I was intently reading the newspaper, I felt something against leg.  I lowered the paper to find Midnight staring at me with a tennis ball in his mouth.  He dropped it at my feet and looked at me as if to say:

Well let’s not, since I’m busy okay, and I went back to reading the paper.  But I was interrupted again as the dog forcefully thunked the ball down a second time. I put my paper down and the dog looks at me all agitated and is like:

Well, I guess I can throw this ball one time. Little harm in that.  Except you can’t throw the ball only one time.  Because he aggressively chases it like a mad dog, then races back to you, drops it at your feet and expects you to throw it again, and again, and again.  You end up sometimes throwing the ball ten times or more until the dog has run himself into exhaustion.

And then a few days later, my newspaper reading is interrupted again when I am presented with “ropey toy” and the dog is like:

Hey, got a new game for you today. Here’s the rope, you take it!

But it’s a trick. You grab the rope but the dog grabs the other end and you begin a vigorous game of tug-of -war.  The dog clamps down on the thing with his powerful jaw and growls. He is having a blast! As soon as you let go, the dog revels in his victory and then slyly offers you the rope again so the game can be repeated.

And thus, the bonding process began and as you can see (bd4) it was the dog who was doing all the work to turn this relationship into something special.

Next: Part Two – The Bonding of Man and Dog