It’s Not Too Late To Get The Flu

I remember reading an article on the flu season beginning in Northeast Ohio. It was expected this year would be “bad”.  It listed the symptoms of the flu: high fevers, body aches, congestion, coughing, and fatigue. It said sufferers were converging on emergency medical facilities and it was expected there would be some deaths.

This all confused me.  A fever? Take some aspirin.  Body aches? How bad could that be?  And why would you go to the emergency room if you already knew you had the flu? Are people that stupid?  And those deaths e are probably just extremely old people and the flu just pushes them over the edge. The article ended by saying “it’s not too late to get a flu shot”.  But I didn’t have to worry about all these terrible things because I had dutifully gotten my flu shot in October, just as I had for the past 24 years.

But Then Something Went Wrong

It started with a cough.  A minor, nuisance, cough upon waking.  I reasoned it was caused by sinus drainage during the night. But the cough persisted throughout the day.  I started running a mild fever that evening.  I sensed I could be getting sick, but the symptoms were rather weak.

The next morning the fever was higher, the cough more persistent and I had a bad headache.  I took some naproxen, naively expecting it to eliminate all my discomfort, like pointing a garden hose at an approaching forest fire.

Then in the afternoon, the body aches arrived.  These were not harmless muscle aches.  It felt like my whole torso had been placed in a vise and I was being crushed.  It hurt to breathe. Coughing resulted in such intense pain that I gasped.  If this had been a torture chamber, I would have quickly confessed to colluding with the Russians. Heck, if they promised to stop this agony, I would have gladly agreed to go collude with the Russians, especially if a hot secret agent named Natasha was involved.

The pain was so intense I did consider going to an emergency facility.  However, this is me, so you would expect there to be complicating factors.  It happened to be 4 p.m. on New Year’s Eve.  All the doctor’s offices were closed so the doctors could prepare for their exquisite New Year’s Eve parties (no doubt involving loads of shrimp). That meant everyone who had the flu today be descending upon the facility at the same time. I reasoned that the medical operation would be staffed by a skeleton crew, because who the heck wants to work on New Year’s Eve?

I imagined the crowd to be so massive that cars would be lined up out on the street. I would probably get care sometime around January 3, unless I died first.  I sensed it would have been a waste of time but my dear friend Cheryl suggested that I should have gone and got some Tamiflu. According to the numerous amateur doctors on Facebook, Tamiflu is either a wonder drug or poison.  You decide.  (I went to high school with Tammy Flew.  I never thought she would be much of anything, but now they have named a drug after her.)

I decide to stay home and take some Ibuprofen for the severe body aches. Fortunately, it works and the body aches never return. So no, I did not collude with the Russians and I did not spend the night in a hot dalliance with Natasha. (Those leaked emails are forgeries, fake news!). 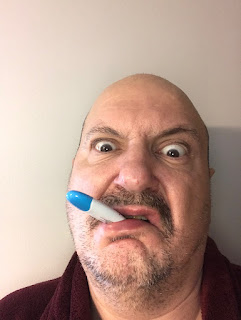 The next morning, the flu hits me with its full sadistic strength. My fever is up to 101.7 degrees.  I stumble downstairs fully expecting to receive pity from my wife.  However, my wife was not in the living room, she had slept in the bottom-floor family room so she would not catch the germ.  But then I heard the cough.  I knew that cough.  It was the same cough I had been experiencing for two days.

I drag myself downstairs and ask “Are you sick?”.  She gives me a menacing glare.  She has a temperature of 101.8, so much for getting any pity.  Now technically, I am much sicker since my normal body temperature is 97.2.  But this is not something you want to argue when you have made your wife this ill.

I know she is furious at me for giving her the flu. I had also infected her with a bad cold germ last year. But she had given me two nasty germs previous to that. So we are now even, right?  Alas, another argument I’m not going to win.

I labeled our house as the “Ake Infirmary” on Facebook and household duties were handled by whoever wasn’t sickest at the moment.  The most challenging being walking the dog in negative 15-degree wind-chills. The statistician in me hoped my high fever would cancel out the freezing temperatures, and in a way, it did.  When the arctic wind freezes your face, you do temporarily forget how lousy you feel.  I remember thinking “I hope the dog appreciates what I am doing for him.”  Then I realize that he’s my dog, and if the situation were reversed he would faithfully do anything to help me. Because of course, that’s what dogs do.

My wife even made our traditional sauerkraut and knockwurst dinner on January 2. (I tell people my wife always presents me with two large, juicy knockers to start off the new year).  She made the food, but I have no idea who she expected to eat it.  If I had eaten this, I’m sure I would have died.  Therefore, my wife prepared this meal either out of her strong love and devotion to me, or she was so furious at me for giving her the flu that she tried to kill me.  Fine line between love and hate.  I don’t really want to know which one it was.

Fortunately, my wife recovered much faster than did. (I took 6 days longer) When I posted on Facebook that my wife was better, but I was still sick, there was a bizarre reaction which will be the subject of my next blog post.

This virus is nasty. It dove into my chest and started ravaging my body like a madman.  It is not the B Phuket virus that I wrote about in 2015, although I B-Phuketed up really badly. I have been twice vaccinated against the B Phuket.

But apparently, I was not protected against the flu I caught because somehow it was not included in this year’s vaccine.  The Center For Disease Control (CDC) never saw this strain coming. This year they whiffed. Whiffed as bad a rookie wailing away over a Corey Kluber sinker. You failed CDC! You failed so very, very, badly.

Now I am a professional forecaster so of course I do understand how difficult these things are to predict. BUT I DON’T CARE BECAUSE SOME DWEEB GUESSED WRONG AND EVEN THOUGH I GOT YOUR STUPID SHOT, I GOT THE #$@&ING FLU!

Hello! You are the Center For Disease Control and you are not controlling this disease.  If you need to identify this strain, I have some excess bodily fluids I can send you, provided I can find some bio-waste bags at my local drugstore.  I will find out which strain I had next year when I’m sure it will be included in the new flu shot. The proverbial barn door being sufficiently shut.

The most ridiculous thing is that medical professionals are still proclaiming: “But it’s not to late to get a flu shot.” Give it up people. just give it up. It may not be too late, but it won’t help you a bit. Z-freakin’-O. And that part about the vaccine offering partial protecting and reducing the symptoms? Not for this strain! Crapola, major crapola.

Ironically, next October, I will dutifully get my flu shot for the 26th consecutive year. Why? Because anything that gives me any chance of avoiding repeating this awful experience, is well worth it. I just hope the stupid nerdlies at the CDC guess better next year.

Email ThisBlogThis!Share to TwitterShare to FacebookShare to Pinterest
Labels: flu, flu shot, get a flu shot, getting the flu, influenza, sick, sick with the flu