One Last Look – Part 3 (A Tribute to Midnight, My Dog)

(Writing this series was so difficult for me.  The “bd” designations count the number of times I had stop for “breakdowns” in the process)

Midnight and I developed a tremendously strong bond over the 16½ years we were together (bd13).  As a first-time dog owner, I was unaware that this bond was even forming.  Midnight just provided fun, companionship and joy on a daily basis. 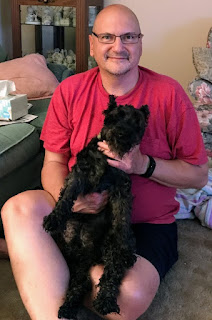 This connection between dog and man is so intense because it is a life-long process.  When humans fall in love, there is that huge emotional jolt at the beginning of the relationship. Eventually the intensity eases to a more stable level.  But the dog/man relationship occurs drip by drip, day by day, and it never stops. And the reason it never stops is that the dog won’t let it.  It is the dog that keeps pursuing you and you naturally keep responding back in the same way.

There were events over the years that solidified the connection between Midnight and me.  When I was unemployed for months during the Great Recession, we spent more time together.  I didn’t realize how much he helped me through that time.  Many days I felt abandoned by the world, but my dog never gave up on me (bd15), although I’m sure he was sad when I returned to work. (Of course, he was the only one to feel this way)

My daughter who was Midnight’s chief caregiver, eventually moved out of the house.  I thought she would take the dog with her but she knew Midnight would be happier being around more people. He missed her, but I was secretly happy that the dog stayed and that he relied more on me now that his favorite person was gone.

After I began working from home in 2013, Midnight and I spent even more time together (detailed in a previous blog post and in my book Just Make Me A Sammich).  My favorite memory is that I would usually take a break around 3 p.m. and we would go play soccer in the backyard.  If I was late, Midnight would come bounding into my office and jump around, informing me it was time to play (bd16).

Quit staring at that stupid screen and get downstairs so we can play ball! You’re working too hard! It’s playtime.

I knew that Midnight and I had bonded, but I was unaware of how powerful this was until the day I realized he was growing old and wouldn’t be around much longer.  Of course, I knew the dog wouldn’t live forever.  I remember one time when we were staring at each other, thinking about how painful it would be to look into his eyes for the last time. (bd17)

However, now realizing this bond was going to break in the near future caused an intensely, dreadful feeling.  This was going to leave a mark.  I certainly never saw this coming. I felt like I had been tricked.  I’d not wanted this dog, but now I’m firmly attached to it. I now see how this will end and it’s going to hurt like hell. (bd18).  I even complained to God about how unfair this was. As if this was more unfair than anything else in life.

I thought Midnight’s physical condition would continue to quickly deteriorate, but it did not.  This was a slow process that took place for almost two years.  His mobility slowed, his hearing declined and he was going blind.  I took some solace in that there would be no painful last look if the dog was unable to see me. (bd19)

There were a few times when he fell ill, that I thought he was finished. I would summon my daughter to return for her final goodbye, but then he would recover.

when I read the paper.  In a way, he was an inspiration.  I should live so enthusiastically in old age, if I make that far.

He held onto life with all he had.  Sometimes he would get tremors and would walk aimlessly around the house until they stopped. When the tremors came in the evening and he was too tired to walk, I would lay him on my chest – and the tremors would soon cease.  It felt so good comforting him in this way. (bd20)

I want to believe Midnight’s was determined to live on because he didn’t want the bond to break, either.  If your dog loves you more than you love your dog, then the bond between you is stronger for your dog also. (bd21). The dog doesn’t want to leave you – this is extreme devotion.

Living with an aged dog is not pleasant. You end up making many concessions.  At some point the dog causes you more aggravation than happiness.  Some people would have ended it at this point, but I couldn’t do it.  This dog had provided so much joy over his lifetime that I felt I owed him something back in return.  If he was hanging onto life this firmly, then I’ll hang with you, buddy. I’ll hang with you. (bd22)

I had a lot of time to prepare for that final day, although there is nothing you can really do to soften the blow. As if you could prepare for getting run over by a Mack truck.  But I had imagined how that day would play out, and except for one remarkable moment, it went very much as expected.

Midnight was on my lap as I called my wife to explain the dire situation.  She pleaded with me to let her take care of it because she knew how difficult this task would be for me.  But I adamantly refused.  This was my responsibility.  When the dog had a need, he expected me to take care of it and this would be the final one.  Also, my wife could not come home until afternoon, and I had resolved that Midnight would not suffer one minute longer than necessary. (bd23)

I needed to go upstairs to get the number for the veterinarian and I lifted Midnight off me for the next to last time.  However, I wanted to be very gentle with him so I raised him up higher than normal. And then something incredible occurred.  As I held him up, our faces were about a foot apart. Then he widened his right eye as far as it could stretch. I saw his eyeball move as he struggled to focus in on me. With whatever eyesight he had left, he was trying to see me as well as he could. I may not have wanted a last look, but Midnight sure did. (bd24)

And just like 16-½ years ago when we were feeling the same apprehensive at that first look of “hello”, I know we were sharing the same emotions at this last look of “goodbye”.  And it was “goodbye”, as Midnight started to fade out after that.  (bd25) (bd26) (bd27).

That evening, my wife quickly removed all reminders of the dog from the house because she knew this would help me.  But the next morning when I went outside to get the newspaper, I saw his footprints in the snow.  Midnight had made so many impressions on my life and now he got to make just one more. 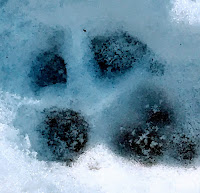 The bond between Midnight and me was so strong and so rich, however when a tight bond is torn asunder, a piece of you is ripped away.  It leaves a gaping wound that is intensely painful and takes time to heal.  But the worst part of this, which is so cruel, is that the piece of you that is gone is a good piece.  It is kind, and patient and loving, with all the pure traits in you that a dog brings out. Dogs make us better humans, and when they go, we lose something special within ourselves. (bd29) (bd30) (bd31) (bd32)

The Bible introduces to the concept of unconditional love. It is a concept difficult to comprehend in this life.  One of those things best accepted by faith.  But maybe that’s why God created dogs the way He did.  You get to experience unconditional love every day because it is living under your roof. (bd33)