(My new book Will There Be Free Appetizers? is now available!)

Back in January I blogged about my experience with the nasty influenza strain that sickened many people across the country this season.  My intense symptoms began on a Sunday, unfortunately I was contagious on Saturday and infected my wife, who fell ill on Monday.

Therefore, we had two very sick people in one household, my wife downstairs and me upstairs, trying to get through this awful malady.   I began posting “Reports from the Ake Infirmary” on Facebook as an amusing way to update friends and family on our conditions.  Through friends’ responses to these posts I learned just how nasty this flu was, with some people being hospitalized and others stuck at home for three or four weeks.  Most people who got this nasty flu strain were down for at least five days.

By Wednesday, I was worried about my wife. She would need a doctor’s note if she missed one more day of work and neither of us was in any shape to drive.  But then something wonderful happened! We caught a break. Thursday morning my wife felt much better and went back to work.  She was ill for only three days, an exceptional recovery for this virus.

I immediately posted on Facebook that even though I was still very ill, my wife was all better and had returned to work. I thought this was very positive, uplifting news. Just great news. Really, really, positive, great news.  But of course, I was wrong.  Because sometimes when men are communicating with women, they think they are saying something good, but it turns out they are really saying something bad.  My post got a lot of women hot, but not in a good way.  I had somehow touched a sensitive area.  No guys, not that area! A bad area, a very bad area, indeed.

So because I was still be sick, my Facebook feed immediately started to blow up with comments from women such as these:

“That’s because you are male. Sorry, did I just write that out loud?”

“We all thought it. You just said it!”

“Hmm, imagine that. The female is bouncing back – the male is still not feeling good (wink emoji)”

“We have to. Our men milk a splinter, so a cold knocks them out for six”

“ “Milk a splinter” is the best line I’ve heard in ages!”

Usually when I say something that I feel is positive but is somehow misconstrued by a female, I hack off only my wife. But this comment generated estrogen-fueled rage throughout the country.  I knew somehow I had hit a nerve, a strong nerve, that I had no clue even existed.  Apparently, this is a big deal to women because they were ravaging me despite the following:

1.   These women have an overall positive opinion of me.  I mean they are still my Facebook friends regardless of some of the outrageous things I post. They like me.  And some are close friends, including one from back in high school where we may or may not have engaged in .. ah, well, let’s not go there.

2.   I am happen to be extremely ill at the time of this mock-fest.  The women showed no restraint in “kicking a guy (big emphasis on guy) while he was down”.

At first, I was offended by this but then realized that most women must be super-annoyed at this occurrence. But as a male, this issue breaks down this way:

Women are upset that after suffering from a cold or flu virus they regain their health, and feel much better, faster than men do.

The female response to this statement – Heck, yeah! Whiny man-child!

This is of course a prime example of “Female Logic”.  Female Logic is a highly complex way of thinking using the mysterious component known as estrogen.  While this logic is considered obviously correct by its formulators, it is totally baffling to the entire male population. Conversely, testosterone-driven “Man Logic” is sometimes not comprehensible to anyone, and is responsible for all the wars ever fought throughout history.

However, there is scientific evidence indicating cold and flu viruses have a more profound impact on men than women, allowing women to suffer less and recover faster.  And I wholeheartedly agree with all scientific studies which confirm my existing beliefs or support my views.  All research which contradicts me is flawed, biased and in a word “wacko”. 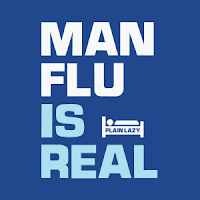 Several studies have found that men have more symptoms and higher fevers when confronted with viruses.  And I believe, even though I am not a doctor, I have found the true reason.  A doctor from the University of Kansas said “The female hormone estrogen slows down how fast a virus multiplies”.  Well of course it does!

The virus be like, “Hey, you want to multiply?”

The female body be like, “Not right now. I have a headache and I’m not in the mood. Go away!”

And there are probably good, biological and evolutionary reasons for this, which I won’t go into because I would be labeled as a sexist, misogynist, pig-monster. As well as names I would have to look up and I don’t have time for that.

So Ladies, you must admit that if you are all independently observing this phenomenon, and scientific studies back this up, then men do actually get sicker, and so we are all good right?  I sense, no we are not, for one important reason.

Women claim that men excessively whine and complain when they are ill (milk a splinter).  Of course, I have no idea what they are talking about.  I myself suffer in silence and fight off my maladies stoically and machismo-fally like a real man.

Okay, okay. I do realize that my wife did join into the Facebook banter detailed above with this comment:

“That’s what happens when you give it to your wife (uh, she means the flu). Now I have to deal with his complaining”.

I really don’t know what she is talking about, and may I point out that many people lie on Facebook.  For the record, I was sick for nine days, six days longer than my wife.  And I wasn’t milking no splinters. I may have complained once or twice but only because I was delirious. Yeah, delirious – that’s the

So guys, I would highly recommend that we stop whining and moaning so much when we are ill.  We are not getting any sympathy from our women by complaining.  We are merely torqueing them off.  Which means when we are feeling better and able to resume certain conjugal activities, your urges may be blunted by estrogen-generated resistance.

However, I must remind you ladies it is unproductive to get overly perturbed that you have a biological advantage which allows you to better deal with viruses.  If you disagree, may I point out that it is probably in the same category of biological advantage that enables women to outlive men by a significant number of years (27 in my mother’s case).  And don’t worry, a man, no matter how much of a whiner, has never been able to complain that his wife has outlived him.