As the U.S. begins to negotiate with North Korea about giving up their nukes, the big question is why Kim Jong Un is so eager to bargain now. Many people believe it is due to our policy of “maximum pressure” and show of military strength, but I don’t believe that. I think something wonderfully more basis is at work here. I’ll call it the “Foodie Theory”.

Just a few months ago, a delegation of North Koreans traveled to South Korea to watch the Olympics. North Koreans don’t travel abroad very often and this was the first time anyone in the group had been to South Korea.  This was a big deal, thus all those photos of Kim Jong Un’s sister, Kim Sol-song, watching the games.

Reportedly, there are several fast-food restaurants, including a KFC, located near the main Olympic arena. And it can be speculated that the North Koreans dined from these places several times while at the Olympics.  Now I don’t know the quality of the Korean KFC. I assume it uses the same recipe and is fairly tasty, but that the breasts are smaller, because uh, …. Well it is Korea, you know. But regardless, eating KFC and American-style burgers for the first time had to be a glorious treat for the North Koreans. Remember the thrill of going to Mc Donald’s as a child? Yeh, it feels like that.

Actually, it feels much better because Korean food is freakin’ horrible.  It is by far the worst of your Asian cuisines. Consider that there are many Japanese restaurants and even more Chinese buffets around. You never see a Korean buffet because there are not enough edible Korean dishes to create a buffet. And the few Korean restaurants around cater almost exclusively to Koreans.  And any grilling master in the U.S. will tell you Korean barbeque, while good, is not great.

Now I do have to admit, I’ve only tasted Korean food once when I foolishly tried the “Korean chicken” at the Chinese buffet. Yeeeech! And this is South Korean food, imagine how crappy the food is up north.

But to these isolated North Koreans, this American-style fast food was their first real experience with Western culture. Nothing says American capitalist pig like a Big Mac, okay maybe a Mc Rib does, but that’s beside the point. In America we are experts at rapidly processing foodstuffs into highly-seasoned, unhealthy globs, for which we pay exorbitant prices so it can make us fat and eventually kill us. Fast food is something that makes America great.

Now several members of the North Korean delegation were no doubt spies, who had no interest in the Olympics but were charged with bringing back useful information to the Grand Leader.

Glorious Leader: What you find in Pyeongchang?

Glorious Leader: Why so good?

Spy #2: They fry it in the United States, in Kentucky, and somehow, it’s still piping hot and delicious when it gets to Korea!

Glorious Leader: Who run this place?

Spy #3: It run by military. Under direction of a Colonel Sanders.

Glorious Leader: This is not a problem. We find recipe and make chicken here!

Spy #1: No can get recipe! Big military secret! Special blend of 11 herbs and spices.

Glorious Leader: Rats! Enough about the chicken! What else was there?

Spy #2: With chicken you get whipped potatoes, gravy, and fluffy biscuit.

Spy #3: The chicken is so delicious, that we all licked our fingers after we ate.
Glorious Leader: It’s finger-licking good?

The Foodie Theory holds that immediately after the Olympics the North

Koreans started plotting on how they could obtain mass quantities of American fast food. Remember your first economics lesson on “Guns or Butter” that explained that a nation has to decide how much to spend on military versus consumer goods?  We’ll this may be a literal version of that: “Nuclear Bombs or Chicken”. And after tasting the colonel’s extra crispy with two sides, those nukes may have lost some of their flavor. So now the North Koreans may be willing to give up their nukes to gain access to Happy Meals.  This is so beautiful, I’m about to cry.

Lest, you think this is totally farfetched, one of the real negotiation requests of the North Koreans is they want to get a fast-food hamburger restaurant franchise in Pyongyang (I’m not making this up!). It would seem Kim Jong Un is a more a fan of burgers than chicken. If this happens, my money is on 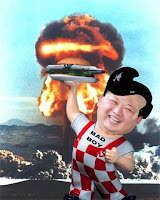 If the current negotiations fail, the North Koreans lust for fast food still does provide a way to end the conflict. Remember the hot dog guns that used to shoot wieners into the stands at baseball games before the lawyers stopped the practice due to injury liabilities?  I propose we convert our grenade launchers so we can shoot burgers and chicken pieces across the DMZ to the North Korean troops.

In other words: We’ve got legs (chicken), we need to know how to use them.

In propelling this food over the border, we could claim this is humanitarian aid, not an act of war. We have done air-drops of food many times before. This would be a much more targeted strike however.

And it would work. After tasting a Big Mac, the North Korean soldiers would drop their weapons and quickly travel south shouting: “I surrender! I surrender! Yes, I want fries with that!”  Even though no tacos are involved, this would create a literal “Run for the Border”.

But let’s hope the current talks are successful and a lasting peace is established. And a brand-new world opens up, with fast-food restaurants covering all of North Korea. It would be a beautiful thing, children. A beautiful thing. I’m tearing up again …

I used to make fun of those KFC commercials touting their chicken as a way to bring families together at night around the dinner table.  I am laughing no more, as maybe it was KFC food that has brought the world family together at the negotiating table.