I Got A Name – Actually Two

This post is about solving a nearly 100 year-old mystery that involves illicit sex.  Now that I have your attention, let’s begin!

I have a confession to make – I’m not the man you think I am. Don’t worry, it’s not like a Bruce Jenner thing, yet ….

When I was 15 years old, my mother sat me down at the kitchen table for a talk. Now it wasn’t THE TALK, that had happened a few years earlier. But I knew this was going to be serious because we were back at the exact same setting and her face held the same expression. Apparently, all serious discussions in her family were held at the kitchen table.

And the topic was important. It wasn’t the facts of life, more like, here’s a significant fact of your life, that you didn’t know. My mother then calmly explained to me that my dad had been born illegitimately. My grandmother had become pregnant in her early 20’s and not married the guy. The person I had thought was my grandfather, was actually an impostor, who had married my grandmother later in her life.

This talk was even educational. I learned the actual definition of “bastard” and “son-of-a-bitch” that day. I have no idea why this particular information was important. But this part of the conversation befuddled me, because the father I knew was a good father, and a good man, and in no way resembled the colloquial meaning of those terms.

My mother explained to me that my dad’s uncles had helped raise him and provided him with terrific male role models. So even though technically my dad was a bastard, he didn’t act like one – uh, you get the idea. But he had a difficult childhood, the other boys picked on him incessantly because he didn’t have a father. And the family was poor, and poor for a long time, until my father got a job in a Goodyear factory when he was 25 years old.

Of course, I asked who my real grandfather was, but my mother did not know. My grandmother had died five years previously and had never told her. And to her knowledge, my dad had never told anyone. This fact of his life was deeply embarrassing to him and she had cautioned me not to broach the subject with him.

This was a lot of information to process and I wondered why my mother had even told me at this time. But my mother was an intelligent woman, much more intelligent than anyone gave her credit for. She realized that her smart, analytical son, would one day figure out his staged “grandfather’s” last name was not the same as his father’s, and might suddenly blurt this question out at a most inopportune time. As we will soon see, that could have been disastrous.
But now she had left her inquisitive son an unanswered question. And if you know me, and especially if you’ve ever worked with me, you know my brain doesn’t accept unanswered questions. Open questions create a hunger for an answer. Which in this case burned within me for 45 years.

Now what to make of this incident? Illegitimate children were rare in the 1920’s. When a couple found themselves in this type of situation, the man was expected to do the honorable thing and marry the woman. But that didn’t happen here, so is it right to assume my grandfather was a ruthless cad of questionable morals?

However, this salacious encounter took two willing participants. And other evidence (which I will not share)   indicates my grandmother was not a pillar of virtue. (Please understand that writing these things about your grandmother is extremely uncomfortable). I’m really having a tough time coming up with the correct term here, so I will use “frisky”. She was frisky. If I was writing about your grandmother, I’m sure I would use another term, but I’m not. It’s my grandmother, so frisky it is. And not in the cat food sense, either. Now, if it surprises you that 25%, and I emphasize, only 25% of my DNA is indeed frisky, then you haven’t been reading this blog a lot.

But I’m going to speculate that this wasn’t relationship sex, that it was a spontaneous roll in the hay that went disastrously wrong. If so, I doubt that either party desired to be married to each other and my grandmother, maybe assuming some responsibility, left the guy completely off the hook, not even listing him on the birth certificate. Of course, there was a chance the man was already married.

This decision, combined with the initial wayward choice, had dire, life-altering consequences for my grandmother. At the time, she was employed as a 22-year old school teacher, which meant her career was over, thus leading to those many years of financial hardship. 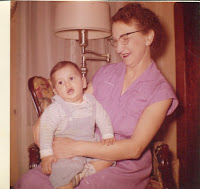 grandmother. She cherished her only grandchild. Look at her face in this photograph. You can’t fake those emotions. I was devastated at age 10 when she passed. And I realized that she, and the uncles, had done a tremendous job of raising my father, whom I respected just as much regardless of his history.

Still, that question remained. Who was my grandfather? My curiosity festered for a few years. And when I was 19, I decided it was time to ask my father about it. I mean, I was an adult, he was an adult, it was time that we all had an adult conversation about this adult topic.

So without warning, I asked him directly while we sat if the front room watching the game. The reaction was virulent and immediate. I forget his exact words. I imagine he shouted “Don’t talk about that!” But it wasn’t the words, or even the tone of voice that was the most ominous. It was the expression on his face. I believe parents and children have enhanced communication skills because they can precisely interpret each other’s facial expressions. And the look on my father’s face was the same one I imagined I would have, right before I killed someone with my bare hands. I had pushed a button that should never have been pushed. (This is why my mother didn’t want me figuring this out on my own). On the other hand, this was a legitimate question, and I did have a right to know, but there would be no answer.

And I carry it with me like my daddy did, But I'm living the dream that he kept hid

I quickly left the room and never mentioned the subject again in the remaining four years of his life. And there would be no death bed confession, he was standing when the end came, and he was dead before he hit the ground. Yes, he took that secret to his grave.

But my grandmother had not. She had found a way to provide a clue to this mystery, more than 15 years after her death. A few months after my father passed, my mother handed me an envelope. “Your grandmother thought that you should have this”, she said.

What could be in this envelope?

That will be revealed in: I Got A Name (Part 2)