Stick This Right Up Your Asparagus

This week I noticed an article in the Food section of the newspaper trumpeting a new asparagus salad recipe. The first four paragraphs gushed about how great this recipe makes the asparagus taste! 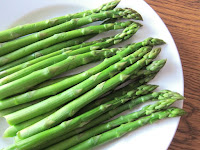 My reaction: IF YOU GOTTA SELL IT, SELL IT THAT BADLY, IF YOU GOTTA WORK THAT HARD – THEN THE STUFF TASTES AWFUL, REALLY AWFUL.

Now you might be saying, “But I like asparagus”. That’s fine, but when did we start worrying about you, instead of focusing on me? Which of course, is my only concern.

You can eat all the asparagus you want. Preferably in the darkness of your basement, with the vent on, so people nearby don’t have to breath the noxious fumes and have their meal ruined. And don’t forget to clean up the kitchen before you go, including that putrid brown asparagus goop that is always left over.

Does the writer of this article really think they can conceal the presence of asparagus in this salad? No, serve me this junk, and I will eat around it as skillfully as a dog avoids a small pill hidden in his Alpo. My relatives still talk about the Thanksgiving when someone thought it would be a great idea to try a new stuffing recipe, which included mixing pieces of squash in it.

Why, oh why, would someone risk ruining, utterly ruining, Thanksgiving by polluting one of the greatest foods on Earth with a foreign object? They probably read some foolhardy recipe in the newspaper about a brand-new stuffing dish that would be all the rave that Thanksgiving.

That day I had an important choice to make. I could either let my whole Thanksgiving dinner be ruined or I could improvise. So, I took my usually huge helping of stuffing and dug in. At the end of the meal, the stuffing was completely gone, but there was a big pile of yellow bits on my plate.

Apparently not. Alas, the stuffing still tasted funny, because you can eat around that crap, but it still contaminates it. Worst Thanksgiving ever.

I will eat asparagus under distress. Like when I’m at a high-falutin luncheon someplace where they think they can impress you by serving a high-class vegetable. Problem is, it’s usually served with a small piece of pork and a couple small “girly-type” red-skin potatoes. I have to eat the asparagus because it’s all I got. But it actually works out just fine. After I send the stuff down the chute, I am no longer hungry ….

To you menu planners out there: Could ya just serve some green beans? Some nice, fresh, tasty, green beans, instead of the awful asparagus? Green beans. They are green, they are vegetables, AND THEY FREAKIN’ TASTE GOOD!

I have even seen asparagus offered as an appetizer on some distinguished food tables. And while it does qualify as a “free appetizer”, it will never, ever grace my plate. Let’s see, I could have the bacon-wrapped mushroom, the spicy meatball, perhaps the grilled shrimp …. or the asparagus? HA HA HA HA HAAAAAAAAAAAAAAAAAAAAAAAAAAAAAA (evil laugh).

To me asparagus is the anti-appetizer, due to the opinions previously expressed by my stomach. Maybe on my next diet, I will start every meal with some asparagus. On second thought – maybe not.

Now the weird thing is that I should like asparagus. My mother was so influential in my food preferences. She taught me:

There is only one food, only one, that my mother enjoyed whose preference was not passed down to her son. My mother loved asparagus, and as you might have deduced, I do not.

So this guy thinks he is going to have more influence over me than the woman I suckled from? GET REAL!

So now there is this constant stream of Internet and newspaper articles promoting the tastiness of all sorts of crap. They recommend such things as bugs, assorted fungi, larvae, tarantulas, rotten cheese, and maggots. Personally, I would also include kale on the barf list, although I know some people enjoy it.

There is even a coffee called, kopi luwak, which is made from coffee beans collected from the feces of an Indonesian cat.  Incredibly, in the spirit of Dave Barry, I am not making this up. No thanks, I’ll just have some Maxwell House.

But are any of these new weird foods better that a hot corned beef sandwich on rye? With pickle, mustard and fresh chips? And it hasn’t even been pooped out by a cat! Eat the corned beef and forget about all the weirdo substances these morons are trying to get you to try. EAT THE &@%# CORNED BEEF.

So, I hope you all learned something important today. Which is, if you are considering inviting me over for steaks this summer, I like mine well-done. And if you are serving a summer salad with the meal, macaroni is good, pasta is fine, even broccoli with sunflower seeds is rather tasty, but under no circumstances should you put any asparagus in that salad.