Counting All Angels – That was one big hark!

The world in solemn stillness lay
To hear the angels sing

So many of our favorite Christmas carols make reference to the angels singing in announcing the birth of Christ. The basis for this is Luke 2:13-14

And suddenly there was with the angel a multitude of the heavenly host praising God, and saying,
Glory to God in the highest, and on earth peace, good will toward men.
This event was so magnanimous and spectacular that a multitude, great company, or legion (depending on the translation) of angels were dispatched to Earth to sing praise to God. But just how many angels were there in this choir?

Now Don, why would you even ask that question? No one knows how many angels there were and it’s impossible to even estimate!

But these are the type of questions my hyper-active mind generates. And once the question enters my brain, it demands that I try to answer it.

Furthermore, it’s what I do in my job. I forecast things that are difficult to forecast and I make estimates about things that are hard to figure out. So I am going to try to do this seemingly impossible task. And I assure you that when my coworkers read this, they will laugh out loud, because they have to deal with my lunacy regarding stuff like this all the time.

The question is: How many angels appeared to the shepherds, singing praises to God, at Christ’s birth?

Surprisingly, the answer to this question may be zero.  You see Luke 2:13-14 doesn’t actually say the angels sang, it says they were praising. However, we have always assumed the angels were singing those praises because in our culture we praise God through song. So, all the Christmas carol reference singing angels.

Now if the angels weren’t singing, they were at least chanting. It had to be scripted praise for the large group, or choir, of angels to be understood by the shepherds. I know this because years ago, I had to drive through a group of striking workers at our factory who all yelled different insults as my car passed by.  It was comical because it all sounded like static and I couldn’t hear any actual words. And that’s the literal purpose of cheerleaders, right?  To coordinate the cheers so the players get the message.

Therefore, those angels had to be singing or chanting in unison. And while 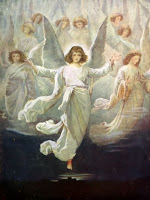 there are some Gregorian monks who would argue for the latter, I think we can assume the angels were singing if we interpret the word “saying” in Luke as “communicating”. And such a large choir, would have had to practice these praises in advance.

Scholars debate about how many total angels exist. The Bible implies that the number is huge. If we interpret the term myriad of angels literally (Revelation 5:11), there are at least 100 million angels (10,000 times 10,000). It is unlikely that God would have sent all 100 million to Earth at the same time. Now if it were me, I would be tempted to “send the house”, but I’m not God, and everyone should at this point thank God for this. However, the upper limit to our question is 100,000,000 angels.

The record number of people in an earthly choir (signing the same song in one place) is 121,440 set in India in 2011. Let’s assume that angelic choir has to be greater than anything that can be accomplished on Earth. Taking into account future efforts to break this record, I will set the minimum at 200,000 angels.

In order to narrow the range, I have to make some assumptions. And these assumptions are difficult because they deal with God, angels, and an incredible event occurring a long time ago.

God did not send all the angels to Earth because they all could not have been seen by the shepherds. This is an excess of angels. Yes, this was a big event but all the angels were not needed to accomplish the task. We know from the Bible there are different types and ranks of angels.  Let’s say the trip to Bethlehem was a reward for the top 1% of the angels. Yes, just like a Mary Kay bonus. That reduces the number down to 1,000,000 angels.

Could one million angels hanging up in the sky be visible to shepherds on the ground? The number of angels needed to completely fill the sight line of shepherds on the ground can be calculated using equations containing things called “parabolas”, but I’m not a mathematician, so I won’t attempt this. You would have to make assumptions about the size of an angel, but my guess is that it took fewer than 1 million angels (1,000 rows of 1,000) to fill the sky.

The decibel level of the singing angels can’t be high enough to wake the people in Bethlehem city. The announcement of Christ’s birth was only intended for the shepherds. This supposedly is because they were the lowest in that society, and Jesus came to Earth for all men. Hey, the only job requirement of a shepherd is that you must be smarter than a sheep. Oh, and you are working third-shift. Yes, you are on the bottom rung of that city and yet you are worthy of hearing this good news first.

It may have been a silent night up to that point, but hundreds of thousands of signing angels make some noise. The praises didn’t alert the townspeople and more importantly, it didn’t wake the baby.

So, let’s assume the angels sang softly, and they were positioned facing away from the town to reduce the noise factor. But again, the more angels, the more decibels. This also argues for a total number under one million.

So this Christmas, when “with the angelic host you proclaim, that Christ is born in Bethlehem” – know that your harking about a huge number of angels.

And when you step outside tonight, image the sky filled with half a million angels, all singing praises to God. Wow, I wonder what the angels sound like when they sing ….. probably better than the best Dolby system ever created by man. Oh, what a spectacular night it was!

Merry Christmas to All! And a Happy New Year!