Heading Off A Cat-astrophe

Here are my most enchanting memories of last year, which never made it into a blog post.  Now there could be hundreds of these moments.  However with my fading memory, I can only remember two.

We watched my daughter’s two cats, Dede and Buddy, while she prepared her house for sale. I liked having the cats in the house. I work from home and enjoyed their company – on most days.

Generally, they were not a distraction and stayed out of trouble. They are not bad cats; however, they are cats, nonetheless. Occasionally they would jump on my desk while I was working, but never at the same time. If I didn’t spend enough attention on him, Buddy would plop down on my computer keyboard. “Try typing now, you so-called industry expert!”
One day, Dede’s tail did  suddenly appear on-screen during an internal video call, but otherwise, no big deal.

But Cats are a lot like women when it comes to logic. They are unpredictable and tend to do things for which there is no logical explanation randomly.

Every couple of months, I get to be a guest on the Road Dog Trucking channel during Mark Willis’ show on SiriusXM radio as part of my work in the trucking industry. It is very enjoyable to be interviewed for an hour on national radio.

My session was just about to start when Buddy appears out of nowhere and jumps on the desk. I never thought about shutting the office door because it is mid-afternoon, and I have not seen the cats the entire day. Why he waited for just this moment to jump on the desk is one of those random cat actions.

This is distracting, but I can easily handle this. Buddy just wants his head scratched, and as long as he doesn’t hit the keyboard, which has a needed spreadsheet up, I am fine. I can quickly rub his ears and set him back on the floor.

“We go live in 10 seconds”, the radio producer tells me.

And then without warning, Dede also jumps up on the desk. Now I have a huge problem, a cat-astrophe waiting to happen. Never, ever, before that critical moment, have both cats been on my desk at the same time. Complicating things, although the cats live together, they don’t really like each other, they tolerate each other. But the one thing that really sets them off and usually leads to a literal catfight, is when one cat invades the other’s territory. 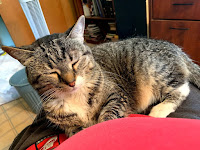 For example, let’s say one cat has jumped up on a desk and the other cat decides to jump up on the desk too.

“Our special guest today is Don Ake! How have you been?”

This was kind of a surreal experience in that I started talking to Mark, but my full attention was on the cats and the huge furry fight that could spill over into my lap any second. I was talking, but I really wasn’t aware of what I was saying. But I soon realized I had to refocus on the radio show before I said something stupid or unintelligible such as: “I believe the key issue in trucking today is the coughing up of hairballs on the road.”

Fortunately, the cats moved to opposite sides of the desk. Buddy was disappointed I wasn’t paying any attention to him and jumped off the far end of the desk. As soon as he left the room, I grabbed Dede and sat her on the floor. Cat crisis averted. Thousands of truckers were spared hearing a live catfight on the radio; such an awful distraction could have led to several dangerous accidents on the road.

As soon as I stopped hyper-ventilating, I went on the have a great show with Mark. All in a day’s work! Sometimes I just love working from home.

I was standing in a long line, waiting to check out at a deep-discount store. There was only one line open since the back-up cashiers were busy stock shelves. Finally, the announcement was made over the loudspeaker that another cashier was needed.

I know she was elderly because I had been standing in front of her for what now seemed like hours, hearing her rambling on about the cost of rugs and what a great deal she was getting on those in her cart. I casually glance back and notice her cart is full of merchandise, while I only have five items in my basket.

The second cashier turns her light on, looks directly at me, and says
“I will take the next person.”

With that, the old lady pushes fast and hard on her cart to be first in line at the second register. But she doesn’t move an inch. She now resets and pushes even harder the second time, but the result is the same. The cart doesn’t budge!

How could this be? Why isn’t her cart barreling toward the cashier at warp speed? Well, it appears that somebody, maybe a large middle-aged guy, perhaps with a shaved-head, had firmly, but subtlety grabbed the front of her cart, impeding her progress and thwarting her plan.

When she quit pushing the second time, I quickly slipped around her cart to the second cashier and set my products on the counter. The old woman was so stunned she never moved her cart, meaning not only wasn’t she first in the new line, she was in third place in the first one.

Then the bitchin’ started about the mean man who had grabbed her cart. The cashier glanced up at me and said softly, “But you were next in line.”
I double finger-gunned her and replied, “And that’s why you're ringing me up now, darlin’.”

I had to walk past the old woman as I left the store, and she again started bitchin’ at me. Now, who do think possesses the bigger month? Get that weak stuff out of here, old woman. Either bring it strong or don’t bring it at all. It was her second big mistake of the day but probably made a good story at the bridge club.

I know I could have just left her cut in line, but it is the principle that counts. And perhaps I provided a public service, teaching her the lesson of taking your proper turn. Maybe next time she won’t rudely shove her cart in front of someone. Alright, so we all know that’s not going to happen, but at least I tried.