I was doing some spring cleaning when I found some relics from my past. Stuffed into the corner of the drawer were several pairs of wrist bands. Now I want to be clear, these are not fashion items or have any metrosexual implications, but are terrycloth sweatbands worn on the wrists to keep my hands free of sweat.

In the ‘70s, these were a part of my standard basketball uniform, which included Converse high-tops, by the way. I would not go on the court without my sweatbands which I believed provided me with superhuman strength. When I wore my sweatbands, I felt just like Wonder Woman with her power bracelets - - without the heaving, prestigious breasts, of course. 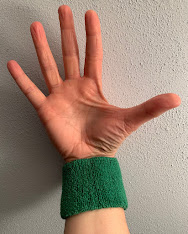 Way back, the guys in my church basketball league knew when they saw me wearing my wristbands and my headband, that I had indeed come to play. But I do want to say at this time: I was not a dirty player. I mean, this was church basketball, and thus, it is supposed to be played with a certain decorum, where you treat your opponents in a highly Christian manner. And to my best recollection, I upheld these sacred standards without fail.

However, my wife, even though she never saw me play basketball, would disagree. You see, she started attending this church later, and we would encounter someone new to her, and she would ask:

And my reply would be:

“We used to play basketball in the league. We don’t really get along.”

After about the fourth time this happened, my observant wife asked, “Why doesn’t anyone you played basketball with like you?

Now back in the day, I may have thrown an elbow or two, but that was “old school” basketball. Nowadays, when a player gets a rebound, all those guys start slapping at the ball, sticking their fool heads right in there to pry it loose. I didn’t take kindly to dudes trying that with me. My elbows were merely a tool to help me retain possession of my rebound and they were used continuously throughout the game for that purpose. But I repeat: I was not a dirty player.

Likewise, when those little guys would try to run around me to steal a rebound, I would spot them in the periphery, and just when they thought they were by me, a subtle hip check would send them crashing into the wall behind the basket in the small gymnasium. But the wall was padded. They may have ended up stunned for a few seconds, but they didn’t break any bones. So, it was just basketball – that’s all it was – and I repeat, I was not a dirty player.

I find these new restrictive rules of the modern game, so distasteful and insulting. Everyone totally freaks out when a player throws an elbow – even if it doesn’t hit anybody!!!! Where is the fun and sport in that?

Oh! And these ridiculous flagrant fouls?  I don’t even understand what a flagrant foul is. Back in my day, if the guy didn’t have to go to the hospital, it was in no way a flagrant foul. What if the infraction drew blood? Well, that’s what towels are for.

Fortunately, I played ball in a different era. But I am proud to say that I never once fouled out of a church league basketball game. Of course, that’s because I was a master at using those elbows when the ref wasn’t looking.

Today, if I played like that, I would get thrown out of the game in the first three minutes. But that’s because they changed the rules, not because I was a dirty player. I would have also hated that dreaded video review.

So, what to do with these old wristbands? I can’t call up the old gang for a pick-up game. Once they see me with those sweatbands on, they will leave before they get elbowed.

But nobody wears these anymore; they are part of a bygone era. You never see any current players donning them – do they not sweat? I thought that perhaps I could start a retro-trend by wearing them in daily life.

I was excited to wear them on my daily walk, thinking that maybe the wristbands would impress some of the hot, young chicks in the neighborhood.

Hot, young chick: What did you do to your wrists?

Me: Nothing. These are my sweatbands. They keep my hands dry by not letting the sweat roll down my arms.

Hot, young chick: You sweat that much? Ewwwwww!

It also didn’t go as planned on the Zoom call at work.

Boss: Ake, did you hurt your wrists?

Me: No boss, these are my sweatbands. I’m planning on working so hard this afternoon that I don’t want to get my keyboard all sweaty.

Boss: You sweat that much?

Everyone on the Zoom call: Ewwwwww!

I guess that wristbands aren’t going to make a comeback, although they are still used for tennis, and I think I last wore mine in a tennis league in the ’90s.

However, regarding basketball, the one thing you need to remember is: I was not a dirty player. I realize some people reading this may bring up the incident during church basketball where Steve, a very nice, peaceful, Christian young man with a choir-boy face, threatened to “punch my lights out” in the middle of a game. But may I point out, Steve remains my friend today.

Also, my former coworkers may refer to an incident during a Canton Corporate Cup co-ed basketball game where I sent a woman sprawling hard to the floor when she tried to drive around me for a layup. I do regret not helping her back to her feet. That counts for something, right?