Raising A Stink In North Korea

Recently, North Korea issued its first official statement to the Biden administration and warned the United States to refrain from “causing a stink” on the Korean peninsula. (true).

What do bad smells have to do with international relations? This statement does not make sense and is silly even for the North Koreans. So, I have come up with three possible explanations for this bizarre wording. Two of these are relatively innocent, but the third – Errrrr, Errrrr (the Lurch moan) – is insulting and defaming to every proud citizen of these United States.

Maybe the North Koreans really meant to say something different but used a cheap translation software such as Google Translate to convert their message. I once used Google Translate to wish my Filipino Facebook friend a Happy Birthday and wound up engaged to her for a month. Such a big misunderstanding. I had to buy her family a goat to officially break the engagement, according to her village law. So “refrain from causing a stink” may just be a bad translation.

Explanation 2 – Intentional Use of an Old-Fashioned Expression

Perhaps the North Koreans thought it wise to deliver their message in a language the 78-year-old Biden could understand. They undoubtedly heard about his “No Malarky” bus tour during the campaign and wanted to show how serious this threat was by using an old folk saying to communicate to an old folk. But if this were true, it would have been more appropriate to warn us about “raising a ruckus” or threatening to “give us a shellacking”.

I seriously, fervently hope this is not the real reason. Because if it is, it is an agism slur of the worse kind. But I fear the “refrain from causing a stink” is about something called “Old-Man Stink”. I know the politically correct term would be mature male smell. But let’s just stick with my term and call it OMS for short. 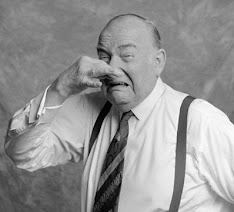 This is a distinct possibility.

Let’s face it; our president is up in years. Many people his age are in a rest home eating pudding, but he is now the leader of the free world and making many important decisions, including ones impacting North Korea. Decisions much more impactful than choosing between tapioca and butterscotch.

And most guys that old suffer from OMS to one degree or another. The condition begins with “Middle-age Man Smell” (something I may or may not have personal knowledge of). At some point, certain bodily functions that you have been able to fully control your entire adult life, begin to suddenly mis-fire at random. However, in middle-age, you are still aware that a malfunction has occurred, can deal with the consequences, and eliminate the resulting odor. This is why many middle-aged guys wear too much cologne. It is a pre-emptive measure to cover up the production of some unanticipated odor. And most importantly, middle-aged men still care about the social implications of their actions and what people think of them.

However, once a man reaches old age, he is unaware that a breach has happened, he can’t smell the result, his overall personal hygiene has eroded, and let’s face it, he just doesn’t give a darn what he smells like. The result is OMS. And by the time is ready for the rest home …. P-U-WILLY!

We know our president is at the age where he is producing OMS. But fortunately, according to my confidential sources in Washington, the Secret Service is taking drastic steps to control the damage.

Reports are that “Maggie” an odor sniffing canine, has joined the president’s security detail. Maggie’s previous job was to identify the source of pungent smells at the most prestigious elder care facility in the country, Manhattan’s Geezzera Villa. She is trained to quickly point out the compromised orifice before the stink is even perceptible to humans. So, if you ever see Maggie in an awkward position with the president, she’s not goosing him, but identifying a possible incident in Sector #2.

Likewise, Pete Sokeupski, the agent responsible for stopping sensitive news from reaching the press in the prior administration, is still responsible for dealing with leaks in the new one. Only now, it not information he is trying to contain, but literal leaks. The press has reported that Sokeupski is the agent responsible for transporting the “nuclear football” case. However, this is fake news. Pete’s case contains Lysol, disinfectant wipes, and Depends. There is also a canister of “Ancient Spice” (A special, highly-concentrated version of Old Spice) readily available to douse the president, in case of a Code Green. Sokeupski job is not to respond to nuclear war, just cleaning up nuclear-like spills.

So, the not “causing a stink” could in fact, be a slanderous, agism slur, which should be highly offensive to all Americans regardless of political persuasions. Of course, maybe I’m overeating since the North Korean leaders are such refined, gentle people.

We should respond to this threat by telling the North Koreans that if they misbehave, modifying the words of the prior president, “They will be met with old-man stink like the world has never seen.” Uh, I mean, never smelled.

And we can do it! We have millions of aging baby boomers producing a whole lot of stink that is going to waste. I’m sure all the retired veterans would be willing to don their old uniforms, unwashed, of course, and reenlist for this project.

We would line them up at the border with many new, smelly old recruits on a day when a brisk, hot wind is blowing south-to-north. Assuming of course that The Geneva Convention permits this.  You don’t want a stink commies? Well, smell this.