I Can Never Be Royals

Way back in 1776, we fought a war to break free from the British Monarchy. But we never really entirely escaped them, did we? Our citizens have always been obsessed with the queens and princes and dukees, haven’t we?

And now, these royals are even more intrusive since a pair of them have reinvaded the colonies. Oh sure, I know they have allegedly renounced their titles, but this is a massive charade. They still want to be treated special, like royals, as it were. They still believe they are better than us “commoners” and much more significant. Their self-importance is so overblown they did this fancy, “exclusive” interview with our Media Queen Oprah to tell us all about their precious lives.

But why, in 2021, does any royalty still exist? I mean the French quickly cut ties, among other things, with their kings and queens. The Russians buried the memory of their royals swiftly, in a way that left no czars. But somehow, the British deposed their Monarchy in a most refined manner. They castrated their power but left them living with their titles, castles, and a huge $h!tload of ca$h. Such a deal! And because the royals were able to pull off this scam, they continued to believe they were better than anyone else.

Let’s get real? Who is this Prince Harry guy anyway? Does he think he is better than me? But is he really better? Is he? I lace up my pantaloons just as he does. Okay, I’ve never actually owned any pantaloons, but after some YouTube videos and some practice, I’m sure I would lace them up the same way as that new 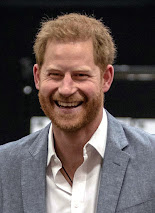 But now let’s really see who is the better man, me, or Harry? Let’s Duke it out, as it were. So, I’ll go mano y mano on a list of attributes, some of which are held in high importance by the female species.

Harry hits the scale at a respectable 6 feet 1 inch. However, I would literally be looking down on him if we were standing face-to-face.

I have written three, count ‘em, three humor books. Even Joe Pesci thinks I’m funny, so I take this one easily.

I don’t know this for sure, but I’m reasonably confident I could best Harry on a standard I.Q. test.

Wow! I am kicking some British hiney so far. Unfortunately, the contest is far from over.

But c’mon, Man! The royals have an unfair advantage because they had their pick of the most beautiful British women available for hundreds of years. They should be the most attractive people on the planet! Of course, we are talking British women, which might explain his father Prince Charles's anomaly. However, Princess Diana - homina, homina, wooo, wooo, triple-wooo – more than makes up for that.

Harry is reportedly worth around $50 million. My worth is not nearly that much. However, my bank statement only has one fewer zero, but that kinda makes a big difference.

But c’mon, Man! Up until he moved to the U.S., he was still receiving a yearly allowance of $6.9 million dollars from his father. That breaks down to $132,000 a week! The highest weekly allowance my father ever paid me, which stopped when I got a job in college, was $20.

Harry was educated at the famed Mynor’s nursery school, the exclusive Wetherby prep school, the renowned Ludgrove School, and received certifications at the prestigious Eton College.

I read some best-selling nursery school books and was educated at the well-respected Publicious Academies of Akronia. I hold two degrees from the well-attended Zipstonia University in Rubbercitia. One of these is a graduate degree – So there!

Harry reportedly was a top-tier athlete in college, excelling at polo and rugby. I lettered in tennis in high school, but Harry probably took tennis lessons from Virginia Wade and could beat the snot out of me. I haven’t ridden a horse since I was ten years-old, but I do own several polo shirts. I could still beat him in hoops, though.

Harry served in the army for ten years, achieving the rank of Captain, with two tours in Afghanistan. I too was a Captain - of the safety patrol boys at my school. Harry may be a blue blood but I got to wear a special blue badge! And I can fight - I once beat up this fat kid named Albert in the fourth grade.

Let’s just skip this one.

Harry is a selfish, self-centering, self-absorbed, narcissist with a tremendous ego and an overblown sense of importance.

Advantage: Okay, so we’ll call it a tie. Let’s just move on.

I must concede that Prince Harry is much more exceptional than commoner Don. I lament that I will never be royal. It just don’t run in my blood and I crave a different kind of buzz.* But wait! There is one more category!

That recent interview mentioned previously revealed some troubling, I say troubling, traits. Harry, it appears you married a whore – an attention whore, that is. Oprah was plunging that microphone into many sensitive, personal areas and your woman thoroughly enjoyed every minute of it.

Your honey also is a drama queen, and a rather whiney one at that. No matter how beautiful you are, it’s a bad look to complain about your cherished life when so many people are still suffering economically. Us commoners have a very common expression: Happy wife – Happy life. Let me ask you this one: If she is unhappy being married to a rich, handsome prince, then when is she ever going to be happy? Us regular chaps call that “high-maintenance” and you’ve got yourself a nuclear power plant on fire.

You could have had any woman in the world. Your pick-up line being, “Hi there, I’m a rich, handsome prince, really I am. Wanna see my castle?

Yet, you willingly choose this one? Oh boy, you have made a big mistake and I wouldn’t want to be in your Gucci moccasins, no matter how attractive and stylish your woman might be.

She's too phat for me,

I don't want her, you can have her,

Please do that for me.

“*” adapted from lyrics from “Royals”