Make Mr. Potato Head the Man He Is Supposed To Be

Hasbro recently announced the addition of a gender-neutral “Potato Head” product to its iconic Mr. Potato Head line. This has caused a vicious debate among people. You do realize that we are obsessed with fighting about children’s toys and books, while over 1000 people a day are still dying of the plague, don’t you? There’s no masking this: The bat-flu has not only infected our bodies, but our brains as well.

Hasbro’s concept is to provide a base, gender-neutral potato to which you can add or replace whatever sex-identity parts you feel like at the moment. Strikingly similar to what surgeons can, and are, doing today. (I realize some readers will interpret the previous statement as a sarcastic barb, and others will see it as a positive declaration. Which one is it? Yes, it is). The other consideration is that potatoes are naturally gender-neutral. There are no male and female potatoes. So, if Hasbro is the one that created potato genders, do they not have the right to revoke them?

You see, the so-called “Mr.” Potato Head is missing an essential body part – he doesn’t have a wiener. And I don’t mean “wiener” in the food-sense. I mean wiener in the wanker-sense.  He has no wiener. He has no wanker. He has no man-parts at all.

And the argument about cartoon characters and dolls not being anatomically correct doesn’t apply here because Mr. Potato Head is all about the parts and putting the parts on his potato-body. You got the eyes, you got the ears, you ever got the mustache – but no wanker – no man-parts - none.  Can anyone say Mr. Eunuch-man? Mr. Potato Head is missing a critical head. The spud is missing a stud. 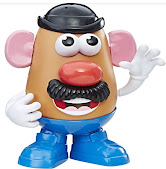 This is an outrage! I am so upset with Hasbro over this. He’s made you so much money over all these years. You market him as Mr. Potato Head, but you never once gave him all the parts that truly define manhood. You never, ever, gave him a wanker! How could you? How could you be so heartless? Or, in this case, so wankerless.

Mr. Potato Head has had to endure this shame for almost 70 years. You have forced him to live a tortured, humiliating existence. You’ve made him complicit in selling a disgraceful lie. If that’s not cruel and unusual punishment, I don’t know what is.

And you have perpetuated the lie by including Mrs. Potato Head and the Potato Tots in the scam. Oh yeah, where do you think these Tots come from? Who is the birth father of the Tots? Do you think potatoes just grow in the ground?

We don’t know who the real father is do we? But we know it can’t be Mr. Potato Head because you never gave him a wanker! I’m tempted to call on Maury Povich to determine the father, and yes, potatoes do have DNA. I suspect the culprit could be that Idaho Potato Farmer guy because, let’s face it, he likes potatoes a little too much. Regardless, there’s some illicit germination going on here.

So Hasbro, since you raised the potato gender issue, I think it’s time to correct this awful injustice. I’m incredibly offended by the fact that you are presenting Mr. Potato Head as a mister but not providing him with any mister parts. When women refer to me as “mister”, perhaps they believe I am as ill-equipped as Mr. Potato Head. This makes me feel diminished and uncomfortable, so I demand you cater to my feelings! Because that’s how it works in 2021.

Therefore, you must provide Mr. Potato Head with the wanker he so richly deserves. I believe this will also appease all those people who are upset with you for introducing that gender-neutral Potato Head. Please throw those people a bone, or a boner, as it were.

I would suggest equipping him with a man-potato and two tater tots. It’s a children’s toy, so I wouldn’t go with a large russet potato; a standard redskin will do. Sorry if I offended anyone with the term “redskin”.