With all the trivial news stories such as vaccines, variants, and Mars landings, you may have overlooked that pertinent (actual) article about the Florida man who stole an engagement ring from one girlfriend and used it to propose to his other girlfriend.

You might want to laugh this off as just some guy being stupid, but I believe this unfortunate episode explains a lot about how male brains operate and the problems which result. But I do want to emphasize upfront: I am not condoning this man’s actions. I am merely attempting to explain them for the edification of all.

You see, Lance had a problem. He was dating Linda, and the relationship had progressed to a point where he was ready to commit to marriage. However, his resources were insufficient to buy Linda an engagement ring. And without that big, sparkly ring, his chances of sealing the deal, and of course scoring big-time that evening, were slim.

But Lance came up with a Man-Plan, featuring basic man-logic. Understand that man-logic is characterized by its simplicity and practicality. It’s not like that woman-logic, which is so complex, convoluted, and complicated, taking into account feelings and relationships and all those pesky “what-if” scenarios. Woman-logic is more complex that calculus or quantum physics, because those disciplines can be computer programmed, whereas woman-logic cannot.

As Lance was getting ready to propose to Linda, he happened to be also romantically intertwined with Marla. Now I do realize this interjects some moral issues into the narrative. But my purpose is not to judge poor Lance. I mean, maybe he is a Mormon. Or perhaps, he was just conducting his own version of The Bachelor, starring himself as the main stud-star. And in this episode, he’s ready to present Linda the final rose. Anyway, remember, I’m not here to defend his actions. I’m just trying to explain them.

However, Marla possesses a critical attribute that Linda doesn’t have, and Lance desperately needs, a wedding band/engagement ring leftover from her previous marriage. So, Lance connives up a Man-Plan where he will stealthily remove the rings from Marla’s place and offer them to Linda in a marriage proposal. Now, I know this introduces another pesky moral issue, but I’m not here to condone his actions. I’m just trying to explain them.

Again, you might want to dismiss this as a hare-brained scheme, but it is really a male-brained, Man-Plan. Men like to find new uses for old objects. Men like to fix things. Men do not want things just sitting around, serving no useful purpose. There is an entire power tool industry based on these concepts. And it is also the reason behind most duct-tape sales.

Lance saw this as an opportunity to put these rings to good use. I mean, they are just sitting there, right? They aren’t serving any useful purpose. Now I know that many of you will technically consider this theft, but in Lance’s male-brain, he is merely repurposing a dormant object that will bring joy to Linda, who he loves.

He also believes Marla will not be needing the rings soon. Cause, uh, her current boyfriend is going to abruptly dump her, and well, maybe she will never need the rings, being judged to be not “wedding-worthy” at this point. So, the man-logic here is: No one has to know, and no one will get hurt by this. And two people are going to benefit, including me.

(Right here is probably a good time to remind you: I’m not condoning his actions. I’m just explaining them.)

Now I know many of you of the female variety may be asking: How could that dork be so insensitive not to realize the emotional damage done to both women by this horrific action?

That’s an easy one. With one exception, men don’t attach any emotional value to objects. But women do. Women love knick-knacks and scatter them around the abode in excess. There are several industries based on the female attachment to stupid figurines. For men to emotionalize objects, there must be an accomplishment involved: the mounted fish, the Micky Mantle baseball, the bowling trophy.

Tell me what that Precious Moments chick has ever accomplished? Nothing, I say, except for getting you to turn over valuable cash so that you can place her in every frickin’ room of the house. And I pity the fool who accidentally crashes her skull in when he leaps out of his chair with joy when the Packers score that last-second playoff win.

Lance’s plan to get hitched initially went off without a hitch. Linda enthusiastically accepted his proposal which included the offer of the $6,000 ring set. She was so enthralled, that she announced it on Facebook with a picture of that big ol’ ring. Marla was not so much enthralled, as enraged, when she visited Linda’s page after hearing Lance’s engagement, and recognized her jewelry. 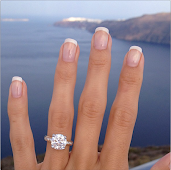 situation. But I do know what Lance’s first statement was:

What were you doing on Marla’s Facebook page, to begin with?

This is because once a Man-Plan is developed, it is perfect in his mind. After all, the male-brain developed it using man-logic. Any failure of the plan is not because there were any faults in the logic; it is because someone, usually a female, interfered with its successful execution.

When a Man-Plan goes wrong, the male-brain will try to deflect all responsibility for the outcome:

Deflection is the natural male response to most all failures in life. Deflect, deflect, deflect. Men's ability to deflect things explains why there has never been a female goalie in the history of professional hockey.

Both women severed their ties with Lance, and police issued an arrest warrant. But there is still one large unanswered question: How did poor Lance even know about the engagement ring and where it was kept? Maybe Marla had flashed the diamond at Lance, hoping she might entice him into a proposal. If that is in fact the case, Lance should hire Saul Goodman and claim entrapment.

And I hope Linda will reconsider. Look, Lance did choose you over Marla, didn’t he? You did win his heart. And Lance did come up with a Man-Plan to present you with the most beautiful ring he could find, even risking his freedom in the process. Are the means with which he obtained this rock all that important? But of course, I’m not defending his actions. I’m just explaining them.