Your Check Is In Postal Purgatory

I was thrilled to get a holiday card in the mail on February 2. I thought maybe Groundhog Day cards were a new thing this year because of the plague, and was excited to receive one from a co-worker in Indiana. But when I ripped open the envelope, I saw this picture card featuring the woman’s family and cat. There was no picture of a groundhog anywhere. I was confused until I saw “Merry Christmas” at the top of the card.

The letter was postmarked December 18, which means it took only 46 days to get to me. I think postal service was probably speedier in 1863 when mass delivery began. At first, it was amusing when tardy Christmas cards began arriving in early January. Then they kept trickling in throughout the month. It did give me the chance to experience the spirit of Christmas joy for several additional weeks.

“On the third week of Christmas, my plumber sent to me, a card with a festive green commode.”

But now it has gone much too far. I stand here staring at this card. Am I expected to be able to relive last Christmas over and over again, seemingly forever? Ironically on Groundhog Day? I think not.

These smiling faces and cute pets may have generated glad tidings at Christmas. But no more.

NOW IT IS JUST A FLIPIN’ WASTE OF TIME. I’LL NEVER MEET THESE PEOPLE AND I DON”T CARE WHAT YOUR PET LOOKS LIKE! NOT IN THE LEAST! IT’S FEBRUARY – FLIPPIN’ FEBRUARY! PLEASE, PLEASE MAKE IT STOOOOOOOP!!!!!!!!!

The only consolation is the cat on the card is as fat as a groundhog. So maybe it is wishing me a Happy Cathog Day. If the cat sees its shadow, there is six more weeks of tuna.

Postmaster- We have a problem!

Now the problem is, the postal service is running a bit behind. Trying to delivery a huge surge in Christmas packages resulted in a huge backlog of other mail. Their response to the problem was not hiring more people or working more hours but: “Hey, just those on the pile over there”. And we know it is a pile, because what gets delivered on any given day is somewhat random.

It’s like when Newman in that Seinfeld episode refused to deliver the mail. So, in December, the entire postal service went “Newman”. Okay, all of them except my friend Gary and the hot blonde who delivers my mail. (I always order more packages in the summer so she has to run up to my house in those cute blue postal shorts, but I digress). Yes, my carrier does an outstanding job! And I say 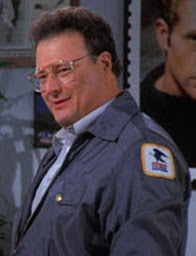 this because I don’t want to see my daily mail scattered across the road if she happens to read this.

But the big pile o’mail is causing big problems. My friend Stefanie mailed her mortgage payment on December 23 and had to explain to the bank why it hadn’t arrived four weeks later. These days saying “the check is in the mail” is akin to “you’re check has gone to hell,” or at least it’s stuck in purgatory.

I thought all these late Christmas cards and people dealing with tardy payments was amusing until …..

And Then It Got Real

I was making an on-line purchase when my credit card was rejected. I tried three times, but it came back with a message, “Your credit card has expired.” I was furious because my card's expiration date is more than two years away. I immediately call the credit card people.

It’s after hours, so I get the call center. Which all I will say, is not located in these United States. The woman informs me that a company where I had used my card had a data breach, so they canceled my card and issued a new one.

Me: Why didn’t you tell me you did this. (snarly!)

Card Rep: Oh, we mailed a notice right away, Mr. Ake. And then we mailed you a new card a couple days after that. You should have gotten your new card more than a week ago.

Me: My mail service is late, and I never received any notice. And now I don’t have a credit card!

Me: What mule are you talking about?

Card Rep: In my village, it takes about five days for the mule to bring the mail. But when the mule dies, the mail is late. Then they must use the goat instead, and the goat is very slow. The goat takes nine days. How late is your mail?

Card Rep: Oooooh Nooooo! All your animals have died! The Covid has killed them all. Blessings on your village, Mr. Ake.

Me: So, my new card is stuck in a big pile of mail at a postal center, and you can’t reactivate my old card. So, I’m screwed, right?

Imagine a world where your checks are stuck in Hades and your new credit card is buried at the bottom of a huge pile of junk mail. And Newman is your mail carrier. This problem will persist until the mail pile is gone. But then maybe it starts all over again next December– better mail those holiday cards and packages early. Perhaps by July 4!

Fortunately, my card arrived about a week after my phone call. But it should be duly noted that it still took 17 days to arrive, or eight days longer than the village goat. However, the notice telling me my card is canceled is still somewhere in that pile. And this whole incident has been a large pile of, well, you know ……