Gather ‘round children, all you adult children, that is. Your Uncle Don has another story for ya. This ain’t a Christmas story, though, but a story of the historical significance type. You see, after Uncle Don’s post about his cool ‘70s platform shoes, people be a clamoring for more writin’ about ‘70s fashion. But ‘70s fashion is an oxymoron, which means you are a oxytstential moron to believe in it. So, I will try my darndest to explain why people dressed like fools in that decade.

The so-called ‘70s fashion had its beginnings in the ‘60s. Them hippies in the ‘60s were all non-conformists in every way. They talked different, they thought different, their music was different, and, of course, their clothes were different. And most importantly, they took lots of exotic drugs.

Now, these drugs were not like those wimpy so-called designer drugs of today. No, we are talking hard drugs, children, which included something called Lysergic Acid Diethylamide – LSD for short. This stuff was so potent that it could alter your DNA. It was so heavy they didn’t take it like a standard pill, they had to drop it. It allowed you to take a trip without ever getting on an airplane. The hippies also took stuff called hallucinogens, extracted from mushrooms and cacti. These could cause you to see three-headed monkeys playing violins made of strawberries.

As we moved into the next decade, the children of the ‘70s decided that they liked their original DNA and didn’t really enjoy those fiddle-playin’ monkeys. They traded in their acid for weed, but in order to still be non-conformists, they decided to dress as if they were still on the hard drugs of the ‘60s, even if they weren’t.

The most emblematic of these fashion statements were “bell-bottom” pants. Now children, the pants contained no actual bells. They didn’t ring as you walked down the street, ‘cause that would have been so annoying. No, the pants were just like regular pants until you got to the bottom of the pant leg when they morphed out into the shape of a bell for some reason. It made no fool sense at all! It takes up extra fabric and can cause you to trip, especially in those clunky platform shoes. The pants indeed looked LSD-induced hideous. But one person started wearing them, then another, and another. And before long, children, every kid in the ‘70s, was sporting the bell-bottoms. I reiterate, those bell-bottoms never rang, but were still worn by ding-a-lings.

Another popular style of pants had the pant leg bottom extended out in the front anywhere from 4-to-12 inches. They was called “flares”, children. Not because the pants were on fire, but because the pant legs flared out. An odd characteristic of flares is that they caused you to flick out your buttocks when you walked in them. So, the children of the ’70s were flicking their buttocks all other the place for no darn reason at all.

If you were wearing either of these ‘70s style pants with your platform shoes, it caused you to do that ‘70s strut, made famous by John Travolta in Saturday Night Fever. If you walked down the street strutting like that today, some people would call 911; others might offer you some hemorrhoidal cream.

But those weren’t the only bizarre pants of the 70s, children. Uncle Don had a pair of light green plaid trousers, with cuffs. As tall as I am, that was a lot of green plaids! I also had a pair of jeans featuring vertical ridges that ran from top to bottom. This was not your Uncle Don’s best fashion moment, children. And he is so glad there are no are absolutely no photos of him wearing these awful-looking pants. (Uh, Linda, if you do happen to have any said photos, please message me, and I can Venmo).

I know this all sound too weird to be true, but the bizarre pants, silk shirts – with ridiculously wide collars, of course, and the platform shoes, were the official uniform of the ‘70s. It was how you presented yourself as a cool guy, worthy of attracting a cool chick.

Your Uncle Don wonders what would happen if he could put on his green plaid pants and the rest of his ‘70s attire and strut into the bar scene today?

Bartender: (freaking out) May I help you?

Bartender: Uh, I think the bar you are looking for is a couple of blocks down the street.

Bartender: I think that ship cruised off almost 50 years ago.

That 70s Guy: Hey, this used to be considered cool.

Bartender: Oh, I think it’s been lukewarm for a long time. Are those pants green by design or just moldy?

That 70s Guy: Do you play any disco? I’m just stayin’ alive.

Bartender: If you want to stay alive, don’t do any disco, and you better leave before the bikers get here.

That 70’s style even extended to casual wear, children. And Uncle Don even has a picture of that. Recently, I posted this photo of my friend Bob and me from July 1976. Of course, my Facebook feed blew up with all these comments about our short cut-offs and striped socks, which by the way, were normal casual wear in the ‘70s. 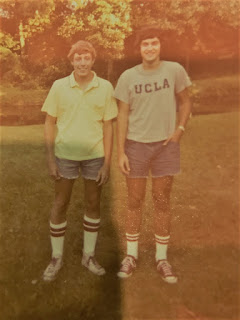 All I can say is: When did we get all puritanical about guy’s thighs? Is not the purpose of wearing shorts in hot weather to keep your legs cool? Yes, our thighs were exposed, but our legs were cool. You can’t even call some of what is worn today “shorts” because they are not short; they are “longs”. And it’s even worse when a hot chick wears these long-shorts, because you can’t even see her, well …  and they don’t even fit that tightly! What in the name of Catherine Bach (aka Daisy Duke) is going on here?

And your socks had to be long, with two stripes. Not one, not three, just two. Don’t even think about leaving the house with stripe-less socks – no one would pick you for their team if you wore plain socks. In the 70’s, it was short shorts and long socks. Now it is long shorts and short socks. Go figure, children.

Now children, I know this exploration into the fashion styles of the ‘70s has been confusin’. I can describe it, but I can’t truly explain it. And I was there! I lived it. I breathed it! And unfortunately … I wore it.