Exploring the weirdness of the '70s would not be complete without discussing the music of that era. So gather round again, children – you adult children. Uncle Don has one more ol' story for ya.

Some of the best music ever, was recorded in the '70s. Unfortunately, some of the worst music ever was produced then also. To put it in more literary terms:

Like '70s fashion, the origins of '70s music was rooted in the hippie movement and the hard drug use of the '60s. Those hippies could belt out some excellent tunes when they were high on mind-altering drugs, but they stopped producing hits when they stopped tripping. The classic example is the Beatles. Once the drugs wore off, they no longer could hear and play notes no regular person could imagine, and they quit seeing visions of endless fruit fields. The exception here are the members of the Rolling Stones, whose drug use didn't kill them and apparently never wore off, permitting them to be perpetually high, and perhaps live forever.

Once the '70s began, all the decent rockers were burnt out, or still sleeping off their drug binges in communes. The airwaves were filled with what was called soft-rock, which is a lie, children! It wasn't rock at all. It was stuff designed to put you in a musical coma. It was a form of cultural anesthesia. It was a melodic morphine drip.

And the prominent purveyors of this woeful sound were all phonies. There was a group called the Carpenters, but they didn't build nothing. There was Carol King, but she wasn't royalty. And the former Beatle, known as Paul, was reduced to singing silly love songs. The weirdest act was the Captain and Tennille. The dude wore a sailor's cap, but he wasn't the captain of anything. Maybe he did own a yacht, paid for by the huge profits from these horrible songs, including a "hit" about rodents having sex. And he didn't even sing; he just benefited off his wife's tremendous lungs – and legs. But children, I digress.

So, there was this constant stream of pablum dripping out of stereo speakers, putting the children of the '70s into a deep sleep. No one was producing any energetic tunes at all.

Well, nature abhors a vacuum, children. Not like a Hoover, though.

But nature would learn to abhor the music of the '70s even more!

Into this calm, boring, serene musical atmosphere, something called "disco" burst upon the scene, jolting people awake like a triple espresso on speed. Gloria Gaynor's "Never Can Say Goodbye" is credited as the first disco hit in 1974. Then the disco craze spread like a virus.

Every aspiring musician was laying down that disco beat. Unfortunately, you didn't have to be talented; you just had to have energy – or speed. In fact, one of the most famous disco artists was not even a person, children; it was some sort of insect called a "Bee-Gee". This bug could sing tremendous three-part harmonies and, when you squeezed it, would sing in falsetto.

Some of this music was the worst ever recorded in the history of mankind. I know you still hear some of these songs on the radio today. But remember, children, what you hear today is the very BEST of that era. The worst of the era was terrible, children - really, really terrible. The worst disco song ever was called "Disco Duck", and this insult to your auditory nerves actually made it to #1 on the charts. I believe the original studio tapes of most of the disco songs of the '70s are in a Jersey landfill, strategically buried on top of Jimmy Hoffa, because no one ever is going to dig them up.

Now, if the music wasn't bad enough, children, when my generation, the children of the '70's, emerged from their soft-rock induced comas, they started dancing, and signing, and movin' to the groovin' in the worst way possible. It was called "disco dancing".

It was like some evil force was controlling us:

"Ahh, we made them dress stupidly. Now we make the dance stupidly – while wearing their stupid clothes! Oh, don't hurt yourselves boogying in those high platform shoes. Baawaaaah ha ha ha!" 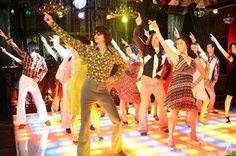 Unfortunately, the children of the '70s were exposed to so much disco music that it is deeply ingrained in our brains. If we hear any disco music, our bodies are programmed to respond.

So children, if you see some boomer making weird gyrations in the street. Please check to see what music is blasting through his earphones. He's probably not even sick, but he just has night fever, night fever, and he knows how to show it. Likewise, I'm in favor of police granting waivers to any older speeders clocked going over 90 mph if KC and The Sunshine Band is blasting through the stereo.

But this latent disco effect can be harmful. After we played "Shake Your Booty" at our last class reunion, we were visited by police because neighbors thought they had experienced an earthquake. I guess our bootees have grown a bit since the '70s. And I hope they never play "Get Up and Boogie" at any nursing home because the result would be tragic.

However, the disco effect could also be used for good:

Well children, that concludes our look back at the crazy decade of the '70s. But you can be sure that '70s disco music will be heard until the last child of the '70s is laid to rest because we will:

whoaaaa, 'til we die.

Well, you can tell by the way I use my walker

When my are teeth in, I'm a talker

I've been breathin' in

Since I was born

And I'm all right, I'm okay

My vitals are just fine today

And I can stand my maladies

Cause I got Medicare Plan B

Whether you're a geezer

Or whether you're a sneezer

Bones that are break'in and hand's that are shakin'