Hey! Ya Gotta A Mouse In Your Pocket?

A couple of months ago, the Internet blew up when a celebrity announced “they” had just identified as “non-binary”. Of course, I was so confused by this. Unless you are a computer programmer, we all use non-binary numbers in our everyday lives. It would be terrible to put 1000001 on a speed limit sign. It would be confusing, and you would need a larger sign. I mean, we are all non-binary, aren’t we?

Then somebody told me it had to do with sexuality. But I became more confused. Why would you have to declare yourself non-bi, when again, most people are non-bi. Then she explained that it meant the person was not identifying as a man or a woman, and their sexuality is fluid.

Now I still don’t get why you must publicly announce this decision. Can’t you let this sexuality flow all over the place in private? Apparently not, due to the requirement that you and the non-binary person both use a specific set of gender-neutral pronouns when communicating. These include “they, their, them, we, us, our … and others.

This makes it difficult for people with fading memory capacity, like me. For example, if I meet a guy named Ralph at a party, I will forget his name, unless of course, he happens to throw up later that evening. Likewise, I’ll forget Melanie’s name, unless she has huge …. Well, you know… I’m not ever going to be able to remember who is non-bi. I just can’t. And to learn when and how to use all those pronouns? I may as well try to learn Swahili.

I also dislike when people use plural pronouns when it should be singular. Back in high school, some total losers would try this maneuver to puff themselves up and appear bigger and more prominent than they were. For example:

“We don’t think that is a good idea.”

To which we would always respond:

So, I suspect these people might be trying to puff up their egos with all this plural pronoun stuff. They may think they are that important, but according to the Backstreet Boys, that’s not what makes you larger than life. – Or even plural in this case.

And what’s with the big “identification” craze anyways? Hey, if that’s the way it works, I’m identifying as “King of the World”! And if I do that, everyone must accept it, right?

Stupid Waif: Hey, you can’t cut to the front of the line!

Me: Of course I can; I’m identifying as the freakin’ King of the World!

Police Officer: Do you know how fast you were going?

Me: That’s so irrelevant because I identify as King of the World! Not get your @ss back in your cruiser cause I got places to go!

Uh, maybe I’ll give that a try. Won’t start with my wife, though.

But there is an easy solution to this problem. You don’t need to memorize all those pronouns. You only need one. Just one, covers it all. Because there is a long-term precedent here that most people are familiar with.

Yes, these trendy celebrities believe they invented non-binary, but they are sadly mistaken. Over 57 years ago, somebody was the original non-binary being.  On the Addams Family show, we were introduced to creepy, kooky, mysterious, spooky, and altogether ooky, Cousin Itt. Itt’s body was completely covered in hair, and Itt’s voice was androgynous. Itt’s sexuality could be flowing all over the place on a daily basis, and you wouldn’t be able to tell - you can’t get more non-binary than that! 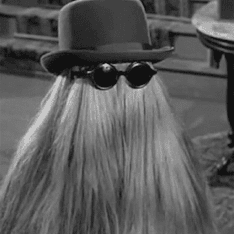 So, if you identify as non-binary, I will consent to use all your plural pronouns on one condition: That you do indeed have a mouse in your pocket. And I do want to see the mouse. There is no honor system. I will need to see the actual mouse and, very importantly, that the mouse is indeed alive. Then, you can we, they, us, them all you want.

But if you do not have a mouse in your pocket, I will stand on the precedent created by the Addams Family and refer to you according to the precedent established by Cousin Itt. I will not call you cousin, unless you are truly my cousin, because that would imply you have some excess hair growth, which is fine on the days you are feeling masculine, but not so much the other times.

And be warned. If I am ever required to identify in this manner, I’m identifying as binary – with a penis - and a big one at that.