I Cry “Fowl” – But the turkeys are innocent

There have been lots of changes in the neighborhood over the past year. This impacts me since I work at home and am now middle-aged, which means change irritates me. I can remember years ago laughing at those old fogeys who would get riled up over any type of change. But I’m not laughing anymore.

The new neighbor behind me cut down the woods. The view is much different, but in some ways better. Possibly because of this, the turkeys only visited a few times last winter. But if you have read “Turkey Terror At My Door!,” you know the turkeys scarfed my birdseed, caused disturbances, and pooped on my deck. So, I don’t miss them much.

My next-door neighbor, the widow Cooper, was put in assisted living. We left on bad terms after the infamous “pin oak incident”. In 2018, I offered to contribute $700 of the cost of trimming her beloved tree. This resulted in a public shouting match, her calling the police, and referring to me as a son of a b!+ch.  Of course, last year, her sons had to pay the entire cost of trimming the tree before they put the house up for sale. I felt like dancing in my front yard, waving fists full of cash, as the branches came down – but I didn’t.

The new neighbors, R.J. and Chelsea, are fine people and haven’t referred to me as a son of a b!+ch or called the police about me. I know what you’re thinking … they don’t know me well enough yet … give it time. But that’s fine; it hasn’t happened so far, so there!

However, in the 26 years I lived beside the widow Cooper, she made virtually no noise. Unless, of course, she was screaming that I am a son of a b!+ch. My new neighbors have two boys and three dogs, which means they make a normal, expected, amount of noise. This summer, I am adapting to this new environment. Sometimes I often need to intensely concentrate when doing my job and now I have to deal with more disturbances.

And I’m sure I sometimes disturb them when I’m bellowing wisdom to customers and coworkers on my speakerphone. The difference is, that my neighbors are getting expert analyses about the economics of the trucking industry for free. That’s right – they are getting the stuff our clients pay thousands of dollars for, for nothing. So, they should consider themselves so lucky.

I’ve learned to work around the normal noise just fine. It doesn’t bother me.  However, there is one particular noise emitted from their property that greatly annoys me. They have chickens. The chickens cluck, and when they do, my concentration gets all clucked up. The chicken noise is agitating, not unlike when your wife is clucking about some inane subject during the critical part of the big game. It’s ironic that now that the turkeys are not an annoyance, I am dealing with a bunch of mother-cluckers. Fowl! I cry fowl!

Even though I never brought up the subject, Chelsea explained to me that Henrietta (all her chickens have names) was dealing with a sexual issue that caused her to cluck frequently and loudly. What am I supposed to do about this? Do I look like Dr. Phil? Okay, so maybe I do, but that’s beside the point. 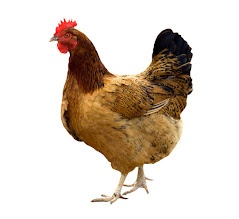 I do admit that when Henrietta is most agitated, I am tempted to walk over and say, “Henrietta, let’s talk about how you’re feeling right now and why, can we?” But, I have a better solution for the chicken clucks, lawnmowers, and other loud outside noises. I play “Deep Relaxation” CDs that allow me to concentrate on my work. One of the CDs even features “calming songbirds”, which means I am using good bird sounds to cancel out bad birds. And this allowed me to live in perfect harmony with the chickens, until ……

A couple of weeks ago, on a quiet afternoon, I took a break from work and glanced out the back window. I did a double-take because I didn’t believe my eyes. There were a bunch of chickens strutting around the back of my property. Those chickens had flown the coop and evidently desired to go free-range, mistakenly believing my yard constituted that freedom.

In a panic, I texted Chelsea. I hoped she was home because I did not want to have to chase the chickens around my yard like some kid at the carnival. I envisioned a YouTube viral video: “Fat, bald guy chasing chickens.”  Fortunately, Chelsea was in my backyard in seconds, approaching the chickens.

(Now, there was no way I wanted anything to do with this chicken capture. But I was trying to be a good neighbor. And the chickens were in my backyard, so I had to ask, still hoping she would say “No”.

“Maybe. I’m just caring for these chickens for a friend until their new coup is ready. But they don’t like me!” Chelsea explained.

(That’s just great! These chickens don’t like the person who is caring for and feeding them. They’re going to absolutely hate me)

Then to my horror, Chelsea reached down and scooped up a chicken. I started to shake, expecting her to shout, “Don’t just stand there! Grab a chicken.”

I quickly imagined myself in the hospital emergency room ….

Doctor: What wild animal did this much damage to you?

Me: It was chicken.

Doctor: What did you do to provoke such an attack?

Me: I grabbed it in the wrong place.

Doctor: What type of perverted idiot are you?

Fortunately, with the lead chicken in tow, the rest of the chickens dutifully followed Chelsea back to the coop. Crisis averted.

But life is just a bunch of trade-offs, children. Those extra chickens are now happy, and over-producing eggs, which resulted in R.J. delivering two dozen fresh eggs to my door the other day. Now that ol’ clucking doesn’t irritate me much at all! Henrietta, you rock! Because, I love eggs, and now I’ve got eggs!

He’s got eggs, he knows how to fry them

They’re fresh eggs, he can’t wait to try them

He’s cooking eggs, wonder how to fix them

Would you do an omelet if you could not hard boil them?

They're my breakfast, they're my dinner