And that ain't what it takes to love me”*

I grew up a city kid – paved streets with drains, sidewalks, streetlights, municipal water. It was quite an adjustment for me to move to the rural suburbs twenty-some years ago. Fortunately, my wife grew up in an area very similar to our current abode and has guided me over the years.

For example, the first weekend in the country, I heard a strange howling coming from behind our property. I summoned her and asked:

“What type of animal is doing that?”

She got a bizarre look on her face and replied, “That isn’t an animal.”

And she was correct. This was our first encounter with our backdoor neighbor, who would howl at the moon, do fire dances, and claim aliens had abducted him. I wish I were making this up – but I’m not. Fortunately, he moved, or was abducted for real, two years ago.

And if you remember, my wife had to identify the first wild turkey to show up on our property for me. I though it was just a big, hairy pheasant.

Over the years, this city boy has become accustomed to many critters showing 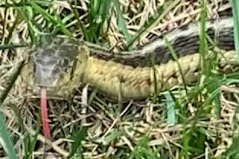 up on the property. However, I was still taken aback a couple of weeks ago when I encountered a five-foot snake near the walkway in front of the house. I quickly sent a photo to my wife because I would not be there when she arrived home and feared she might get attacked.

It turns out that it was just a garter snake, although a big one. My wife was not impressed by the photo and told me I had nothing to fear, that even if it bit me, it wasn’t poisonous, so no big deal. She seemed to want me to remove the snake, but I then reminded her of a past

Such A Small Creature

Around 15 years ago, I had finished my evening tasks and headed down to the family room to watch the baseball game. But then, I saw the dog standing at the deck door needing to go outside. I let the dog out and walked onto the deck barefooted.  I didn’t put on shoes because I didn’t know how long the dog had been waiting. Of course, after the dog finished his mission, he wanted to play. So, I threw the soccer ball off the deck and walked out onto the grass. I played with the dog for a short time and then jumped in my easy chair and turned on the game.

After a while, I felt an irritation on my toe. I wondered if I had stepped in something that was causing a rash. But then the discomfort grew in intensity, so much so that I went upstairs to examine my foot. I sat down in the bathroom and felt something stuck to the underside of my second toe. I pulled it off and saw a tiny spider scurry across the floor. Instinctively, I quickly smashed it, thinking that was the end of that, and returned downstairs.

The following morning, my toe and a small area of my foot were inflamed, and there were a few fluid blisters.  I was not that concerned since this spider was tiny, about 3/8” in diameter. How much damage could it do? However, I remembered reading that spider bites might require prompt treatment, so I called my doctor as soon as I arrived at work. I was able to snag the last appointment of the day for 4:45 p.m., but the receptionist asked me my current condition and then cautioned me that if the redness started spreading to my ankle, I should go to urgent care. Fine, but I did not expect to need any “urgent care” because it was such a tiny spider – how much damage could it do?

I checked my foot mid-morning, and nothing had changed. However, I went out to lunch, and during that hour, my condition deteriorated rapidly. First, the irritation greatly intensified. Then it felt as if my foot was on fire. I removed my shoe at some point because of the discomfort.

When I got back to the office and removed my sock, I was aghast at the sight. About half my foot was now bright red and covered with huge, seeping blisters. And the redness had now spread to the base of my ankle. I canceled my meetings for the afternoon and headed to urgent care. But still, I was not worried because it was such a tiny spider – how much damage could it do?

As I sat it the patient waiting room, I propped of my barefoot up on a chair. After a few minutes, a young, woman doctor, all perky and enthusiastic, bounded through the door.

“What can I help you with today?” she exclaimed.

I pointed to my foot.

(What happens next is what really happened. There is no exaggeration here at all)

After seeing the condition of my foot, she actually took a step backward, and with a horrified look on her face, stammers, “We, we, we can’t uh, uh, ha-handle that here. You need to get to the hospital emergency room now!

It’s hard to describe the psychological effect of having a medical doctor recoil and be repulsed by your physical ailment. You would have thought they would have been taught in med school to keep their composure no matter how gross the spectacle. I was now officially worried.

But, I actually didn’t go straight to the hospital. I stopped back at work near the hospital for a minute to send an important email or two. Then it was off to the emergency room and a second set of paperwork and some more waiting.

The hospital emergency room was set up with beds along the wall with curtains on each side of the bed to provide privacy. The area in front of the beds is open, allowing the doctors and nurses to move freely from patient to patient. I sat on the side of the bed, with my foot dangling over the front. Because I was sitting up and not in any obvious pain, several nurses stopped by and asked why I was there. When I showed them my foot, their facial expressions told me my condition was terrible, really terrible.

At that point, panic set in. I wondered if I was going to lose my foot. I imagined walking with a cane for the rest of my life. However, when the doctor arrived, things quickly improved. He was a relatively young physician from India. Now I know some people are nervous about foreign doctors. It doesn’t matter to me – either you are competent, or you’re not. And in this case, a physician from India was just what the doctor ordered.

He looked at my foot, and smiled broadly. “Looks like a little spider nibbled on ya,” he said calmly. As much fear as the previous doctor had created, this guy had immediately vanquished.

The Indian doc was not shocked by the condition of my foot at all. You see, when you have previously treated bites from cobras, tarantulas, pythons, and huge brown-widows, this itsy, bitsy spider bite is not impressive at all. And because he had seen far worse, he had treated far worse. He knew exactly what to do. Some potent antibiotics and prescription ointment, and my foot was completely healed in about three weeks.

So, I will not be challenging this huge garter snake and I won’t be walking near it barefooted either. Better to leave the big snakes in the grass alone.

‘* by Jim Stafford and David Bellamy