Do Not Criticize My Boomer Shoes

Recently I succumbed to some clickbait on one of those articles about “20 Stupid Things Boomers Still Do But Shouldn’t”. Of course, it is written by a Millennial chick who apparently doesn’t have anything better to do than make fun of people of a certain age.

It’s kind of quaint when you think about it. You see, most Millennials are stupid. Well, maybe not stupid as much as ill-educated. That’s because we Boomers decided we would like to spend all the tax money on fancy new sports stadiums instead of boring old schools. So, you sat in wretched buildings receiving substandard education from woefully underpaid teachers so that we could sit our hineys in comfy club seats, with cup holders, at the big game.

Your college education was also inferior because they had to lower the standards for all sorts of silly reasons. The most amusing part is that you don’t know what you don’t know, and you know less, even with the Internet, than boomers did at your age. Oh, and by the way, we used your Social Security contributions to buy lots of stuff. What stuff? I forget, but we blew it all on stuff. So, you will remain ignorant and will be paying for all our stuff, long after the last Boomer is laid to rest. But it’s not that articles written by Millennials making fun of Boomers irritate me in any way.

But back to the article. It included the standard items as having a landline, mailing payments, etc. However, this article did list some new stuff, such as “Boomers Still Carry Briefcases”. I already was aware of this one. At my last office job (I now work at home) eight years ago, I noticed I was the only person in the company who carried a briefcase. The younger guys carried backpacks, and the older guys didn’t need to because their heads were empty, and their briefcases would have been also.

But my briefcase was essential to me. It contained my newspaper, whoops another Boomer oddity, and other necessary objects. Okay, let’s face it, it was my man-purse. But it was large, leather and macho. And ironically, I did keep a spare pair of actual briefs in my briefcase. Because, men of a certain age sometimes experience unexpected occurrences, necessitating a change in, a change in, - a change in plans.

Also, a briefcase has many different functions. For example, the office supply usage at that last in-office job I had, unexpectedly skyrocketed the last few weeks I worked there.

Accountant: Why did the office supply costs quadruple in October but return to normal in November?

Office Manager: I have no idea.

Officially, I have no idea either. All I know is that they shouldn’t have tried to cheat me out of some unused vacation days. Oh, and if anyone needs some pens, message me.

Yes, the article was amusing until I got to #14 – Boomers Still Wear New Balance shoes. Now they had crossed the line. Now they had raised my ire. And even if it is now more challenging to raise other things, I can still erect some pretty impressive ire. This one struck a nerve because I had just purchased a spiffy new pair of shiny, white New Balance 608s the previous week.

The writer’s first criticism of New Balance is that they are not stylish. No, they are not, nor do they have to be. Back in high school, I had to wear my white Converse high-tops year-round. I needed high-tops for basketball, and my parents insisted I get my total value out of them. 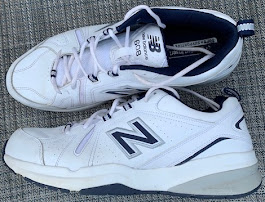 When you’ve look hideous wearing high-tops in the sweltering summer heat, you do not consider athletic shoes a fashion item. And give us Boomers credit for not falling for the scam of paying $150 for Air Jerkins that cost under $20 to produce by using slave labor in Southeast Asia. I attribute that back to our superior Boomer education. Oh, and by the way, New Balance is lauded for its ethical labor practices and is the only major manufacturer to produce some of its shoes in the U.S.A.

Boomers don’t want to make a fashion statement with our athletic shoes. We certainly don’t want to wear some of the new hideous, over-priced, cheaply-made crap that may be popular today. We prefer that others don’t even notice our casual shoes.

The second criticism of New Balance is that the shoes are “clunky”. And yes, yes, they are! They are designed to be clunky, extremely clunky. Now, I know this is a horrible feature for a Millennial. If you want to walk fast or even run, clunky shoes will slow you down. But Boomers are no longer in a hurry to get anywhere. In the words of Mumford & Sons, “I walk slow”.

New Balance shoes are heavier because the Boomers wearing them are dealing with: bunions, corns, calluses, hammertoes, ingrown toenails, plantar fasciitis, and heel spurs. I realize you youngin’s don’t know what these are, but you will. Trust me, you will. And the extra padding and bulk of the New Balance shoes provide comfort to these aging dogs.

You see, New Balance shoes are made for Baby Boomers and marketed to Baby Boomers. It’s called target marketing, and you may have learned about this in college if you actually went to class that day.

Oh, and one final thing, did you catch the name “New Balance”? The other reason the shoes are heavier is that older people have balance issues and sturdier shoes provide more stability. They couldn’t really call them “Old Balance”, so they went with New Balance. It’s marketing brilliance!

So, you go ahead, Millennials, buy your fancy, flimsy, over-priced footwear. But for my Boomer crew, we will remain upright and comfortable in our New Balance shoes!

Cue A-Key and the Sunset Band!

Squirrels to be with you is my favorite thing, oh yeah

I can’t wait to stroll in the park again, yeah, yeah

Just to boomer with you, yeah

Just to boomer with you, uh huh