WOW! – These Chips Were Nasty

A blast from the past …

Literally, a blast from the past ….

The year was 1998, and I was so excited when Frito-Lay introduced a new brand of fat-free potato chips called “WOW!”. The chips were made with a revolutionary new “fake-fat” called Olestra.

I just love potato chips. Of course, that means I eat too much of them, and because they are deep-fried in cooking oil, they contain lots of fat and are bad for you. I was enthralled at the possibility of eating potato chips which were “healthy” because they contained no fat – no fat at all - and promised to taste 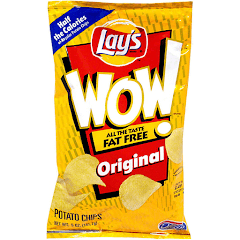 The only possible drawback is that Olestra could cause gastric issues in some people. So much so, that the package was required to have a warning on the label that read:

"This Product Contains Olestra. Olestra may cause abdominal cramping and loose stools. Olestra inhibits the absorption of some vitamins and other nutrients. Vitamins A, D, E, and K have been added.”

Now, this did concern me since my secret code word for that bodily function when I was a kid was “wow”, in the sense of “Mom, I have to go wow.” I don’t know if I remember that because my mom later told me, or it stuck in my brain in some Freudian way.

But the opportunity to enjoy fat-free chips clearly overrode any concerns about side effects. As soon as WOW! chips hit the stores, I rushed out and bought two big bags.

Now you probably know how this ends up, uh. Okay, you probably know where this is going – uh, still not right. Okay, I may be an idiot, but I am not a total idiot. I knew there was a risk eating these chips. I only ate a few the first time; I ate some more the next time. I think I consumed the first bag in five portions, and except for a very slight reaction after the second helping, everything was great. These chips tasted tremendous and were fat-free! WOW! I say, just WOW!

Now that Friday night, the Boston Celtics were playing a big game, so I grabbed a bag of chips, plopped down on the couch, and turned on the TV as I normally would. I didn’t even realize I was eating the WOW! chips. I guess I just considered them to be regular chips, just like any other. It was an exciting game, and sometimes I snack more when I get nervous.

During the fourth quarter, I noticed I had eaten almost the whole bag. I then realized these were indeed WOW! chips and immediately, I became worried. I mean, they look like real chips and they taste like real chips. How was I to know?

I reasoned that if the chips had not caused a problem in small quantities, I would be fine consuming them in larger quantities. Nothing to worry about here!

However, Saturday morning, I awoke with intense abdominal cramping, feeling like my intestines contained a bomb ready to discharge. It was not so much explosive diarrhea as it was nuclear diarrhea. I held on to the  commode as one grips the bars on a thrilling roller coaster, lest I get propelled up through the ceiling. It’s like the experience of cleansing before a colonoscopy, only much more intense.

Loose stools? There were no stools, not even close. And, loose? Loose as  water is loose at Niagara Falls. Loose as air is loose in the atmosphere. Loose as Dolores Rogers was in high school.

After the explosion, I was glad to be alive. But due to my love of potato chips and my overflowing optimism, I still believed the WOW! chips had potential.

“I ’m glad that’s finished. Maybe I can still eat these chips in small quantities”, I reasoned.

And I did think it was finished, that the Olestra had been purged from my system, and I could resume normal activities. But I was wrong, as they say on those cheesy television commercials:

A few hours later, I had a second explosion. Not nearly as intense as before, but uncomfortable. Then a couple of hours later, another, and another. This continued through Sunday, and I really hoped it would stop before I returned to the office on Monday.

But Monday, the blasting continued. Unfortunately, my office was on the second floor, and the bathroom was on the first floor (they circumvented the building code when they built the second-floor offices). I didn’t want any of my co-workers to know about my embarrassing problem, so I would casually walk all the way down the hall but then run like mad down the stairs before rushing into the restroom for still another explosion.

This pattern continued for a couple of days, and I thought I had been successful at concealing my problem, until one day when I was headed downstairs, the department receptionist stopped me and asked:

“Don, are you feeling okay?”

“Because you’re green”, she replied.

“Really?” I protested, still trying to fake it.

There were two other women present in the conversation, and all three nodded their heads in agreement. Busted - so busted. So, I explained to the ladies how I had managed to turn green. Massive giggling ensued.

Immediately, I went into the restroom and examined myself in the mirror. And the ladies were correct. I was green. Not like the Hulk or the Green Giant, but I was greener than just around the gills. And as Kermit The Frog once said: It ain’t easy being green.

The discussion with my co-workers served as an intervention. Looking at my greenish reflection convinced me I needed medical help. I explained what had happened to my doctor, hoping to get a kind, empathetic response, kind of like Doc on Gunsmoke when Festus had accidentally shot himself in the foot. Or at least Marcus Welby. But I have never upset a doctor more in my life:

I started to answer. I wanted to explain how I loved potato chips and these were fat-free, and then there was this basketball game …. But I didn’t realize the doctor’s question was rhetorical.

I felt like a three-year-old who had got caught eating dirt. When he calmed down, the doctor explained that my body was attempting to expel every molecule of this foreign substance from my body.

But then, this totally bizarre predicament got even weirder. “Now, we need to blow out your colon,” the doctor said. I stared at him in disbelief, thinking I might have to eat that Colon Blow cereal from the Saturday Night Live skit.

“Sauerkraut and bean soup”, I replied.

So, his remedy for me having the shitz, was to give me more of the shitz.  I thought it sounded stupid. Maybe he was just punishing me more for ingesting “non-food”. But he does have a medical degree, and that was the only cure he offered.

And believe it or not, it worked! We did have to fumigate the house, and fortunately, they never quite figured out what died in the bathroom at work. But one of the saddest days of my life was when I had to throw away what remained of that second bag of chips into the trash.

In Wikipedia, it said sales of WOW! chips dropped after introduction because:

And I pledge that everything, including the “medical terminology”, in this post is true, just the way it happened. In other words, it is the straight poop.