Recently residents were all up in arms when a Dollar Store (I will use this term to describe all stores with “Dollar” in their name) wanted to open in their small, quaint, rural township. Their concerns included: a loss of green space, an increase in traffic, big trucks delivering fresh produce, and the potential for more crime.

Now I don’t know the situation, but these concerns sound a bit contrived. This community is basically all green space. There is green space everywhere. So, yes, you would have less green space, but you have plenty to spare. There would be marginally more traffic. Most likely, people would stop at the store on their way to somewhere else. It is unlikely that people would converge upon the store in droves since Dollar Stores don’t have sales; that’s the point of having low prices all the time. And oh, the horror of having fresh produce readily available in your town! Yeah, and refrigerated trucks come in all sizes now.

But the most ridiculous argument is “potential for increased crime”. Now, it is true that Dollar Stores are popular targets for robbers in urban areas. But I doubt that hooligans from the city will drive by the ten dollar stores closest to them to rob this store. And it is doubtful that having a dollar store in town will turn young Timmy into a criminal.

“I had heard about people robbing Dollar Stores. Then one opened up in our village across from my house. It was so tempting that I just had to rob it. I had to!”

Now it’s well known that Dollar Stores get robbed a lot, and we chuckle when we hear this news because we think it’s stupid to steal from a place that sells stuff for just a dollar, or in some cases, a few dollars. How much money could you steal? But upon further examination, it makes sense. Just as Willie Sutton robbed banks “Because that’s where the money is” --. thieves hit the dollar store because that’s where the dollars are.  In the days of debit cards and phone pay, Dollar Stores and convenience stores are the typical places where many people still pay in cash. I mean, the place is called the Dollar Store. If you’re looking for dollars, it’s the place to rob. 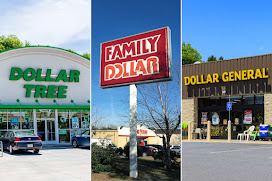 Still, if would significantly improve things if schools taught a class in real-life skills. It could include a section on “Why Robbing the Dollar Store is a Dumb Idea”. Other subjects could consist of “Obeying the Police After Getting Arrested”, “Why Opiates are Bad For You” and “How Many Baby-Mommas/Baby-Daddies are Too Many?”.

But the robbers are not the only dimwits in this story. What about the corporations who own the stores? These places have been getting robbed forever, yet the suits have not instituted enough security measures to deter the thefts. It puts their employees at risk and corrupts innocent youths like young Timmy into a life of crime. Personally, I would have put massive casings over the security cameras to make them look like 1950s television cameras so that the densest robber would know he’s on camera. And there must be a way to manage the cash so only a small amount is available for pilferage.

Your stores are just sitting there saying, “we gots lots of dollars, please rob us!” Maybe, they have made great strides in security. I don’t notice the security features when I’m shopping in a Dollar Store because I’m not planning on robbing the place. And friends, when you shop there, please use your debit card. You will be doing your part to reduce theft or at least reduce the robbers’ take.

The Dollar Store needs to increase security because they will soon be taking in way more dollars. Because of rising costs, one Dollar Store that sold only items costing $1 is raising prices on some things from $1.25 to $1.50. A $1.50! A $1.50!

Question: How do you know inflation is too high?

Answer: When things at the Dollar Store cost $1.50

I doubt if this particular Dollar Store will change the store sign to “Dollar-Fifty Cent Store” Maybe they could ease the pain by hiring the rapper “50 Cent” as a spokesperson. Hey, we’re adding 50 Cent to our Dollar Store”.

But alas, the village does not have to worry about the blight of having one of those awful Dollar Stores in their community since under pressure, the trustees rejected a zoning request needed for construction.

Hurray! Now you can enjoy all that extra green space, traffic keeps flowing smoothly, and you can continue to munch on moldy carrots and brown lettuce.

And the community can rest easy now because a new crime wave is not imminent. Of course, the last armed robbery in the village involved a Colt 45 and a horse.